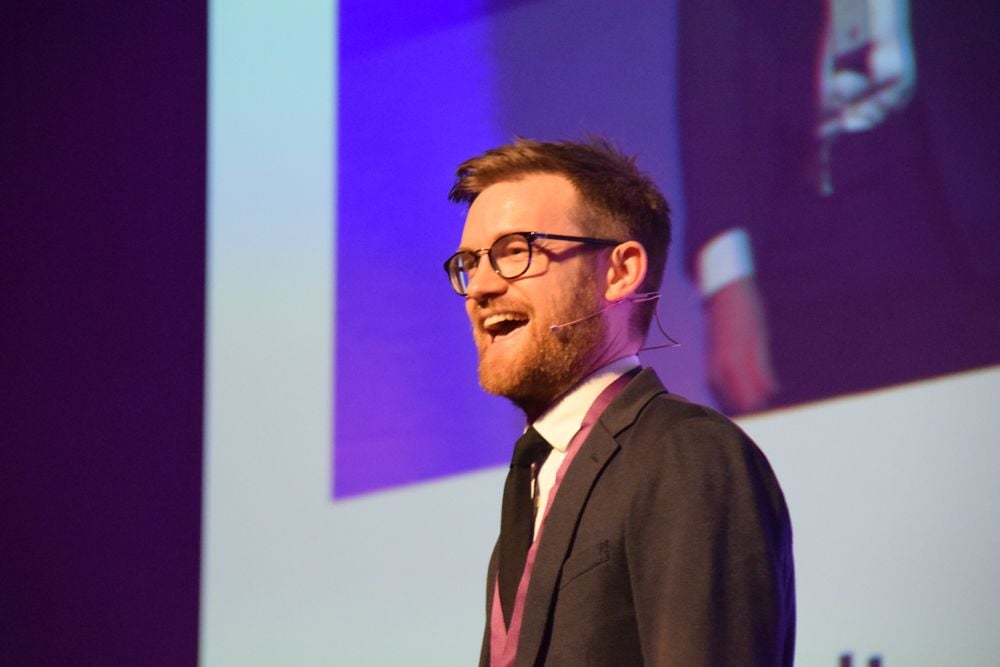 Phorest CEO Ronan Perceval welcomes approximately 600 owners to the Salon Summit, telling them the day's education was designed to help them grow their businesses in 2019. 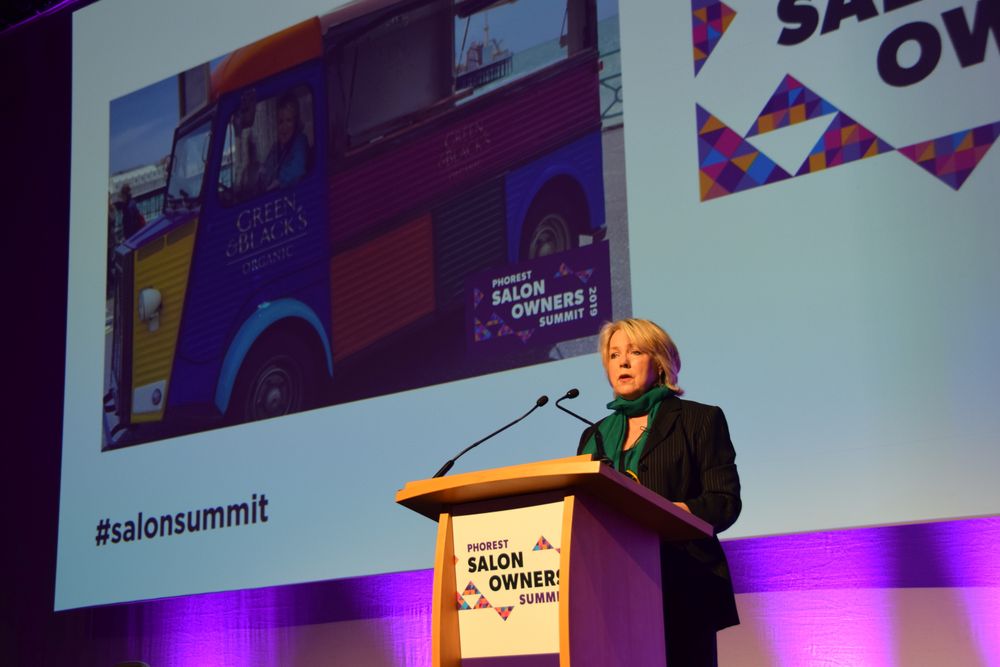 Jo Fairley, founder of the organic chocolate company Green and Blacks, shows a picture of herself driving the company van that passed out samples. "When it comes to publicity, every square of chocolate was worth 1,000 words." 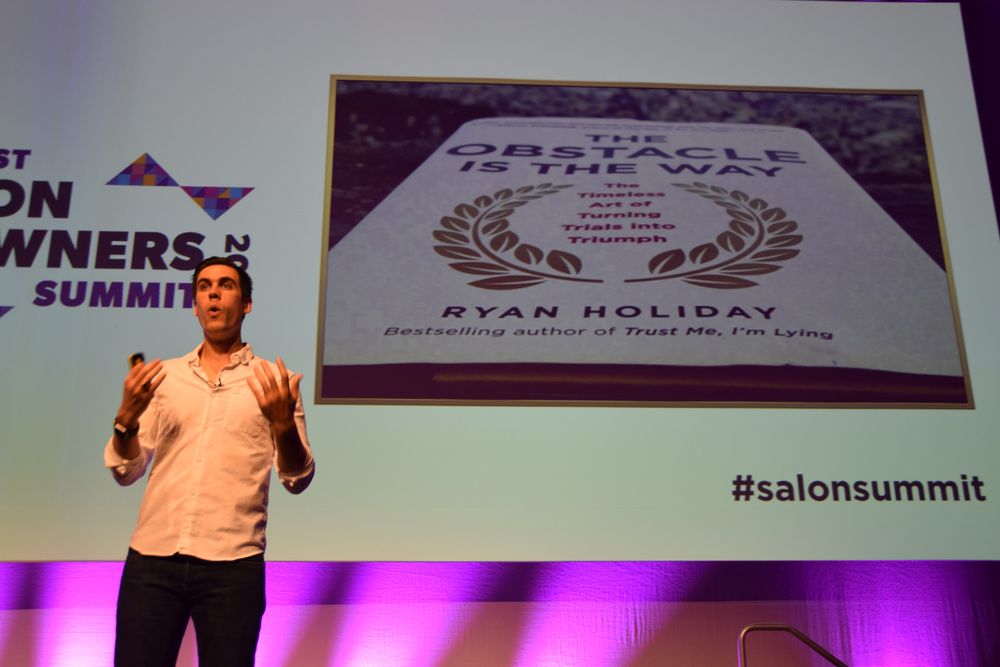 Ryan Holiday, author of The Ostacle is the Way, pulled examples from history to teach the audience about stoic optimism. 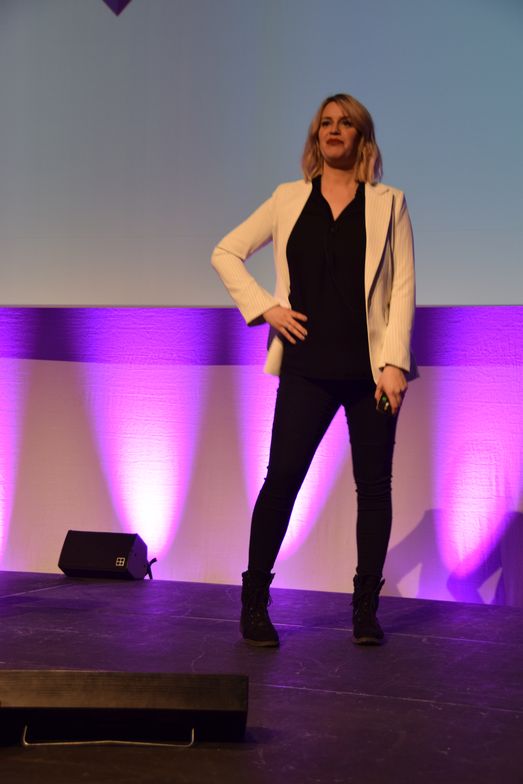 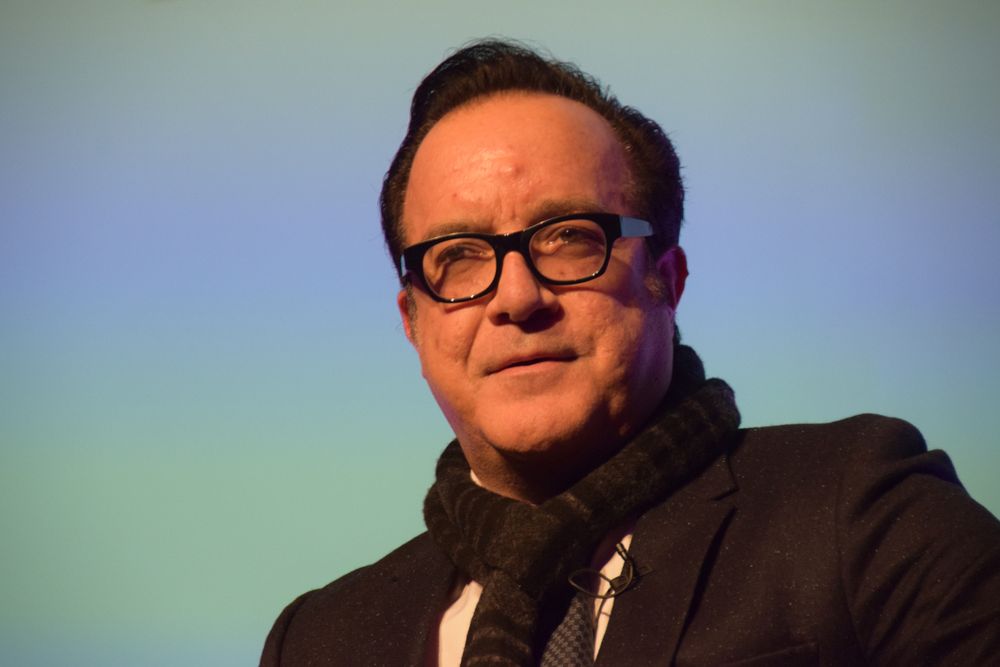 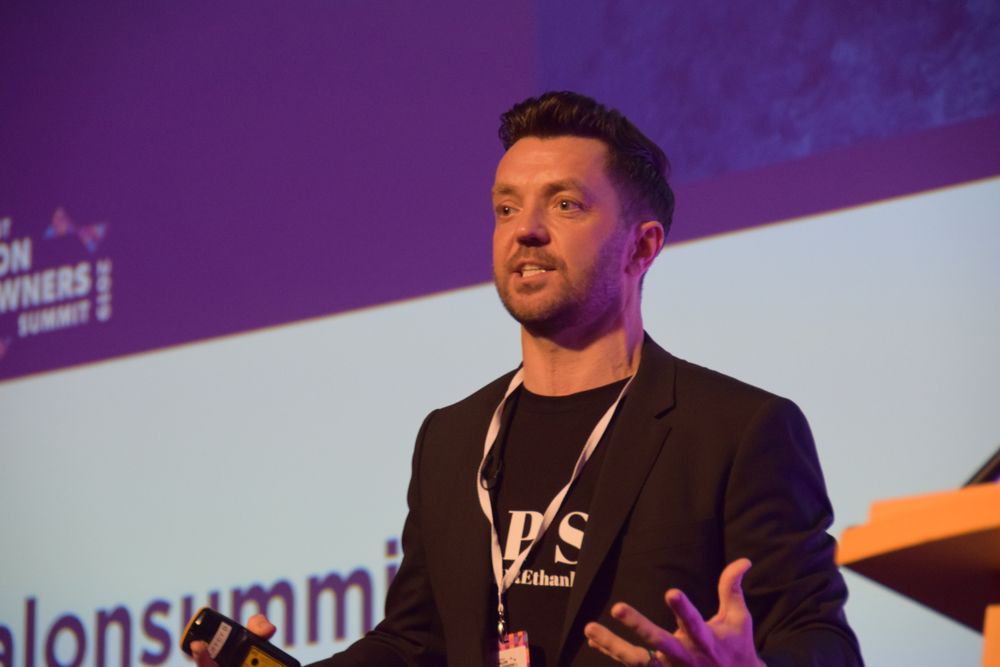 High Performance Stylist's David Barnett encourage owners to think outside the box while offering perks that would entice top stylists. 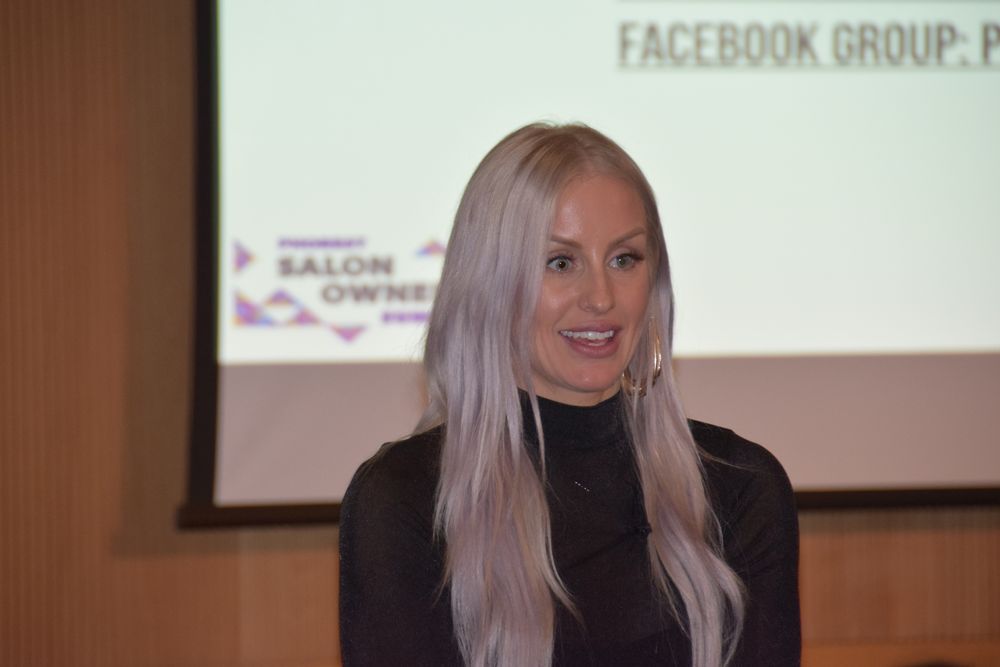 Positively Impacting People's Heather Yurko shared the wisdom of the Navy Seals in developing an elite team. "The similarities in our industries include a strong belief in serving, a belief that teamwork is an important factor in success, a pride in appearance and the fact that timing and promptness are non-negotiable." 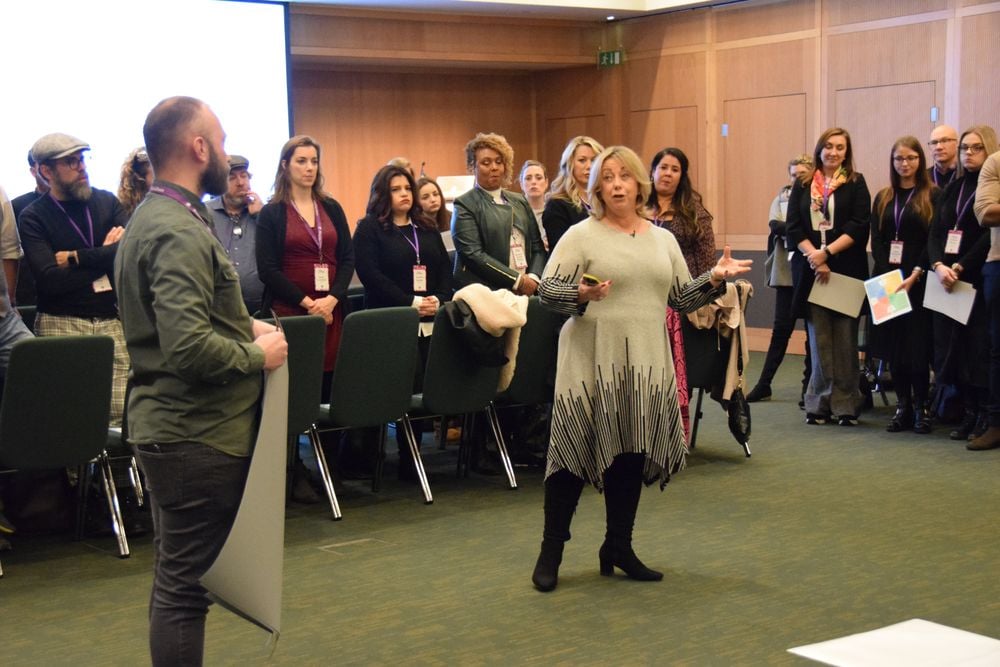 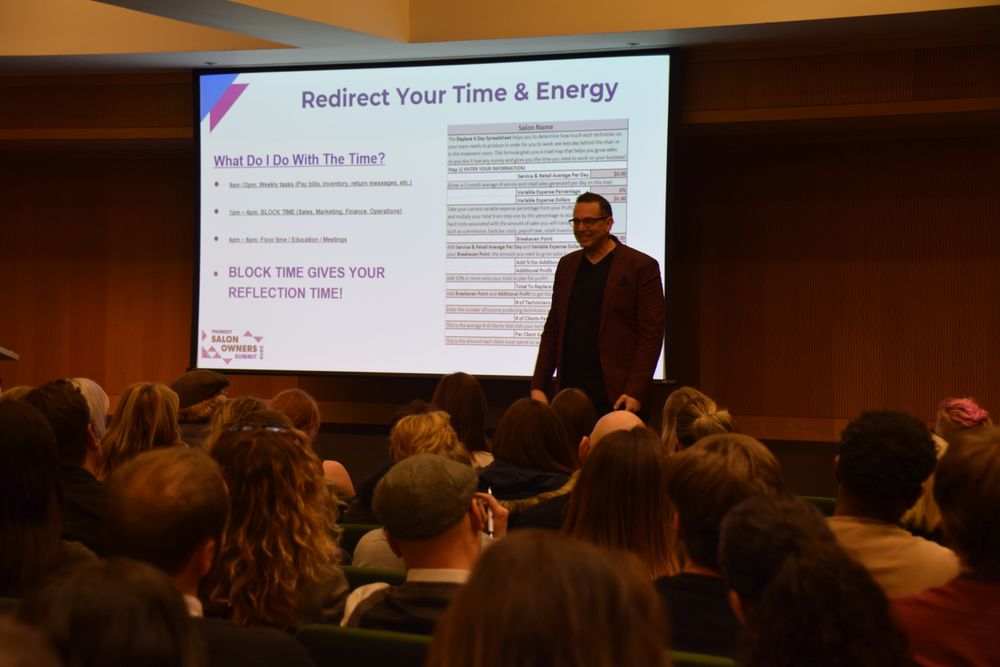 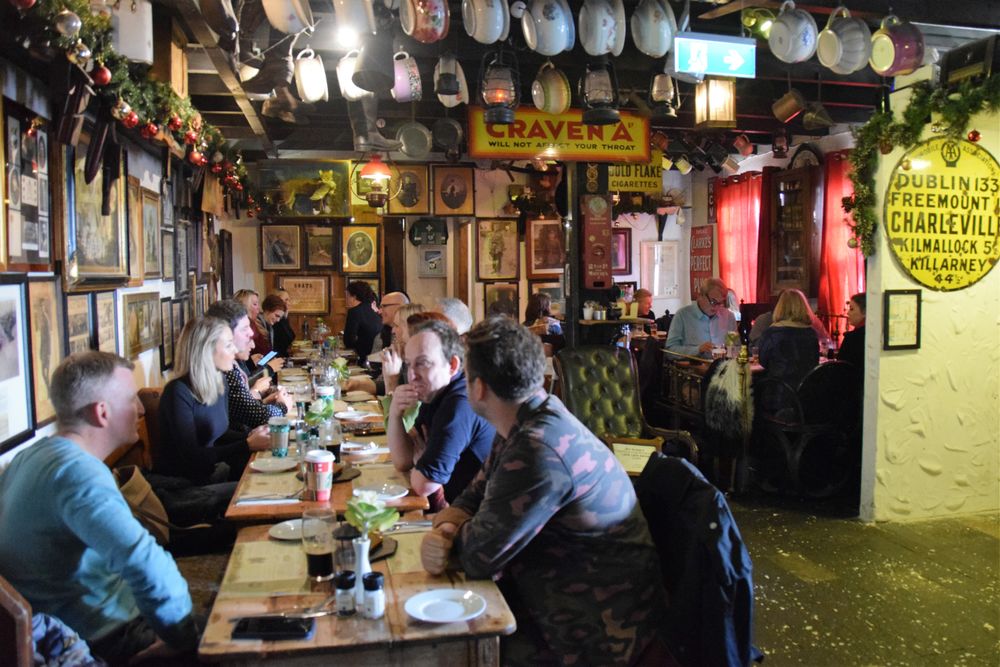 Phorest treated owners traveling from the Unites States and Australia to a few days of siteseeing, including lunch and live music at Johnny Foxes, the highest pub in Ireland. 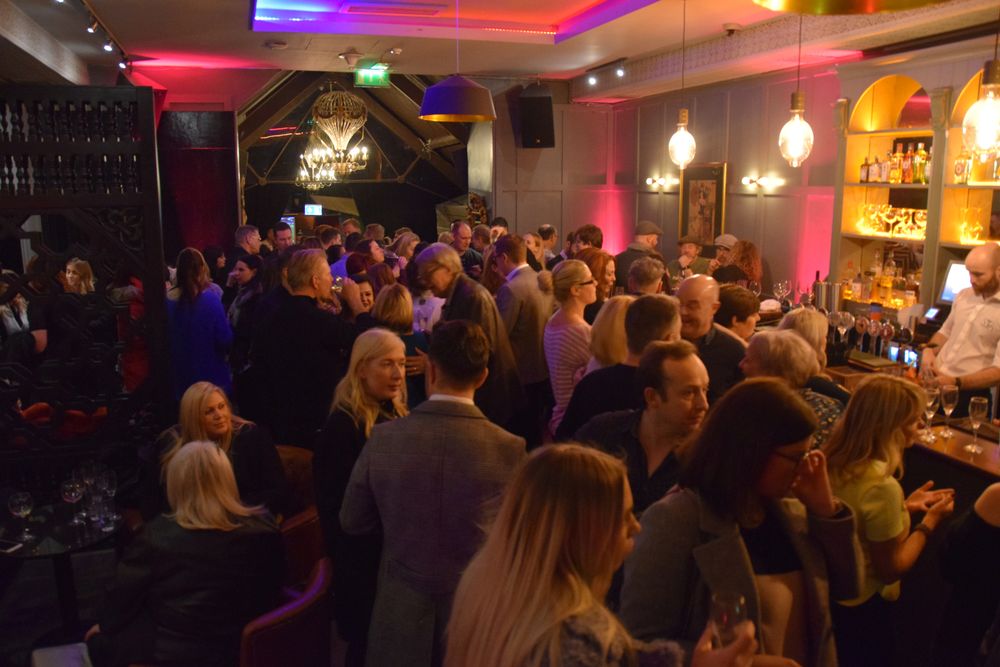 When it comes to networking with owners from around the world, a pint at the welcome reception is a positive first step. 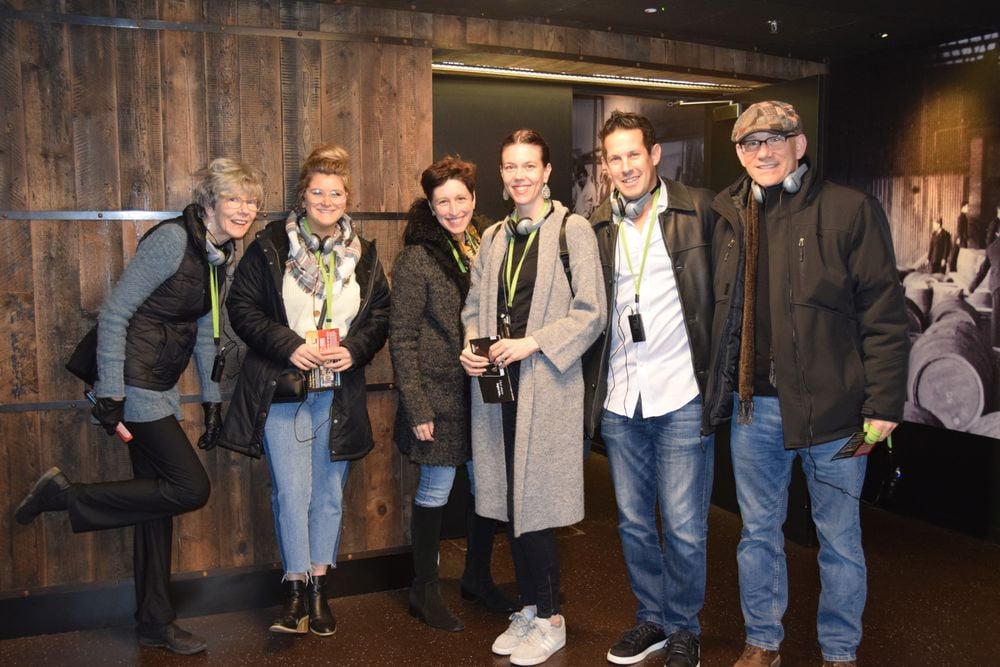 1/12
Slider
Phorest CEO Ronan Perceval welcomes approximately 600 owners to the Salon Summit, telling them the day's education was designed to help them grow their businesses in 2019.

2/12
Slider
Jo Fairley, founder of the organic chocolate company Green and Blacks, shows a picture of herself driving the company van that passed out samples. "When it comes to publicity, every square of chocolate was worth 1,000 words."

3/12
Slider
Ryan Holiday, author of The Ostacle is the Way, pulled examples from history to teach the audience about stoic optimism.

7/12
Slider
Positively Impacting People's Heather Yurko shared the wisdom of the Navy Seals in developing an elite team. "The similarities in our industries include a strong belief in serving, a belief that teamwork is an important factor in success, a pride in appearance and the fact that timing and promptness are non-negotiable."

10/12
Slider
Phorest treated owners traveling from the Unites States and Australia to a few days of siteseeing, including lunch and live music at Johnny Foxes, the highest pub in Ireland.

11/12
Slider
When it comes to networking with owners from around the world, a pint at the welcome reception is a positive first step.

Approximately 600 salon owners and managers kicked off the New Year with a powerful day of business education at the 2019 Phorest Salon Owners Summit at the Convention Centre in Dublin, Ireland, on January 7.

Before the fast-paced day of education commenced, Phorest rolled out the red carpet for about 40 fortunate salon owners who had traveled from the United States and Australia with two days of Dublin site-seeing and networking. The small group started their adventure on a private bus that carried them up into the nearby Wicklow Mountains for lunch and Irish music at Johnny Foxes, an Irish pub established in 1798 that claims to be the pub with the highest elevation in Ireland. The group kept the networking going that evening at an elegant private dinner held at the Cliff Townhouse.

The day before the conference, the traveling salon owners had their choice of a guided tour of one of city’s most popular attractions—the Guinness Storehouse—or a walking tour of Dublin. That evening the small joined hundreds of owners from Ireland and the United Kingdom at a welcome reception to kick off the conference.

The following morning, Phorest CEO Ronan Perceval set the stage by inviting the owners to play a lively game of Snowball. “Tear out a sheet of paper and write a goal for yourself for 2019,” he said before encouraging the crowd to wad up their goal into a paper snowball and throw it into the crowd. “Now, pick up a snowball off the ground. Now you have two goals—the one you wrote and the one you collected from someone else.”

The day’s first keynote speaker was Jo Fairley, the founder of the organic chocolate company Green & Blacks. She shared her personal story of creating one of the coolest food brands. “I decided to try and change the world one square of chocolate at a time,” she says. “I told myself, ‘If you don’t do it, you’ll never know what would have happened if you had.’”

Fairley walked the audience through her steps of product development, branding and design, public relations, customer service and the ethics underpinning her brand. “We sent out tons of free chocolate which fueled publicity, and we even received some support from unexpected places,” she laughed. Because the brand supported fair-trade practices by sourcing their cocoa from developing countries, it caught the notice of the Methodist Church. “We discovered vicars were ringing their grocers telling them it was their moral duty to sell our chocolate.”

Ryan Holiday, the former head of advertising for American Apparel and the author of Obstacle is the Way, took the stage next. Holiday shared a number of examples of stoic optimism from history that are outlined in his new book.

“We can’t always control what happens, but we always have control over how we respond,” he says. “Stoicism isn’t the absence of emotion, but the calming and control of emotion.”

As an example, Holiday shared how NASA astronauts use negative visualization while training for space missions. They imagine every possible scenario of what could go wrong, then rehearse how they will respond to each situation. Then when something does go wrong, they are prepared and can react more calmly. “If a leader isn’t doing this, then who is?” Holiday asked the owners.

Next, Christina Kreitel, owner of Intrepid Studio Salon in Spanish Forks, Utah, coached the audience on how to develop a personal brand that stands out on social media.

“Remember, when it comes to your audience, what matters is your community and their loyalty rather than how many followers you have,” she advised. “Don’t try to appeal to everyone with your post—if you do, you’ll end up appealing to no one. If you don’t have some haters, then you’re not doing it right.”

Kreitel shared some tips on how to take a good personal photo as well as advice for creating great posts. “Be brave enough to be just a little weird, and people will adore you,” she shared. As an example, Kreitel shared her obsession with Harry Potter in her posts, including her construction of a Harry Potter bathroom at her salon.

She offered the following tips: 1) Post more videos, videos draw followers. Be present in your videos and use your adaptive narcissism—it’s human nature to love those who love themselves. 2) The shorter the videos, the more the views. 3) Controversial goes viral.

Luxury Brand Partners’ Albie X Cortes took the stage next to discuss ‘Retail Carbon Monoxide,’ how salons can compete against the growing threat of big box stores and E-commerce. Cortes shared a series of videos from Victor Valverde, owner of Kut Haus Salon in Covina, California, which shared how he successfully launched e-commerce on his salon site after retail sales took a dip in 2016.

He offered the audience some thoughts on creative employees perks: “Consider offering a $5,000 sign-on bonus that pays out $1,000 a month for five months if they reach more than $10,000 in monthly sales. If you’re located within a city, offer team members free parking. Or, accrue your credit card points and pay for tickets for some of your top performers’ dream vacations,” he suggested. “Or loan out a company car to your top two performers—you can get a low lease on a car and put signage on it that advertises the salon at the same time.”

In addition to the mainstage presentations, the audience was broken up into smaller groups that rotated through three different breakout sessions:

Phorest’s Melanie Icke walked attendees through the DISC personality styles. Owners learned whether they tended toward Dominance, Influence, Conscientiousness or Steadiness. Icke encouraged them to consider which personalities were reflected by their different team members and how they may shape their communications with knowing an employee’s particular personality style.

After walking attendees through an exercise that helped them classify themselves, Icke suggested the exercise as an activity to do during a staff meeting. “Encourage your team to begin identifying their clients’ types and thinking how they can customize their consultation based on a client’s personality,” she said.

Stephen Gomez, owner of Stephen Gomez Salon Coaching, encouraged owners to take the time to work on their businesses by sharing a spreadsheet that outlined what they needed to do to gain a day a week where they didn’t perform services. “Time is your most important commodity,” he said.

He also coached the owners in how to build cultural capital within their team. “Get personal with goals—do you know what they are fighting for or dreaming of? Set time to plan and review—once a month find at least 30 minutes in a quiet place with no interruptions and make it about them,” he suggested. “Have your agenda and lead your team huddles and meetings, but give them assignments and have them present on various topics. And, get your team involved in delivering education that support their personal growth.”

Heather Yurko, the owner of Neatbeat Salon in Louisville, Kentucky, and the founder of Positively Impacting People shared the strategies she borrowed from the Navy Seals to develop elite performers. “Every morning they come in 30 minutes before the shift starts and we work on goal setting (setting specific retail and service upgrade goals per guest), visualizations, self-talk exercises and breathe control,” she recommends.

Chief Impact Officer and Human Potential Expert Jen Groover joins the company to double down on strategy to accelerate and empower the professional beauty industry.