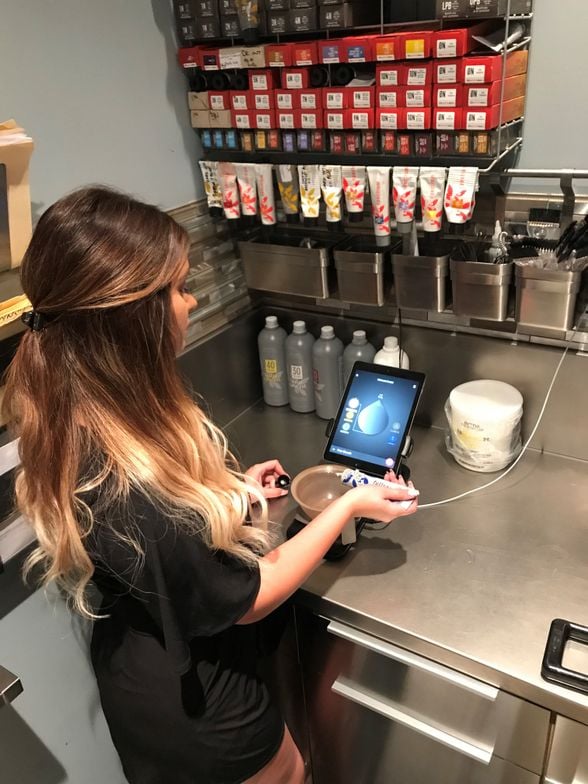 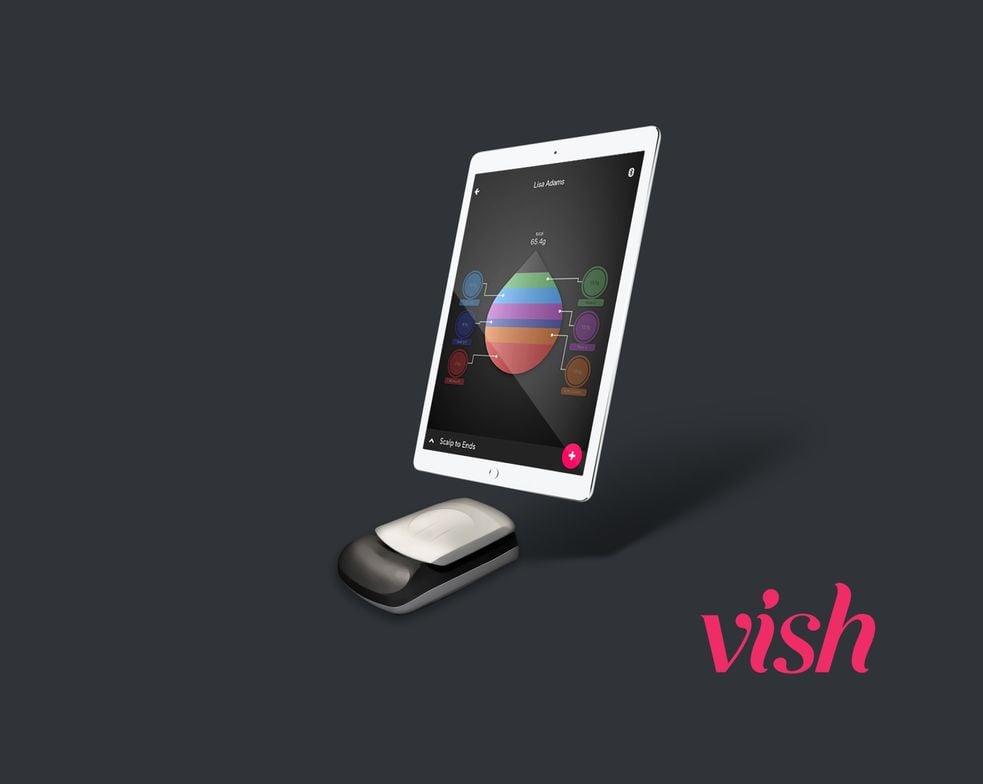 A raindrop visual helps guide colorists in their formulations. 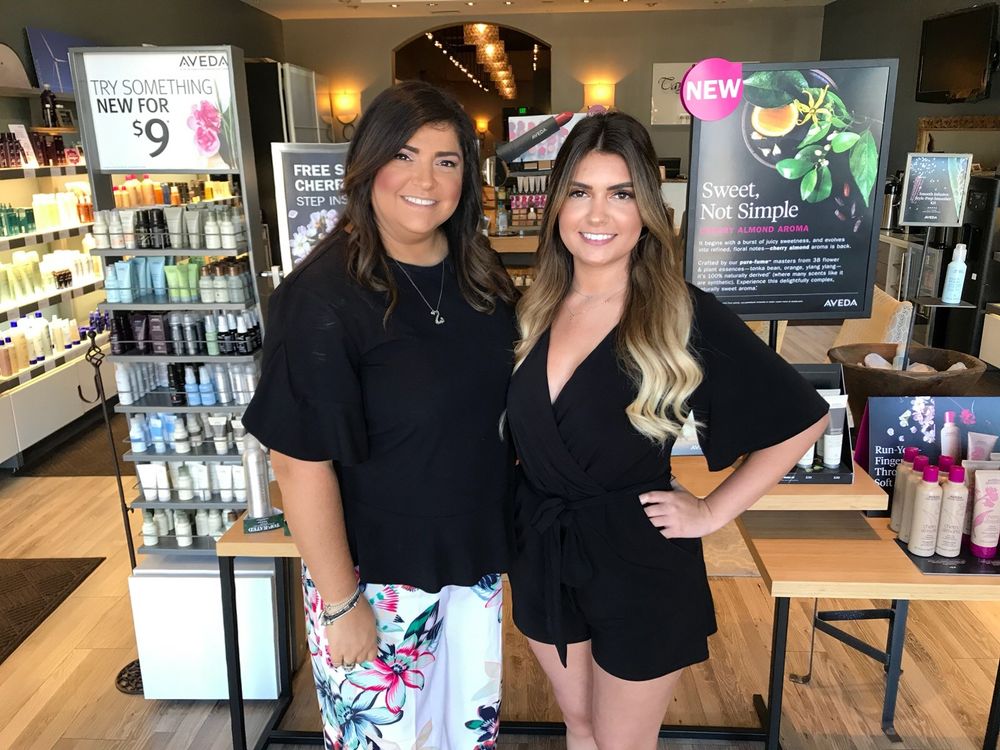 Taylor Stevens' owner Andrea Swanson with her daughter Taylor Swanson, who is a stylist and colorist at the salon. 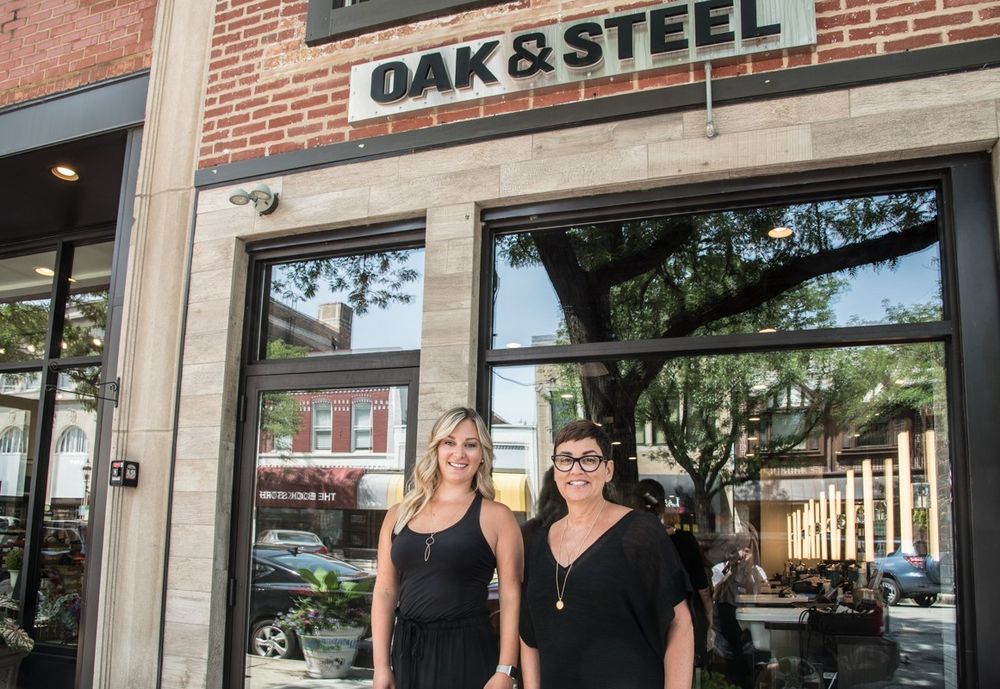 2/4
Slider
A raindrop visual helps guide colorists in their formulations.

3/4
Slider
Taylor Stevens' owner Andrea Swanson with her daughter Taylor Swanson, who is a stylist and colorist at the salon.

On a daily basis, salon owners hone their operating costs by renegotiating their credit card processing fees, installing energy-efficient appliances and lighting and buying in bulk, hoping that their efforts will help pad the bottom line. But you know your cost-savings efforts have effected some serious change when your color sales rep calls, concerned that your color purchases are down 20 percent even though your color service sales are stronger than ever.

Developed by Tim Howard, a stylist and former salon owner with more than 20 years of experience, Vish offers busy colorists a helping hand by quickly mixing formulas to their specifications, automating the recording of client formulas and notifying the front desk of color services performed.

“We love that Vish was developed by a stylist and not some software developer in a dark room who has never seen a color service before—Tim inherently understands the needs and the rhythm of a salon,” says Dana Reese, who co-owns Oak & Steel in Glen Ellyn, Illinois, with Jori Moroni.

Eliminating Waste
Chasing elusive color waste has been a long-term goal for Andrea Swanson, owner of Taylor Stevens Salon and Spa in Algonquin, Illinois. “As an environmentally focused salon, it’s important for our mission, so I was always coming up with different systems that would help us all reduce waste,” she says. “In any average salon business, the profit margin is so slim, if there is something that can help me save more than I already am, I’m interested.”

The Vish system is a Bluetooth-enabled scale that connects to a color app on a tablet that helps colorists capture and record their color formulas as they work. When a colorist is finished with a color application, she reweighs her bowl and the system automatically recalculates the formula so at a client’s subsequent visit, not only can the colorist accurately recreate the formula, but this time the system measures the exact amount needed for that particular client’s service, eliminating color waste.

“I’m a color educator and historically, we’ve been really good on waste, but Vish has helped us further reduce,” Swanson says.

“All in all, we’ve spent 22 percent less in color than the year before and our color transactions are even up from last year. Seeing a reduction in color purchases had my district sales manager calling worried if our color sales were down,” she laughs.

Accurate Records
Both Jori Moroni and Dana Reese were introduced to Vish while working at another salon, and they knew they wanted it when they opened Oak & Steel in Glen Ellyn, Illinois. Reese loves that the system automatically records all the team’s formulas. “It helps when a client wants to recreate a former formula that she loved in the past, or when one of your colorists are out and someone else needs to step in and work with her clients,” she says.

As a colorist, Moroni loves the ease in prepping the formula: “It makes formulation so much easier for people for whom math is a challenge. As you add each shade to the formula a raindrop visual on the iPad screen guides and prompts you, controlling how much you add to the formula. And should you need to make more for a reason, or you accidentally squeeze out too much of one shade, the system can recalculate and adjust your formula as you go.”

Swanson stresses that it takes time and effort to write down formulas, and in a busy salon it never happens 100 percent. “Sometimes the person entering it into the computer can’t read the handwriting or it wasn’t written down exactly,” she says. “Then, when the colorist is on vacation and someone is trying to recreate the formula, it’s frustrating.”

That accuracy really pays off for redheads, where a small alteration can make a big difference in the final result, Swanson stresses. “If the formula is not exact, it’s can turn out a little too bright or a little too copper, then clients aren’t happy—now even our clients are commenting they never have to go through a too bright period.”
Color Analytics

Having detailed color analytics on each stylist also helps Swanson be a better manager. “The analytics tell me which colorists are profitable with their color and who is not, as well as who is regularly reweighing their bowl after application and who is not. That gives me something to coach to—and coach directly to that individual rather than issuing general warnings to the entire team,” Swanson says.

“For example, if someone is asking for a raise, but the system tells me they only reweighed their bowl two out of 25 appointments, or mixing up lots of toner but not up-charging for the additional service, I can have that conversation with them, illustrating my point by showing them the data,” she says.

In addition to cost savings, Vish enhances profitability by ensuring accurate pricing—throughout a client’s service a front desk application communicates directly to the front desk, ensuring all color services are accurately captured and billed to the guest.

Intrigued Clients
When the color process is brought out into the salon at a color bar like it is at Oak & Steel, the Vish system really captures the attention of the guests. “They see the iPad and they are intrigued and immediately want to know what you are doing,” Moroni says. “We pride ourselves on being ahead of the curve, and the visual of the system helps illustrate to clients that we are professionals who take their color formulation very seriously.”
In fact, clients are so intrigued, Reese and Moroni are considering purchasing a second Vish system when they install a bar into the salon and using it to help mix cocktails.

Inventory Control
For a salon like Taylor Stevens, whose color sales average 70 percent of their total sales, Vish can be a big assist with color inventory. Vish’s web application provides perpetual inventory tracking, instantly communicating reorder quantities without the need for manual inventory counting. “Because color inventory is more accurate that will help us keep less color in stock, because we’ll always know exactly what we need and when we’ll need it,” Reese says. “Gone are the days of ripping the labels off color boxes and collecting them for inventory counts.”

Easy Training
A system with all the bells and whistles may seem a little overwhelming for a team to take on, but Swanson says the Vish system is inherently easy and her team took to it pretty quickly. “The Vish team came in for a whole day and spent time with each individual colorist making sure they were comfortable,” she says. “It was amazing how quickly they grasped it and by the second or third day, they all had it.”

“Stylists who are comfortable with technology understood it almost immediately, and for those who aren’t, it just took a little practice—it’s really helpful there are usage videos right on the iPad you can watch to refresh your memory,” adds Moroni.

To the owner concerned that their team wouldn’t readily embrace the system, Swanson stresses it’s all in how you present it. “We’ve always been a company that stays on the uptick of technology and strives to build environmentally-beneficial systems, so we told our team that we found this company that helps us meet both those goals,” she says. “But most of all, our team loves that their formulas are at their fingertips—nothing frustrates a colorist more than not having a formula recorded or recorded accurately for a guest.”

Rethinking Color
While most colorists don’t formulate haphazardly, it is human nature to mix more formula than necessary because running out during application and having to remix is both an inconvenience and an interruption to the guest. Swanson notes that even after months of her team using Vish to mix accurately, the system was down briefly for one day and she witnessed color waste creeping up.

When thinking about the salon’s bottom line, Reese concurs that Vish is a no-brainer, “The system is inexpensive to own and it pays for itself quickly.”