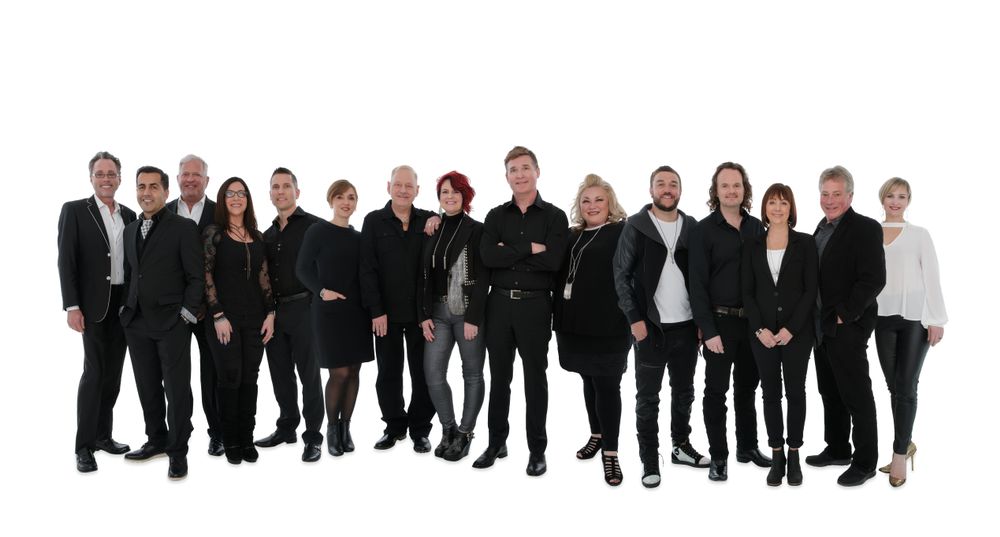 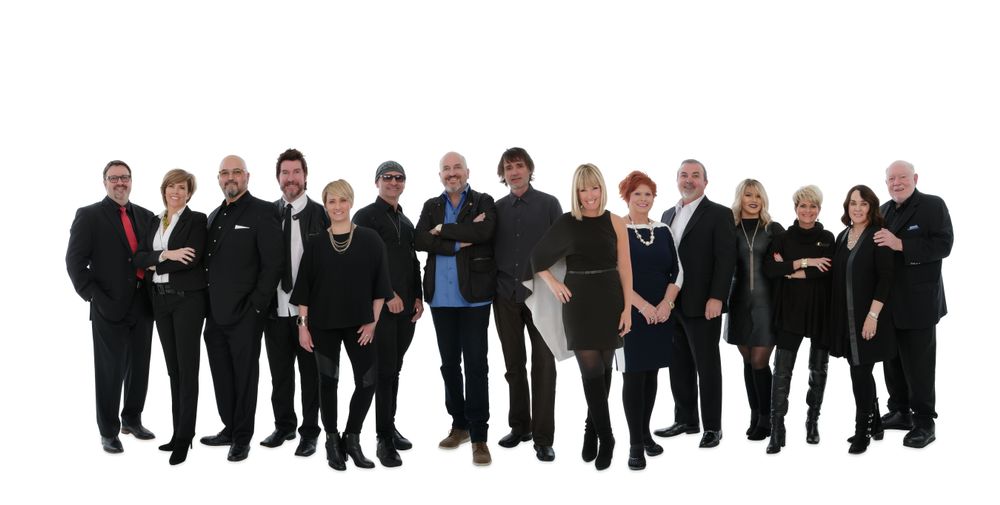 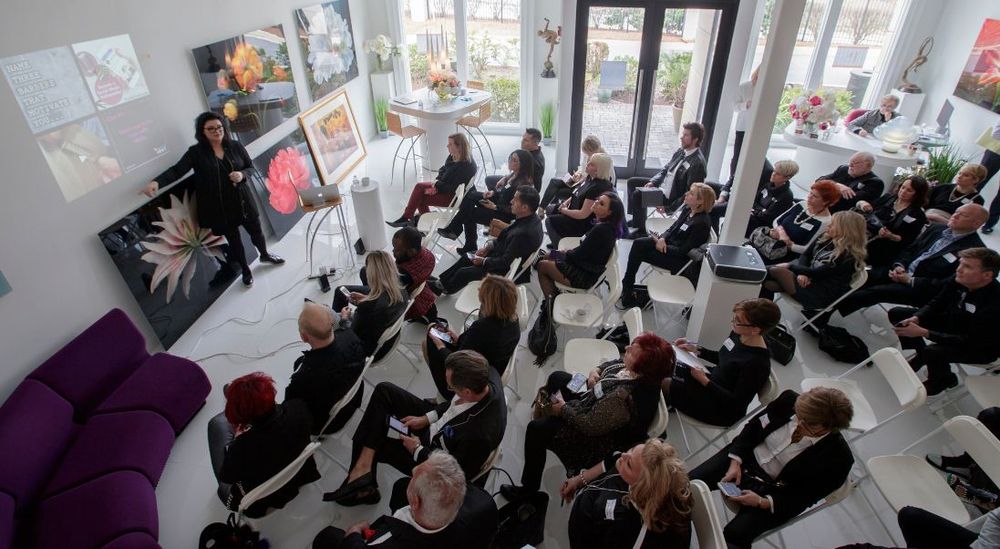 On a sunny morning in early February, about 50 salon owners and managers gathered at the Parish Kohanim Photo Studio in Atlanta to hear Kelly Ehlers of Ideas that Evoke depart sage social media advice and a flurry of digital marketing ideas.

While there was a bit of initial grumbling over coffee and pastries—after all, it was the day after the Super Bowl and the entire group had been cheering for the Atlanta Falcons—the overall ambiance was of engaged camaraderie, of old friends coming together, excited to learn new ideas.

It’s a unique environment to be sure, considering that the gathering was mostly comprised of competitors—all owners and managers of several upscale salons that are all vying for the tresses of Atlanta’s well-heeled clientele. This group though willingly sets aside the notion of competition to compare and contrast best business practices, share successful ideas and bring in speakers for the purpose of lifting up the businesses of all.

SALON TODAY participated in 2017’s first quarter meeting of the Atlanta Salon Owners Group, including Ehlers’ social media presentation and a salon owner cover shoot, both graciously sponsored by Wella Professionals. We took the opportunity to dive into the history of this unique group, explore how they help one another out and gather their recommendations for beauty communities interested in launching similar gatherings.

While the Atlanta Salon Owners Group officially launched three years ago, Candy Shaw, owner of Jamison Shaw Hairdressers, says the organization has deep roots in a 40-year friendship among her parents Jamison and Sara Shaw; her aunt and uncle Sylvia and Don Shaw, owners of DASS Salon and Spa; John and Flonnie Westbrook, owners of Elon Salon; and John and Carol Siggers, owners of Siggers Hairdressers. Back in the day, those four salons trained many stylists throughout the city.

“My father used to say, ‘I own 15 salons in Atlanta, but I only make money out of one of them,” Candy Shaw says. “Southerners are about family, and since these leaders raised their children in the salons, we have kept those relationships alive. We grew up as kids together at hair shows and have tried to carry on the legacy.”

Thirteen years ago, a devastating event further solidified the group. A talented colorist Donielle Shaw (Candy Shaw’s cousin and Don and Sylvia Shaw’s daughter) lost her battle with melanoma. In an effort to raise money and bring the beauty community together to heighten awareness, Don and Sylvia created an Atlanta group called ‘The Top 10 Salon,s’ and hosted a number of runway shows to raise money for their charity, “You Can Make A Difference.” The group even participated in an ad campaign together.

“While the group didn’t continue to meet, its members remained friends and have been fondly referred to as Atlanta’s Hair Mafia ever since,” says Candy Shaw.

A little more than three years ago, Candy Shaw was inspired by the salon data presented in the Salon Today 200, and she set out to gather information and data about salons in the Atlanta area. “I wanted to know more about the issues other owners struggle with from compensation to staff education and how the industry’s shift toward booth rental is impacting staff retention for independent salons,” she says. “So I made up a questionnaire and sent it to all my local salon owner friends, telling them if they would fill it out, I’d compile the information in chart form and share it with the group.”

The group met in Shaw’s living room to discuss candidly the results of the survey, and they decided they wanted to keep the conversation alive by meeting 3-4 times per year.

“Knowledge is power and we all knew that if we could avoid having issues with employment we would be greater as a collective force,” Shaw says. “We don't have an association president, secretary, bylaws or dues....we just have trust and loyalty toward one another.”

But they do have an unwritten code of honor. For instance, if a job candidate applies to one of the group’s salons and that owner learns the person previously worked for one of the group’s other salons, the owner picks up the phone and asks for the other’s blessing before making an offer to the candidate.

“Another unspoken rule is if any of us needs anything, we can always call another member to ask for help, advice or even just a lunch date to blow off steam or talk about business.”

“Over the years as your salon grows, the challenges you face change too, but there are people in this group who have faced that challenge and everyone shares their issues and ideas,” says Joseph Golshani, owner of Joseph and Friends.

“It’s fantastic to be around like-minded salon owners,” says Jason Craven, co-owner of Jyl Craven Hair Design. “We have similar issues but the ability to network helps you see things in a way you haven’t before.”

Through a stronger networking relationship, members call on each other for all kinds of advice, from thoughts on salon software to insurance providers to advice on tackling a specific management problem.

“The group itself is a great source and we’ve shared information on our credit card processing, our phone providers, IT experts—members of the group are so free with their knowledge,” says Lee Ann Herbert, Lotus Salon.

“The group is a great professional tapestry of the beauty industry—we give to each other and grow together,” adds Jackie Yates, owner of the Jackie Yates Salon.

While Shaw continues to manage the email list and the invitations to each event, now a different salon owner volunteers to find a speaker for and host the next meeting. Meetings are held once a quarter and average about two hours, and it’s usually BYOC (Bring Your Own Coffee).

“We’ve had some unbelievable speakers, including the managing partner of Elarbee, Thompson, Sapp & Wilson, who spoke on employment law and non-compete covenants; Neil Ducoff from Strategies who spoke about leadership and no-compromise management; Leon Alexander of Eurisko who described the psychology behind successful retail environments and work spaces; and Steve Reiss of Modern Salon Media who shared analytics on independent artists and salon suites versus salon ownership, and many more,” Shaw says. “Speakers are not brand-specific, even if they have their own brands or work for one—it’s really about sharing industry knowledge and best business practices.”

The group itself continues to grow as member salons invite additional Atlanta salons to join, and today there are 23 member salons. “We originally met at people’s houses but as we grew, we needed a small hotel meeting space,” Shaw explains. “The host of each meeting pays for the room rental and picks up the flight and lodging of the speaker if needed. Surprisingly, all of our speakers have done it for no fees because they love the concept of getting to speak to such a powerhouse audience and love the fact that we are one of the first of its kind—a city of successful salons that have broken down the competitive walls and share openly. And sometimes we’ve found manufacturers willing to sponsor the costs of bringing in a speaker.”

“I find that any time I attend one of these meetings, there’s always one key takeaway that really makes a difference in my business,” says Amanda Hair, owner of Bob Steele Salons.

As the group grows and develops, it also has fueled other mutually beneficial opportunities, such as educational benefits that extend to each salon’s stylists. “For example, last year I brought in Sonya Dove and Aubrey Loots from Wella for a color and styling class. We sold tickets to cover the cost and pay the educators and 80 percent of the audience were staff members from the Atlanta Salon Owners Group.”

“We are always looking to collaborate on things that are educationally worthy for our businesses,” Shaw continues. “For instance, Intrigue Salon’s Jeff South created a fabulous forum called Club Intrigue. He has educators come and teach free-of-charge on a Monday evening, and it’s open to all stylists—now he’s taking that show throughout America. It’s a two-hour jam session of stylists teaching stylists.”

“I like being part of something where everyone grows together,” adds South. “It’s not about what you have, it’s who you can share it with.”

The Atlanta Salon Owners Group also is becoming its own network for young stylists seeking employment. “Today, with all of the different training programs, cultures, decors and personalities, salons are more different than ever before,” Shaw says. “Many of us have been known to pick up the phone and call a salon to help a beauty school graduate or transplant find a home should they not be a perfect fit for our own culture.

“We owe it to our industry to upgrade and elevate our craft and help each other succeed,” Shaw says. “I have a saying that I tell every new hire. ‘Creativity does not breed in a negative environment. There are many different ways to cut or color hair, the secret is finding the right salon family to do it with. Fortunately, Atlanta is full of great hair homes and forward-thinking owners.”