With a healthy clientele and a happy staff, Bobby Cooper Salon in Indianapolis receives a lot of positive word-of-mouth marketing. Throw in a healthy dose of social media, and co-owner Sarah Cooper says it’s their happy guests who are their best marketing tools. Creating a Unique Environment

But to get clients talking, you must first have stellar customer service and a positive salon environment. At Bobby Cooper, this begins during the interview process.

“A few years ago, we started to turn the interview around to the candidates,” Sarah says. “If we like them, we ask what they could contribute to the team. We’re only as good as the effort each one of us put into it, so that’s important to us.”

The apprenticeship program is a minimum of one year but can be two to three years. Sarah says apprentices do not graduate anyone until they are 100% ready.

“They must understand how every department works from the front desk to the back room to cleaning,” Sarah says. “This is where they establish good habits for their career. If they walk out from behind the front desk and help open a door, a client will remember that. That’s why we require they work the front desk the first three months. They learn the clients, pricing, timing, etc.”

The salon’s senior staff sets an example for newbies while Sarah makes sure everyone is on an upward trend at all times.

“If anyone plateaus or goes down, we sit down and have a talk,” she says. “We address those things as people who care. If they’ve become a bad fit, we part ways.”

Quarterly meetings with Sarah and regular check-ins with a manager help keep everyone on track.

Stylists at Bobby Cooper put in hard work and attention to detail at the salon every day. So Sarah and Bobby have found a unique way to reward them for their dedication. The Bobby Cooper Salon Team Day has become an annual event the entire team eagerly anticipates.

“We do it at end of August right before back-to-school and the holidays,” Sarah says. “It’s a lagging time, and it reconnects people at the exact right moment.”

Before the big day, a lot of prep must be done. In March, Sarah requests each stylist send her four locations around Indianapolis. 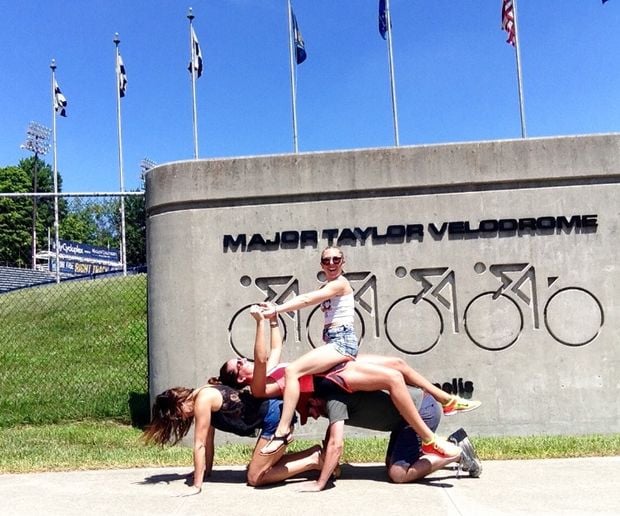 “Because I’m involved, I have a third party randomly pull names of people (including owners) to create four or five groups—never more than five people per group,” she says. “The third party then puts the locations in a separate envelope.”

On the day of the event, the staff splits up into their teams. They’re then given the envelope with their locations and $25. The teams then have two and a half hours to go to all four locations and take a group photo. You must be able to visibly identify where the team is, and extra points are given for posing creativity.

“Some examples include people getting into plank poses, forming a human pyramid or jumping in a fountain,” Sarah says.

Next, the teams must get their photos developed and then go buy costumes (with the $25) for a lip sync contest. “As artists, they get pretty creative with their costumes on a budget,” Sarah says.

When the time is up, they gather at Sarah’s house to have guest judges evaluate the photos and judge the lip sync battle.

“We also have games and a barbecue/pool party,” she says. “Families and spouses can come and it becomes a day to reconnect without stress.”

The salon’s holiday party is another opportunity for the team to unwind. They get into teams at a dinner and play Bobby Cooper Salon trivia. “We collect inside jokes, funny things clients did or embarrassing moments from the year and make it into a trivia contest,” Sarah says. “The winning team gets 10 lottery tickets each.”

These events, and the salon culture in general, teach stylists to use work as a reprieve from their real lives.

“We’re blessed to work in a social environment and be surrounded by clients who love us,” Sarah says. “If you focus on why you’re here, you’ll be successful.”