Terry McKee is a self-professed techie. A few months before the Apple Watch debuted, McKee, who with James Amato owns Nuovo Salon Group in the Sarasota, Florida, region, gave himself a lecture. “I said, ‘Terry, you’re going to put your instant gratification syndrome on the back burner and be a fast follower on the watch trend instead of an early adopter,’—but I found myself wide awake first thing on the day you could first place an order, and had purchased the Watch by 3:14 a.m.”

As a result, McKee was one of the lucky consumers who received an Apple Watch from the first April 24th ship date. “I had an appointment at the Apple store to have them help set it up for later that week, but I’d done some reading online and decided to set it up myself and start using it,” he remembers. “The very next day, I was on a flight for Chicago for the 2 to 10 conference and my boarding passes were popping up on the watch. All the airport attendants were going crazy over it, as I tipped my wrist and scanned my boarding passes.”

Since then, McKee has discovered great applications for the Apple Watch in the management of his four locations. When he’s working behind the chair, he receives notifications on the watch when guests arrive through his SalonBiz app—making it easy to keep track of the next guest without disturbing the one in the chair.

“What I didn’t realize was how great the voice activation would be on the AppleWatch and how useful that would be,” he says. “As great ideas pop in and out of my head, I simply point the watch to my face and say, ‘Hey Siri, remind me to set up a call for the Wine, Women and Shoes gala, or call my distributor about that last order, or make some time to finalize the new pricing/level matrix for haircuts.’ As an owner if you jot something down on a piece of paper it easily gets swept away in the tide—now those reminders are attached to you.” 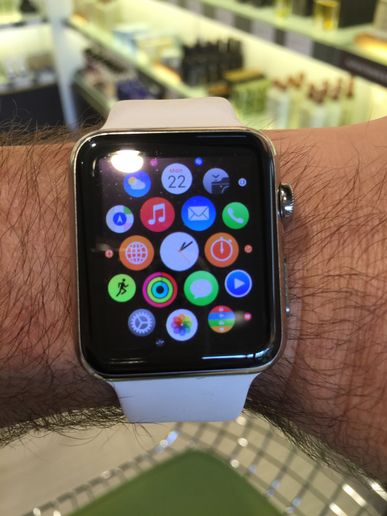 McKee also has discovered with the improved voice activation capabilities of the watch, it’s much easier to send voice messages to team members via iMessage. “I haven’t yet tried a group voice message, but wouldn’t that be great—to be able to send a group message to all managers at once?” he says. “I need to find a teenager who can help me figure that one out.”

For now, McKee is looking forward to a myriad of ways the watch can aid in salon management. Since Nuovo recently converted to Apple computers and worked closely with the Apple business team, he already signed up for the one-on-one classes through Sarasota’s new Apple store. “I’m looking forward to some coaching with the watch,” he says. “When you get paired with the right Genius at the Apple store, it’s amazing how they can help you work more efficiently with tools that already are at your fingertips.”