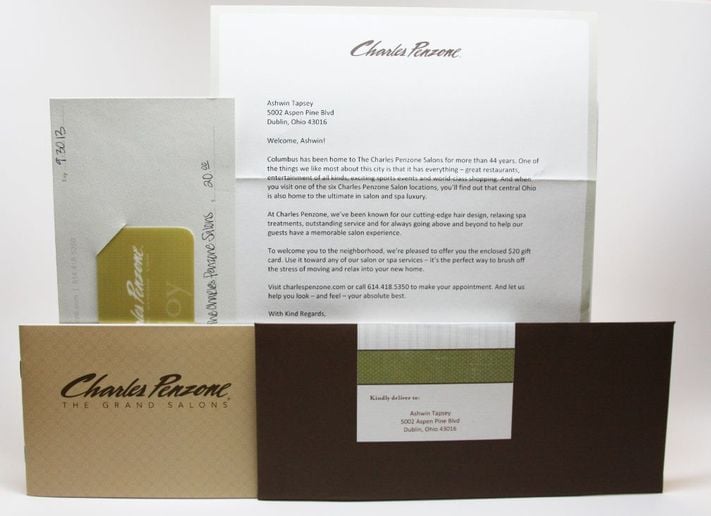 Although it had been several years since The Charles Penzone Salons had produced a direct mail piece, in 2013 it piloted a piece aimed at residents who had recently moved to the Columbus community. Taking a cost-effective approach, the Charles Penzone team drafted a personalized mailer resembling an invitation with the salon’s standard chocolate envelope and brand-patterned custom label. Inside, a letter written by Debra Penzone personally welcomed the recipient to the neighborhood and informed her of the salon’s history in the community, its capabilities and the professionalism of the team. As an incentive, the piece included a $20 promotional gift card and a recommendation of two of the closest Charles Penzone salons to the recipient’s new residence.

“Through a local list provider, we purchased a list of all new movers within a 10-mile radius of each of our six locations,” Debra Penzone says. “We indicated specific household income and household value to target our list.” To keep costs at a minimum, the salon printed and fulfilled the mailers in-house. A total of 1,600 mailers were distributed for a total cost of $3,200. “During the three-month redemption period, 14 percent of the cards were redeemed by new guests—considering industry redemption averages are about 2.5 percent, we were thrilled,” Penzone reports. “Nearly 30 percent of these new guests came back for repeat visits, some of them up to 10 times over the next six months.”