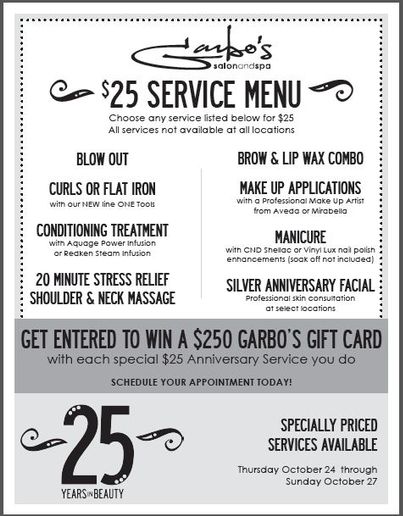 To celebrate its 25th anniversary, Garbo’s Salons and Spas employed a number of marketing elements during a campaign that ran for a week in October, and all materials were printed in black and silver and centered on the number 25. For example, the team developed a $25 service menu, which was supported by radio and newspaper ads and in-salon print materials. For every $25 service a guest tried, she received a chance to win a $250 gift card.

The salon also developed a scavenger hunt with a punch card—for each Garbo’s location visited, the guest received a punch and a bag full of promotional items. Completed cards could be entered for a drawing for $500.

“We were surprised at how many people participated—about 500 started, with more than 250 completing the hunt,” says Roxanne Kahn.