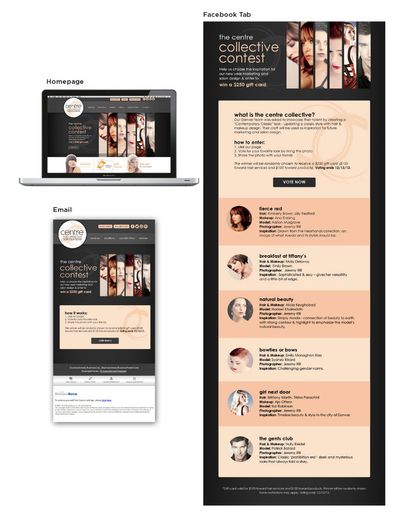 To drive more attention to the salon’s Facebook pages and reach potential new guests, style teams in Centre’s seven locations put together different looks for a professional photoshoot—the resulting look book being visual proof of the team’s level of skill and versatility. The salon developed a Facebook photo contest that would generate buzz about the salon and its stylists by featuring photos from the shoot. People were asked to vote for their favorite look as the central image of the salon’s upcoming marketing campaign, first by liking the page, then liking their favorite image. To promote the competition, Imaginal Marketing helped Centre Salon update its website with promotional artwork and develop Facebook posts.

“The campaign generated more than 500 new Facebook fans and 33 new clients, and while we were happy with those results, what happened later amazed us,” Pacifico says. “After the contest ended, the salon noticed an incredible increase in referrals resulting in a 200-400 percent uptick in new clients at some of our locations.”