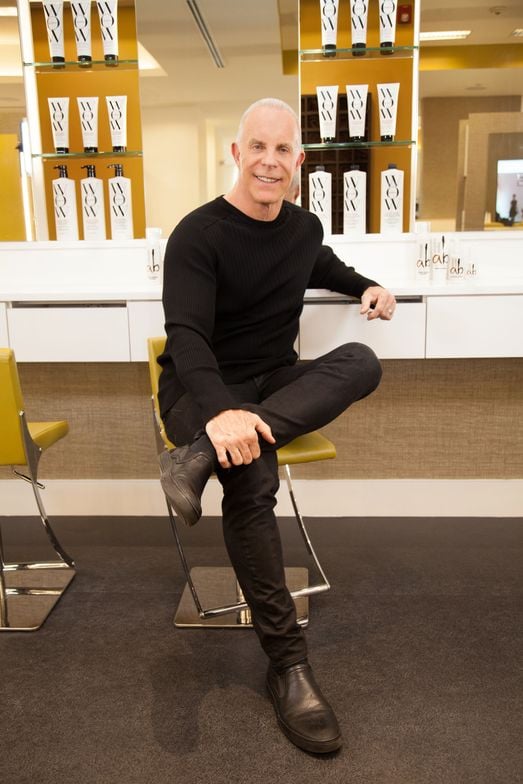 Adam Broderick seated at his new AB Style Bar at his location in Southbury, Connecticut. 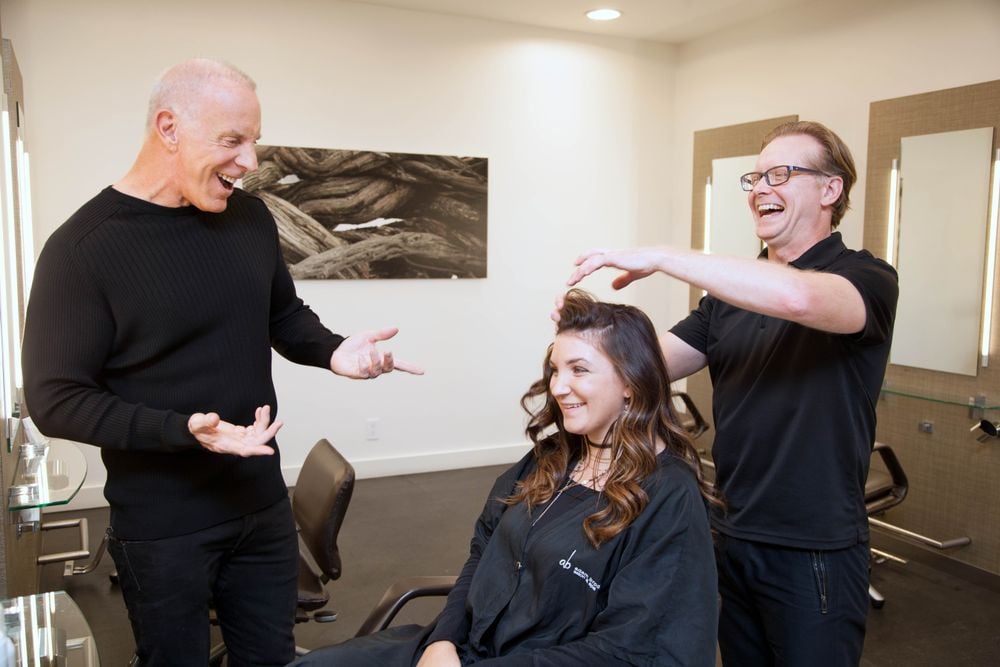 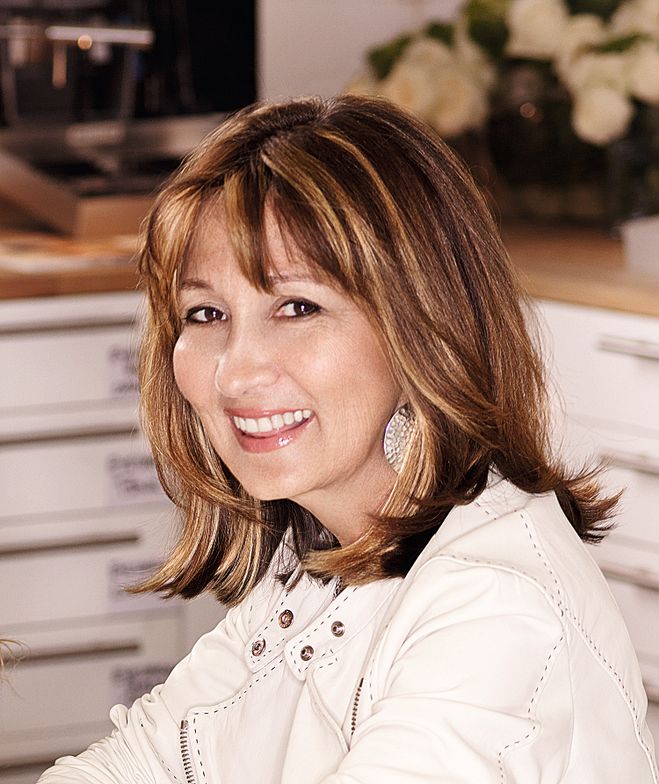 "Instead of placing the products on the station in front of the client, Adam tells his team to put it in their hands, encouraging clients to smell and feel the products as the stylist are using them and talking about them," Gail Federici, founder of Color Wow.
1/3
View all

1/3
Slider
Adam Broderick seated at his new AB Style Bar at his location in Southbury, Connecticut.

3/3
Slider
"Instead of placing the products on the station in front of the client, Adam tells his team to put it in their hands, encouraging clients to smell and feel the products as the stylist are using them and talking about them," Gail Federici, founder of Color Wow.

Proximity played a significant role in the partnership between Adam Broderick Salon and Spa, with locations in Ridgefield and Southbury, Connecticut, and Color Wow, the relatively young hair care brand by Federici Brands, located in the next town over.

Although the brand was just getting its start a few years ago, the company’s founder, Gail Federici, has a decades-long history in professional beauty. As a self-described consumer-obsessed, renegade thinker, Federici partnered with British stylist John Freida in 1989, launching first the Sheer Blonde line, followed by Frizz-Ease, to address the unique needs of clients with frizzy or blond hair. The pioneering duo sold the brand to the KAO Corporation in 2002, but Federici recently found herself back in the hair care arena as she championed an easy-to-apply root coverup that both lasted until the next shampoo and didn’t smudge off on client’s clothing or pillowcases.

Knowing that Broderick was not only a market leader in their region but also recognized nationally as top salon owner, his was one of the first doors Federici and her Color Wow president, Shelley Waln, knocked on.

“At first, I wasn’t all that interested because I already was carrying a few root touch-up sprays in my retail,” Broderick says. “But the quality of the product was excellent, the packaging looked like a fine cosmetic, I was impressed that the product could even cover dark roots in lightened hair, and they had produced a video that really educated the consumer how to use the product, which can be the biggest hurdle in product adoption. Eventually, I decided to take on the brand, incorporated the video in our digital signage, and the product flew off the shelves.”

When Federici and Waln came back around to talk to Broderick about the Color Wow hair care line, he was a tough sell again.

“I really liked working with them with the root touchup, but I needed another wet line like I needed a hole in the head,” says Broderick, who carries a number of prestigious professional beauty brands. “But then I started studying their price point, which was relatively low compared to the other lines I carry, and I started to think about how that could play out in another venture I was contemplating.”

Broderick had been closely monitoring the emergence of blowdry bars as well as the entire service-bar concept.

“Personally, I’m not convinced that as independent blowdry bars hit critical mass they’ll remain sustainable, but on the other hand, we’ve been in the blowdry business forever,” he says. “Reverse engineering it and creating a business within a business by implementing a blowdry bar in an existing location would give us permission to be in the dry bar category.”

As his second location in Southbury approached its 10-year anniversary, the timing was right for a decor refresh. The location already boasted a successful nail bar, and Broderick decided to implement an AB Style Bar as well.

“The whole blowdry service is a funny concept,” Broderick says. “Some clients don’t feel like they have permission to walk into a salon unless it’s one they already patronize, but the same client will visit a blowdry bar and not feel like they’re cheating on their stylist. While our Southbury location is still affluent, it’s a little more price-sensitive than our flagship location, and I thought a style bar with services at lower price points would attract a whole new population of clients.”

A blowdry service at a typical station at Broderick’s salons runs $55, but a blowdry at newly launched AB Style Bar is a very different service. The Wow Blowdry, which will be the bar’s signature service, starts at $35 and includes a shampoo, application of a Color Wow thermal cocktail, a blowdry and styling with a natural bristle brush, and the demonstration and application of the Color Wow root touchup.

To keep prices lower, only Color Wow or Broderick’s AB private label line products are available at the bar, and clients can’t request specific stylists, but rather will be paired with a stylist who is working the dry bar when they come in. Although all stylists are being trained to perform the AB Style Bar services, Broderick foresees the bar primarily being staffed by newer stylists who are working on increasing their productivity and are building up their clienteles.

Although Broderick admits he is a little concerned that carrying the new line will cannibalize some of his existing retail sales of brands with higher price points, he’s willing to hedge his bets that this loss will be overcome by drawing in a wider range of new clients.

When Broderick started sharing his idea of the AB Style Bar with Federici and Waln, they collaborated—writing protocols, developing the language for the menu, which is painted directly on the wall behind the Style Bar, and developing the pricing and the promotional offers. For a limited time, Broderick will offer $5 of the $35 service price as a credit that can be applied to product purchases.

In the past few months, stylists have been training with the Color Wow team, learning how to pair a client’s unique needs with the corresponding cocktails, which were designed to give color-treated hair a bond-building boost. For example, Color Wow’s moisturizing coconut cocktail bonds a new lubricating layer to the hair’s surface, the kale cocktail reinforces internal bonds and strengthens hair, while the carb cocktail fattens fine, limp strands to give hair more body and stamina.

“When it comes to developing and launching products, I’ve always come at it by studying the specific needs that today’s consumers have, especially the needs that currently aren’t being met by other products,” Federici says, whose own frizzy hair needs led to the development of Frizz-Ease. “I’m committed to cracking problems, and every problem has a solution.”

Throughout the product education classes with Broderick’s team, Federici acknowledges that the learning process was sometimes a two-way street.

“Because we’re physically close to Adam’s salons, we book some of our own services there, and we’ll listen to how the stylists talk about the products and mix thermal cocktails,” Federici says. “And when we held the classes, it was really eye-opening how Adam instructed his stylists to educate the clients. Instead of placing the products on the station in front of the client, he tells his team to put it in their hands, encouraging clients to smell and feel the products as the stylists are using them and talking about them. We’re incorporating that suggestion into future product classes.”

As they prepare for the grand opening of the AB Style Bar, Broderick and the team from Color Wow are eager to realize its success.

“I measure absolutely everything, and if it’s successful in helping us attract a new client population and expand sales, I’m committed to sharing the idea with other salon owners,” Broderick says.

In the meantime, Broderick believes having a partner in the concept has kept him on his toes. “I find myself really wanting to do a good job for them.”