Over the course of their careers, Arik Efros and his wife Eva Scrivo have opened five salons in New York City. As CEO and co-owner of Eva Scrivo Salons, Efros has negotiated leases, worked closely with contractors and navigated the nuances of a buildout.

The couple recently opened a 5,000-square-foot new salon and completed the buildout process in three months, including the move from their existing location. Efros, who shares. In the following blog, Efros shares five of the important lessons he’s learned to help other new owners avoid the frustrations and the expense of a costly mistake:

Be a Shrewd Negotiator: Before signing the lease on your future space, educate yourself about commercial leases and hire an experienced real estate attorney. Many new owners get so excited about a space and at the prospect of having their own salon, that they sign too quickly and often pay dearly for it down the road. There are numerous elements of a lease besides the rent and duration of the term that require attention and can be typically negotiated. Especially in crazy real estate markets like New York or San Francisco, missing an important term such as the “demo-clause,” where the landlord has the right to terminate your lease if he or she decides to demolish or completely gut the building, can destroy your business down the road.

Expect the Unexpected: Prepare to spend twice as much than your budget for the salon construction, and for it to take twice as long as expected (and that’s in a good case scenario). If you’re not experienced with construction, there’s a steep learning curve where you will quickly be exposed to many hard and expensive lessons. Even real estate pros typically underestimate the cost and time involved in a construction project. Not to mention the emotional toll it will temporarily take on your life. Between unscrupulous contractors, building codes, and hidden surprises within every building, you may be in for the ride of your life before taking a single client at your new salon! So be prepared – construction is not for the faint of heart. Expect the unexpected, don’t announce your opening date upon signing the lease, and have a reserve source of funds you can dip into when you run over budget. 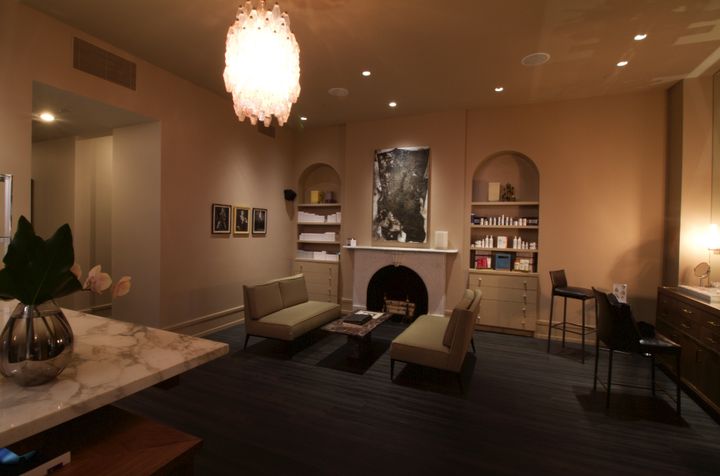 A look into the newest Eva Scrivo Salon.

Play Your Part: Take an active role in the construction and don’t rely on your General Contractor (GC) to do the right thing. Maybe you’ll be the lucky one but I’ve never known anyone who has been. If you expect to take a back seat in this process and continue to just do hair as before, then God be with you! Even if you don’t understand construction, your mere presence and participation will help to keep the GC in line and on schedule.

Grasp the Salon Difference: Understand the three key elements of salon construction that if not done correctly can literally ruin your business – plumbing, electrical and HVAC. When it comes to these factors, particularly the first two, salons have their own unique requirements that many contractors do not understand. For example, something as simple as not having the electrical outlets for your blowdryers on dedicated breakers can make your life absolutely miserable when you open for business and the breakers start constantly tripping while you’re trying to blow dry hair.  Likewise, not having your plumbing properly vented or your waste lines pitched can lead to your shampoo sinks continually backing up and/or emitting foul odors. Getting these things corrected after the fact, when all of the walls, ceilings and floors have been closed, can be extremely expensive and disruptive to your business. Believe me – we’ve been there!

Balance Form with Function. Hairstylists are artistic and creative people who understandably want everything to look beautiful. But it’s at least as important for it to also function properly. Think that a white marble floor will look great? Maybe it would but only for a couple weeks at a salon since marble absorbs hair color. Not to mention that a hard surface like that can wreak havoc on your knees and back over time. But if you have your heart set on a natural stone surface – whether for a floor or the counter of your color bar – try granite instead.