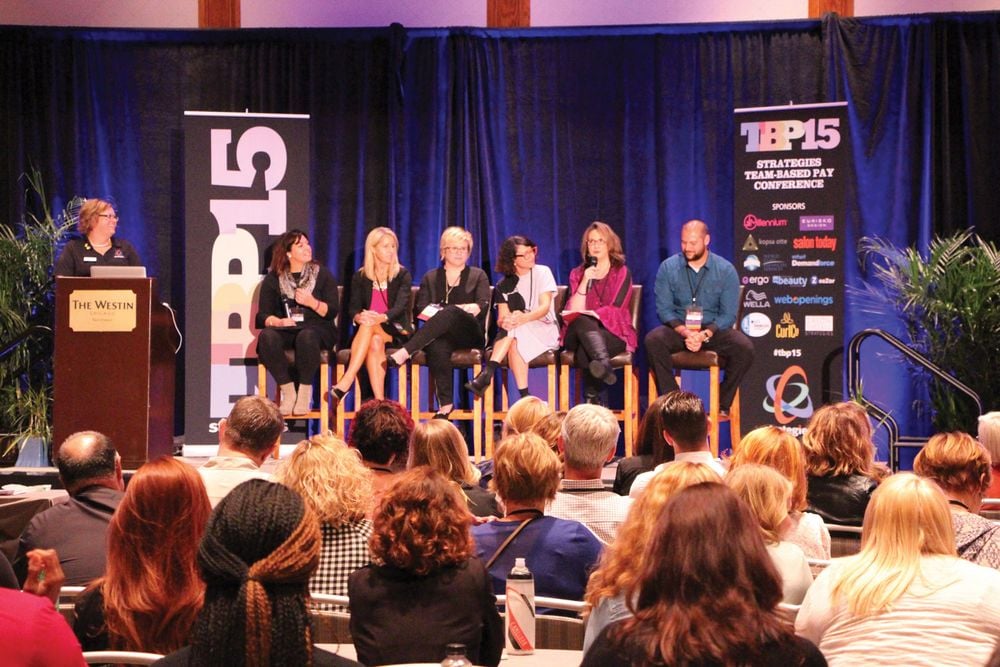 At a panel session moderated by Strategies’ Kristin Stutz, salon owners shared the successes and challenges of Team-Based Pay.

The 2015 Team-Based Pay Conference gets underway in Itasca, Illinois.
1/2
View all

1/2
Slider
At a panel session moderated by Strategies’ Kristin Stutz, salon owners shared the successes and challenges of Team-Based Pay.

2/2
Slider
The 2015 Team-Based Pay Conference gets underway in Itasca, Illinois.

Strategies, a leading national business management training and coaching company for salons, spas and medspas, held their second annual Team-Based Pay Conference on September 27-28, 2015 at the Westin Chicago Northwest in Itasca, Illinois. More than 200 attendees were at the conference, as well as 14 exhibitors.

Team-Based Pay (TBP) is a compensation system that offers an alternative to commission-based systems. In team-based

pay, owners pay service providers an hourly rate, plus a team bonus system that rewards employees on aspects such as client

The Team-Based Pay Conference is an annual gathering where both salons on team-based pay and those not come together to network, share experiences and learn about Strategies’ TBP business model. Strategies Founder and CEO Neil Ducoff stressed that success on the team-based pay plan requires positive company culture—and culture reflects leadership.

In addition to the multitude of breakouts and general sessions, TBP15 also featured a team-based pay owners and managers panel discussion moderated by Strategies’ Director of Education Kristin Stutz. During this 90-minute panel, attendees heard from six well-established salons, spas and medspas, as they each shared their successes on TBP, as well as the obstacles they have overcome since making the conversion to TBP.

salons and spas across eight categories. Ann Bray, 2014 International Hairstylist of the Year and celebrity stylist for the Hunger Games, was the featured speaker at the TBP Awards. Bray told the story of how TBP not only saved her family’s salon from closing, but also how it helped them to become profitable and debt-free.

The next Team-Based Pay Conference will be September 18-19, 2016 in Itasca, Illinois. Visit strategies.com for more information.