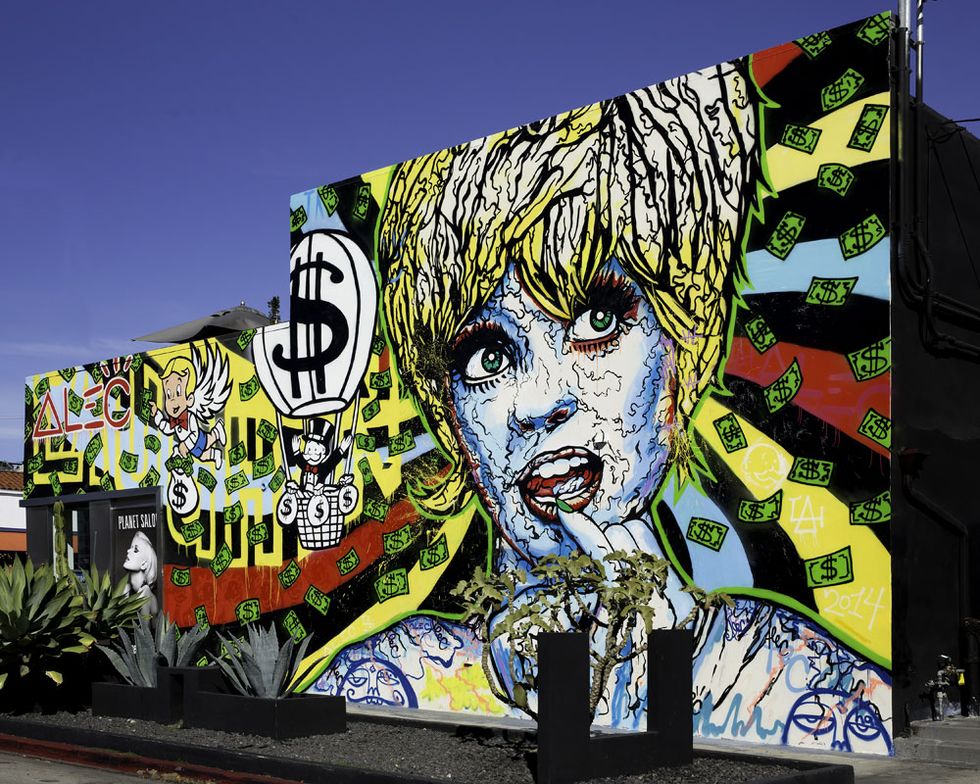 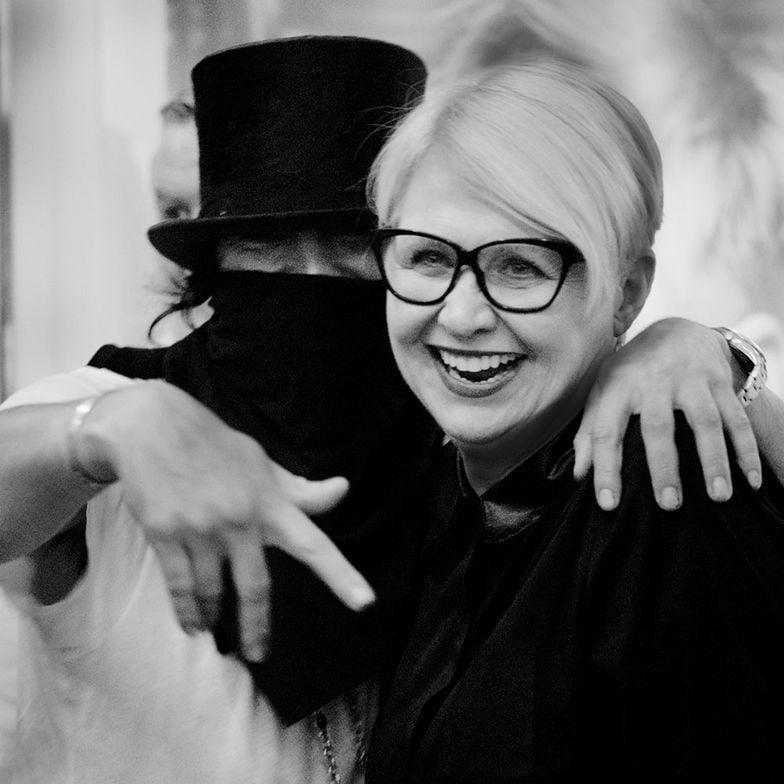 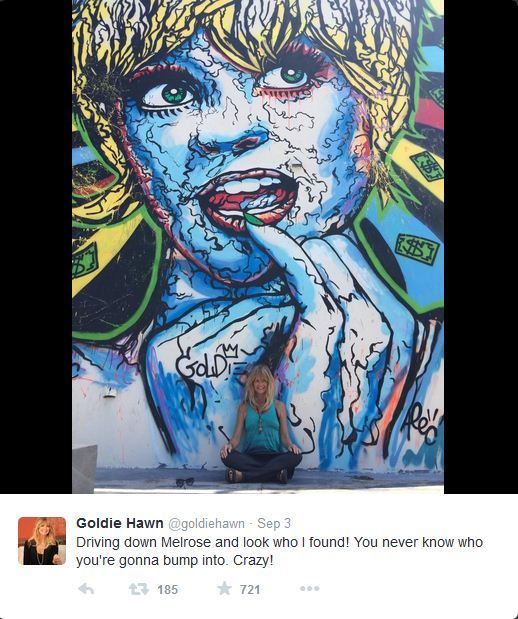 Three months after Ginger Boyle opened her Planet Salon location on Los Angeles’ trendy Melrose Avenue, she was approached by a young street artist who was eager to paint a piece on her exterior wall.

“I didn’t know if I wanted that; I wasn’t sure if graffiti was us,” says Boyle, who relocated her 20-year-old upscale business in early 2014. “I tried to put him off by saying I couldn’t pay for it, but he was willing to do it for free. When I still didn’t respond after a few weeks, he brought in his mother to meet me and talk to me about his art—probably because she was closer to my age.”

Ultimately, Boyle figured she had nothing to lose because she could always repaint the wall black, so she gave her consent. What she didn’t initially realize was her new artist already had quite a following.

Alec Monopoly is the alias of an underground graffiti artist originally from New York. Monopoly has worked in the urban environments of New York, Miami, Los Angeles, Europe and Asia, subversively depicting various pop culture icons. His art has been covered by The Wall Street Journal, Playboy, Rolling Stone and The Huffington Post.

Many of his street murals contain pop-culture symbols of wealth, such as the Monopoly Man, Richie Rich or Uncle Scrooge. In 2012, he joined forces with The W Hotel, Vitamin Water and Madonna for live, street-art renditions of a classic series of photographs Richard Corman took of Madonna in the 1980s.

“I learned that Alec is a traditionally trained artist who took to street art after witnessing friends lose their fortunes to Bernie Madoff,” Boyle says. “He tags buildings with his art to rain money on people and businesses he likes.”

When Monopoly approached Boyle, he was interested in developing a presence in Los Angeles, and the salon owner knew the modern-day Robin Hood’s work on her salon would likely get noticed. Located next to the famous comedy club The Improv, the salon’s wall is along a wide side street, making it one of the most visible on Melrose Avenue.

After learning that Monopoly’s work frequently featured pop-icons like Michael Jackson or Jack Nicholson, Boyle gave him one condition—because her business is a salon, she asked if the mural could feature a woman.

Monopoly had gotten in trouble with the law for his graffiti in New York, but Boyle secured a permit for him to work on her building.

“Minutes after he started, the police arrived, but Alec had a bodyguard and the permit,” Boyle says. “As he worked, he let people add to the art as they passed by, and I have a picture of a little girl spray painting the wall. It became a community effort.”

Boyle had a trip scheduled during the process, but before she left, she could make out the outline of actress Goldie Hawn in the mural.

“While waiting at the airport, I caught a news report about how classic Laugh In and Hawn are, and I thought to myself, ‘Maybe Alec is smarter than I thought,’” Boyle says.

Apparently so. During the three days the street artist was painting the side of Planet Salon for free, Boyle says a constant stream of high-end cars passed the salon to check out his work. While working on the piece, he sold three paintings for a total of $30,000 to people who stopped to talk to him.

As for Boyle and Planet Salon, the mural has become an unending, guerilla-style marketing machine that has swept them into the public eye. Boyle figures at least three people a day post pictures of themselves in front of the mural on social media. One of the first was Kylie Jenner, who runs in the same social crowd as Monopoly. The salon staff also caught Goldie Hawn taking a selfie with her likeness.

Social media posts by celebrities, such as Goldie Hawn, created immediate exposure for the mural and for Planet Salon.

“I never thought it would end up being one of the best things I ever did,” Boyle says.

The salon has more walk-ins than Boyle has ever experienced. Monopoly’s work even put the salon on the Graffiti and Mural tour of Los Angeles, and the tour buses slow down after The Improv to point out the salon’s wall.

“Just the other day, we had a group of tourists from Denmark walk in with an art map in hand, looking for Alec’s work,” Boyle says.

Boyle’s landlord has thanked her for the value the mural brings his building, and she recently went to a Chamber of Commerce meeting where other business owners were grateful for the additional visibility. Since the mural went up, she’s been approached by five local graffiti artists wanting to paint over it. When other graffiti artists do tag the wall with their signature, Boyle simply texts Monopoly to restore the work.

Moving to Melrose and the mural have helped the new Planet Salon attract Hollywood’s movers and shakers.

“Not the Beverly Hills crowd who need a label, but the people who work behind the scenes in Hollywood and are attracted to art,” Boyle says. “We’ve been able to raise our prices.”

The salon also attracts a specific breed of lucrative client—the LA beauty blogger. “These young girls post tons of YouTube videos and have a million followers, and they talk to each other,” Boyle says. “I’m always shocked at how much they’ll spend.”

Although Boyle admits a few clients have questioned her on why she’d ever let someone do that to her wall, she’s formed her own rationale.

“They tend to be the clients I don’t want anyway—the ones who complain about everything,” Boyle says.

“They see the mural, and it’s the kind of art they follow; it makes them feel you understand them,” she says.

Boyle says Monopoly attends some of the salon’s events with high-profile friends, including a recent fashion open house.

“He and his friends added to the mural outside as stylists were braiding hair and models were roaming around, she says. “We had an audience that spanned from the very young to the quite mature, but there was something for everyone.

“The entire experience has opened up a whole new world to me, and it’s gained the salon a wealthy clientele,” Boyle adds.

Which is exactly what Monopoly planned all along. From time to time, he calls Boyle to check in.

“He’ll ask me, ‘Mama, are you making money?’” Boyle says. “When I respond that things are great and business is up, he’ll answer, ‘That’s because I rained money on you!’”

Mindbody President Sunil Rajasekar explores some of the findings in the company's 2022 Wellness Index, including a heightened interest in services that boost immune health.

Growth Comes to an Extensions-Only Salon

Shifting to a singular, high-demand, and highly profitable service with a membership plan helped a Colorado salon reach new heights.