Whether you have an established men’s business or you’re looking to expand your salon by focusing on the local men’s market, the best way to maximize your sales potential is by understanding the male psyche when it comes to grooming.

MODERN SALON Media recently conducted a comprehensive study on men’s grooming, which was underwritten by American Crew and SportClips. The Priority Male Study explored what drives men’s grooming practices, including what they look for in a salon/barbershop, as well as what they want in a professional grooming experience. 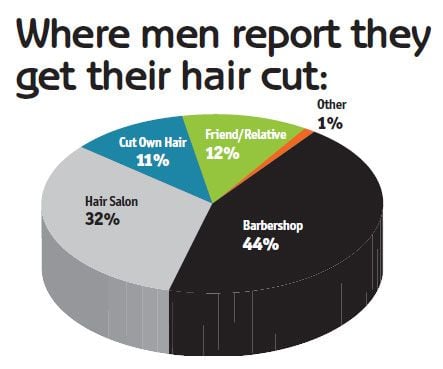 When it comes to men’s grooming, the haircut takes center stage. But, what does that service entail?

On the other hand, 22% of professionals say a men’s cut at their salon includes shaving the neck with a straight razor, while 42% of men say their cut comes with this upgraded service.

Cost: Professionals report that their salons/barbershops charge an average $28.30 for a men’s cut. But the survey’s male clients claim they’re paying almost $10 less, with an average price of $18.50.

Why the difference? The largest percentage of our male respondents (44%) get their hair cut at a barbershop, followed by 32% at a salon, while the vast majority of our professional respondents (95%) work in a salon.

Frequency: How often do men get their haircut? Stylists/barbers predict that the average time between haircuts for their male clients is 3.8 weeks, with the largest percentage (47%) getting their hair cut every four weeks. According to the male clients, the average time between haircuts is closer to 5.1 weeks, with younger men and African-American men getting their hair cut more frequently.

Changing it Up: Our salon professionals claim, on average, a little more than a quarter of their male clients regularly change their haircut, including length and/or style. Two-thirds of men admit they rarely or never change their haircut or style, but 40% say they are willing to experiment. 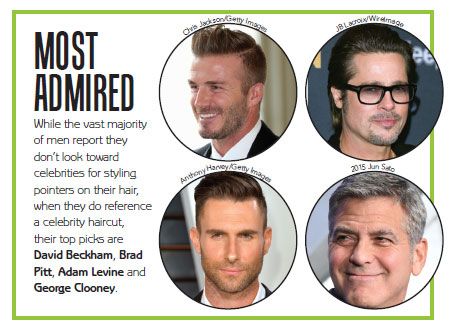 Influencers: What defines a great men’s haircut? Depends on who you ask. Stylists/barbers believe the number one characteristic of a great cut is blending, or the desired transition between areas of longer and shorter hair. Other important characteristics that professionals rank highly include the hair style fits client’s face/head and that the stylist/barber knows how to cut according to the client’s wishes. Men, on the other hand, don’t have a clear-cut characteristic that best defines a good cut. Their responses were even across the board, but the five most important characteristics included appropriate cut length, that the hairstyle fits face/head, that the stylist/barber knows how to cut the client’s style or cuts according to the client’s wishes, and blending.

While stylists/barbers believe that men rely on their suggestions of how to cut and style their hair 67% of the time, men actually report that they rely on professional suggestions closer to 46% of the time.

The vast majority of men (82%) say it’s their own opinion that matters most when deciding if a haircut is good or not, but 63% also say the opinion of a significant other is important.

It appears that men don’t look toward celebrities for inspiration on style, but when they do reference a celebrity, the top picks, according to professionals and male clients, are David Beckham, Brad Pitt, Adam Levine, and George Clooney.

And, what about color?

Compared to the haircut, men’s coloring services are a significantly smaller part of the business. Professionals indicate that less than 20% of male clients color their hair. At 88%, the vast majority of men report that they have never had a color or gray/blending service, but of those who have, 43% say they get it done at every appointment or most of the time.

IT’S ALL ABOUT THE EXPERIENCE 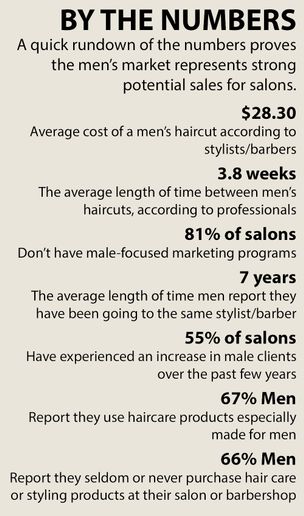 How do men choose the salon or barbershop they patronize, and why do they stay? What happens when they aren’t happy? In this part of the Priority Male Study, we took a closer look at the importance of the overall grooming experience.

Stylists/barbers believe they themselves play an important role when it comes to men choosing a location to get a haircut. Professionals report that convenience to work or home, expertise of the stylist or barber, a specific barber or stylist, and cost are primary drivers in the decision-making.

In actuality, men seem to be more practical and less emotional about their location decision. Male clients reported their top most important factors when choosing a barbershop or salon are cost, convenience to home or work, cleanliness and value. But the expertise of the barbers/stylists in general and a specific barber/stylist are important secondary drivers.

Do men like chitchat as much as female clients? The answer seems to be yes. Twenty-two percent of men always prefer to be talked to during their service, while 32% of men say they want chatter most of the time.

When it comes to choosing a service provider, 30% of men prefer a female stylist/barber and 27% would gravitate to a male—43% have no preference.

Where do men go for haircuts? Most respondents (52%) get their hair cut in a suburban location, while 38% get groomed at an urban locale.

According to professionals (and remember most worked in a salon), their male clients make appointments for their haircuts 70% of the time. Men reported a somewhat lower number—with almost equal numbers of men making appointments as those who prefer to walk in. 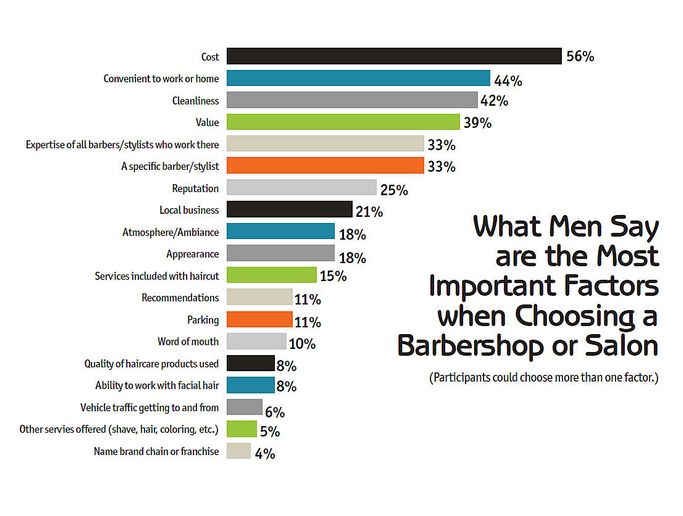 KEEP THEM COMING BACK 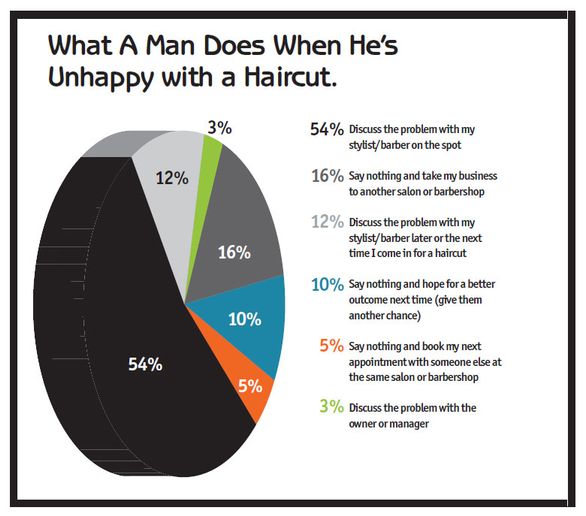 Many professionals in the beauty industry have said that male guests are creatures of habit, which tends to make them more loyal to their stylist or barber than female clients. The Priority Male Study backs up this assumption.

Now that we’ve convinced you that men are a valuable market segment, and we’ve shown you what men want, let’s talk about how to get them through your front door.

According to the Priority Male Study, 55% of salons say their male client base is growing, yet 81% of professionals surveyed say their salon does not have a marketing program aimed at attracting male clients. Seems like a missed opportunity.

So, how are men finding these salons without targeted marketing? Of the professionals we surveyed, 74% believed that word-of-mouth was the most important way male clients first hear of their salon, while 58% believe recommendation was also key. According to male clientele though, they said driving or walking by the salon/barbershop was the first way they heard of the place they currently get their hair cut, followed by word-of-mouth and recommendation.

When it comes to social media, 79% of our professionals say their salon/barbershop has a branded Facebook, 59% have a website and 34% have Instagram. Of the social media choices, professionals believe Facebook is the most popular social media site visited by male clients.

How does retail factor into the male equation? Do men buy retail product, and do they want to buy it in the salon/barbershop environment?

According to professionals, more than half of their male guests use styling products on their hair, and an average of 40% of male clients purchase styling products or retail at their salon/barbershop. Sixty-eight percent of stylists/barbers believe they have a “great deal” or “quite a bit” of influence on what haircare men purchase, and almost 100% say they  are comfortable in suggesting products to men.

Almost two-thirds of the male clients surveyed said they use haircare products made especially for men, and 43% of men say they use a styling product “always” or “most of the time.” Of the men surveyed, two-thirds say they seldom or never purchase haircare or styling products at their salon/barbershop. And 53% of male clients surveyed report that their stylists/barbers have little or no influence on their product purchasing decision. Despite this fact, a third of men indicate that would be likely to purchase haircare products at the recommendation of their stylist/barber. 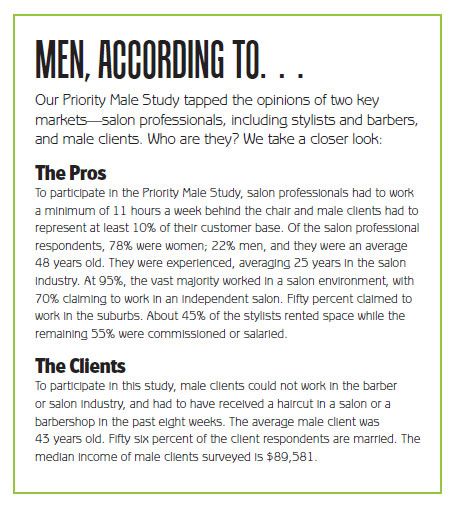 When it comes to cutting men’s hair, our respondents showed quite a bit of confidence.

At 96%, the vast majority report they are either completely comfortable or mostly comfortable cutting men’s hair. That’s likely because almost 70% of stylists report having a “great deal” or “quite a bit” of training with men’s hair.

Where are they getting this training? The most-widely mentioned sources are simple experience working on male clients and advanced education offered in classes or at academies, followed by manufacturer-sponsored education, from their co-workers and peers, at cosmetology school and online classes. 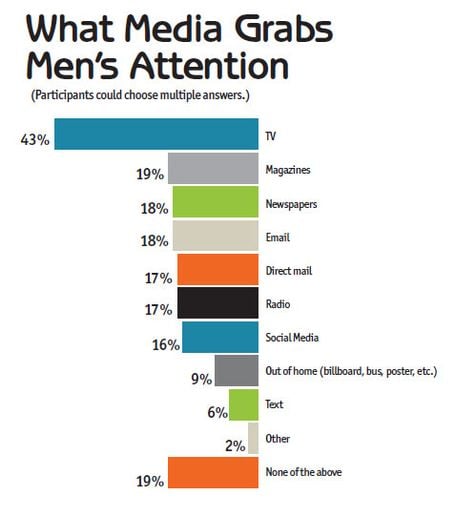 Since the Priority Male Study interviewed male clients who frequented salons, as well as those who visited barbershops, it gave us an opportunity to study the difference between the two kinds of male guests. Here are a few statistically significant differences:

Through Booksy's no-show protection feature, service providers can charge clients a percentage of a service upfront or apply a cancellation fee in case of a no-show or last-minute cancellation.

How Gender Neutrality Can Help Your Business

In recent years, a new culture of beauty has bloomed, and it’s grown into a rich garden of diversity & inclusivity. The beauty industry is saying goodbye to the Eurocentric standard of beauty—tall, young, thin, blonde, and blue eyed—and hello to present-day values of inclusion. Along with this shift is the rise of genderless fashion, and hair stylists are helping to shape this new narrative.

Vagaro scheduling and management software helps keep salons and spas running efficiently with all the tools a modern owner needs, including online booking, a POS system, email and text marketing, push notifications and much more.