For nearly two decades, SALON TODAY has taken the pulse of salon and spa business through our Salon Today 200 competitions. Each summer, applicants across North America painstakingly fill out pages of detailed questions about every aspect of their business and craft 1,000-word essays in up to 11 different competition categories. Over the fall months, our team dives in, reading and scoring each application, tabulating data, determining the list of honorees and profiling each salon or spa.

As we ring in the New Year, SALON TODAY wraps up the result of all this work as our gift to the professional beauty industry—a comprehensive sketch of the current state of salon and spa business. The data we derive establishes important annual benchmarks, allowing the owners of salons and spas of all sizes a barometer by which they can measure their own success. The best practice ideas shared by the honorees spark new thinking among owners and encourages them to share their own success stories. And, the candid and spirited pictures draw readers into a special community developed exclusively for those tasked with managing a thriving salon or spa business.

As you prepare your own business for New Year, we proudly present to you the 2015 Class of the Salon Today 200. 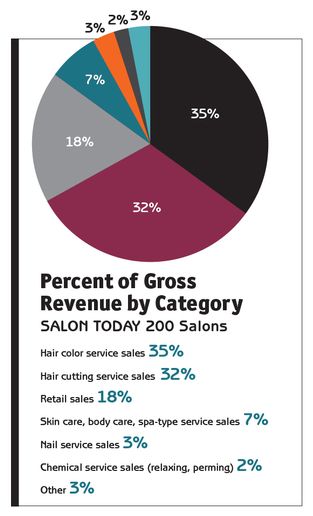 By studying the composite data from all 200 honorees, we sketch a rendering of what the average ST200 salon looks like by showcasing the averages of the entire group.

The average SALON TODAY 200 salon/spa IS: 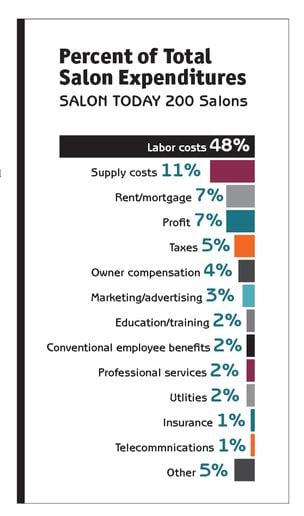 THE ST200 OWNER: A SELF PORTRAIT

Among the ST200, 64% of the owners continue to perform client services. Of those who do, owners spend an average of 25 hours a week performing services – the same as last year.

Owners of ST200 salons/spas on average review two Key Performance Indicators to assess their health of their business—productivity (26%) and average ticket (20). Salons with revenues between $1 million and $1.9 million were more likely to put emphasis on client retention of existing clients, than owners of salons bringing in less revenue.

ST200 owners fell they have the least control over the expense areas of inventory and shrinkage, as well as the cost of service supplies, including the backbar and haircolor. The costs they feel they have the most control lover are retail commission, service and non-service payrolls, and education and training expenses.

When asked what keeps them up at night, owners listed the inability to reduce expenses and keeping their staff busy are the top two reasons. Other areas that cause owners concern fall into four areas: providing motivation and career paths for staff; determining how to grow third business; how to find good people and how to better manage their own time.

About half of owners (53%) set up an annual budget for salon improvements, and of those who do this amount represents 2.5% of the overall salon budget – which is down from last year’s 3.3%.

Three in four of the ST200 salons order their retail products once a week. Salons with lower growing revenues are more likely to order retail less frequently at twice a month. The majority of ST200 owners keep a tight rein on product—counting and adjusting their inventories either weekly or monthly. 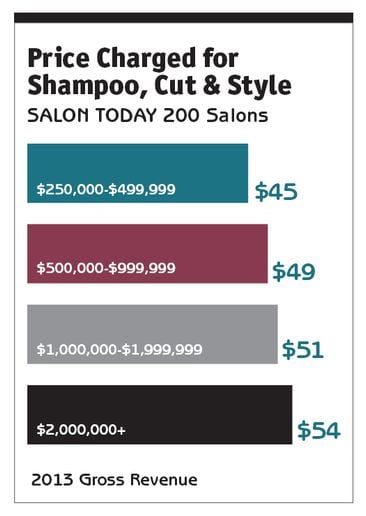 THE VIEW FROM HERE

By reviewing historical data from the past six ST200 competitions, we are able to paint a broader picture of national trends for the professional beauty industry.

At the same time, growth rates, at 13%, slowed to rates closer to the recession years. Most likely, that’s because the post-recession rebound caused growth spikes of 17% in 2013 and 19% in 2014 that were inconsistent with growth rates in normal year.