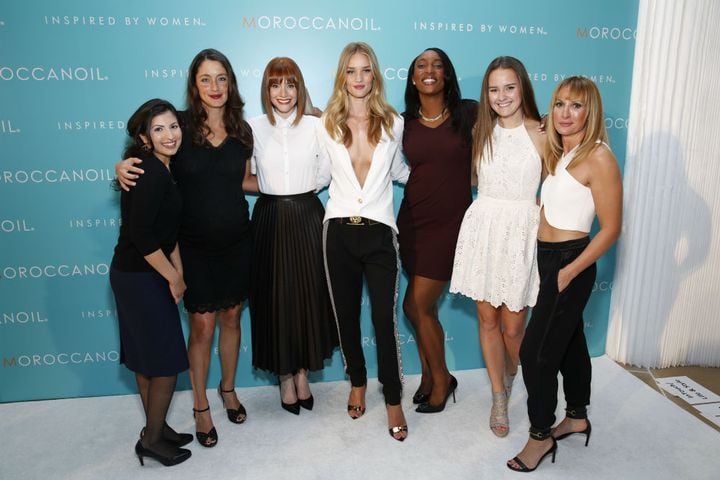 To inspire, celebrate and empower women around the world, Moroccanoil launched its first multimedia ad campaign centering around the digital short-film series Inspired, helmed by filmmaker Bryce Dallas Howard and Academy Award and Emmy-winning producers RadicalMedia. Joining Moroccanoil on the journey as the Inspired Amabassador is British supermodel and actress Rosie Huntington-Whiteley.The series features the stories of five extraordinary women driven to make a positive impact in the world, and also explores what it means to lead an inspired life as seen through the eyes of Huntington-Whitely. Featuring a musical score by Grammy Award-winning film composer Lorne Balfe, the series includes the following five inspired women:

Chrissy Beckles steps into the ring to fight for those who can’t. This trained boxer founded The Sato Project to save abandoned dogs on Puerto Rico’s “Dead Dog Beach.”

Rebecca Welsh helps homeless and at-risk youth around the world to start a new life. The HALO Foundation provides these children with basic needs and essential life skills, using art therapy to help them heal from the past and imagine the future.

Jessica O. Matthews incites change through innovation. She's the Co-founder and CEO of the organization Uncharted Play, and inventor of the SOCCKET—a soccer ball that generates free, renewable energy by harnessing the kinetic power of play.

Kavita Shukla designs simple solutions to complex global challenges. She is the Founder and CEO of Fenugreen, a social enterprise taking on global food waste and hunger, and the inventor of FreshPaper—a piece of paper infused with spices that keeps fruits and vegetables fresh 2–4 times longer.

Allyson Ahlstrom transforms the looks—and lives—of at-risk teen girls. When she was just 14, she started the mobile boutique Thread for Teens,, which provides free, brand-new clothes to teen girls across the U.S.

To watch the short-film series, go to YouTube.com/Moroccanoil. Fans and viewers are also encouraged to be part of the INSPIRED BY WOMEN™ conversation by sharing a woman in their life who inspires them via social media, using the hashtag #InspiredbyWomen.

A variety of top-notch speakers help attendees to Phorest's Salon Owners Summit in Dublin, Ireland, set their 2020 vision for their salon business.

Three Rosy Rewards scholarships granted to deserving cosmetology students, helping them by covering a portion of their tuition.

Industry veterans including Ian Murphy are joining the team during an exciting time for the company.

"That first set of nails I did in the salon sucked but that client still comes back to me, three years later, because of the connection we made that day." Hear from the winners of these scholarships on how beauty helps them change lives and how it has changed their own.

Are You In? An Open Letter to the Beauty Industry

Beauty In Her Blood: An Industry Icon Reflects on a Beautiful Career

Joni Rae Russell has launched countless products and bolstered hundreds of brands. As she prepares to close her business and enjoy some well-deserved relaxation, we asked her to share her thoughts on a life in beauty.

The national children’s hair salon franchise, with 64 locations in 22 states, has announced plans to continue to expand its national footprint.

In our video section, watch salon professionals in action, listen to the advice of salon business experts, and tour inside the world’s top salons.

The annual Hollywood Beauty Awards (HBAs), founded by Michele Elyzabeth, will celebrate their 6th year honoring the architects of beauty on Thursday, February 6, 2020 at the Taglyan, recognizing talent in hair, makeup, photography and styling for Film, TV, Music, the red carpet and editorial, as well as special honorees.

As part of the transaction, Helen of Troy will grant a worldwide license to Drybar Holdings LLC, the owner and long-time operator of Drybar blowout salons, to use the Drybar trademark in their continued operation of Drybar salons.

Feeling Defeated After Salon Setbacks, She Staged a Beautiful Comeback

“I knew I couldn’t fail more than I already had, so I really had nothing left to lose.” Find out how this talented stylist reinvented herself and her career.

Is There a Leak in Your Business?

Hear about the salon owner/entrepreneur who saw a problem at the color bar and developed a system to make color pricing more accurate and predictable.