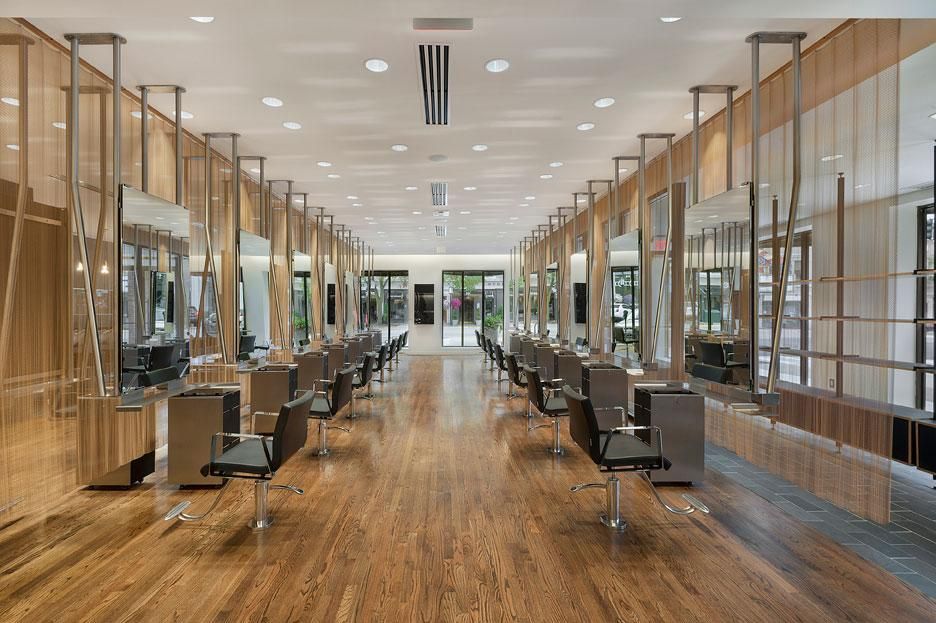 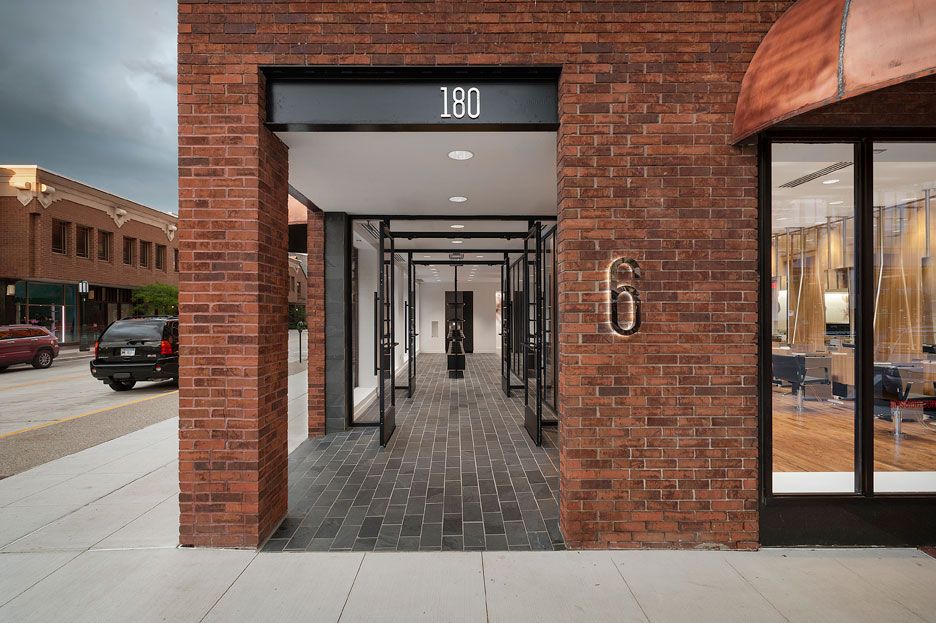 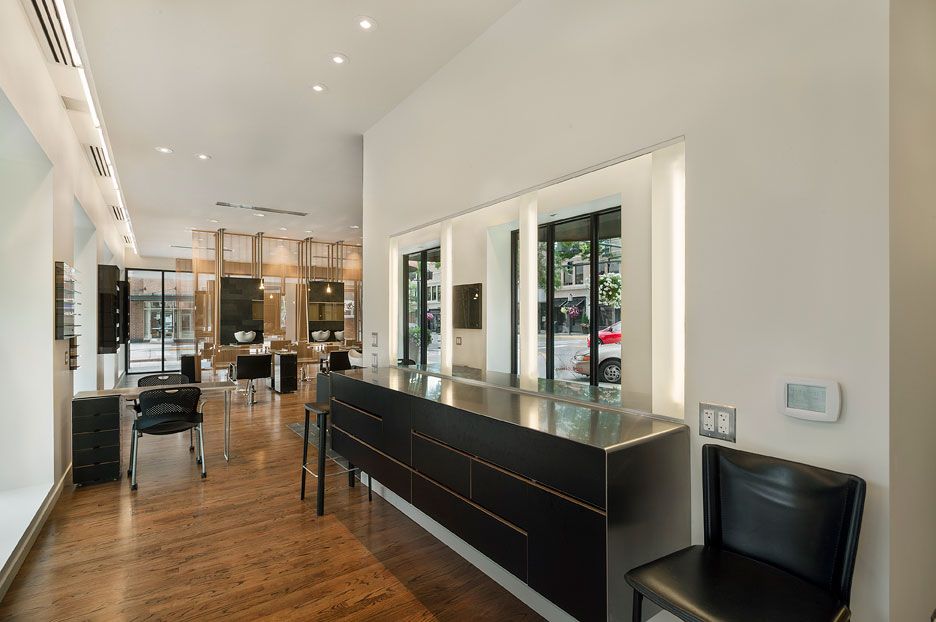 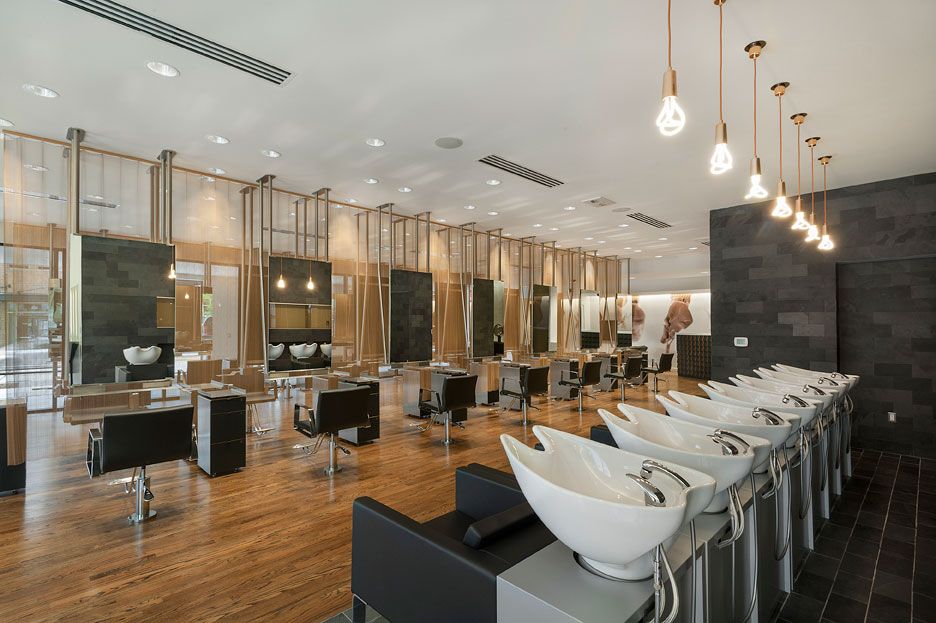 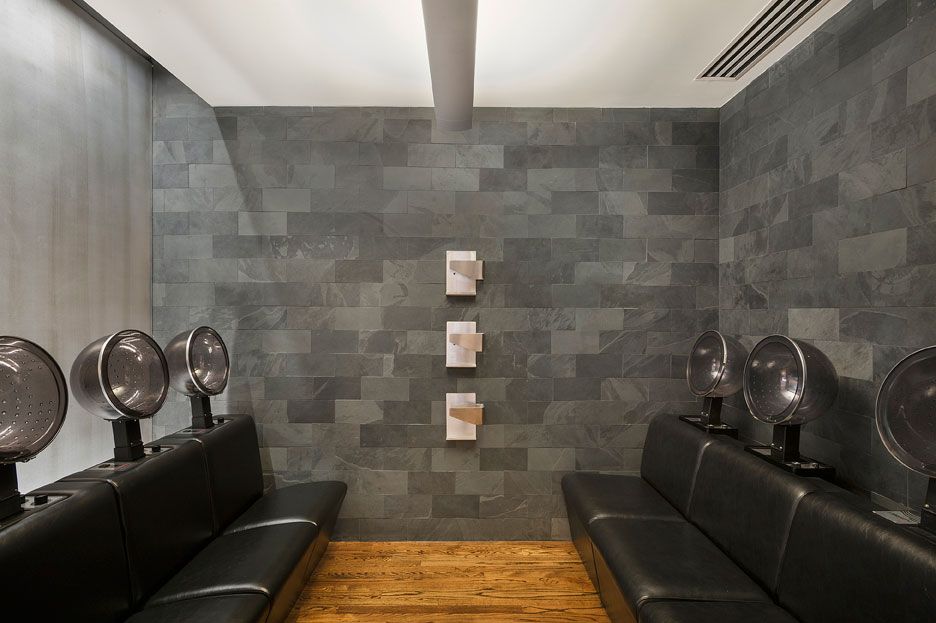 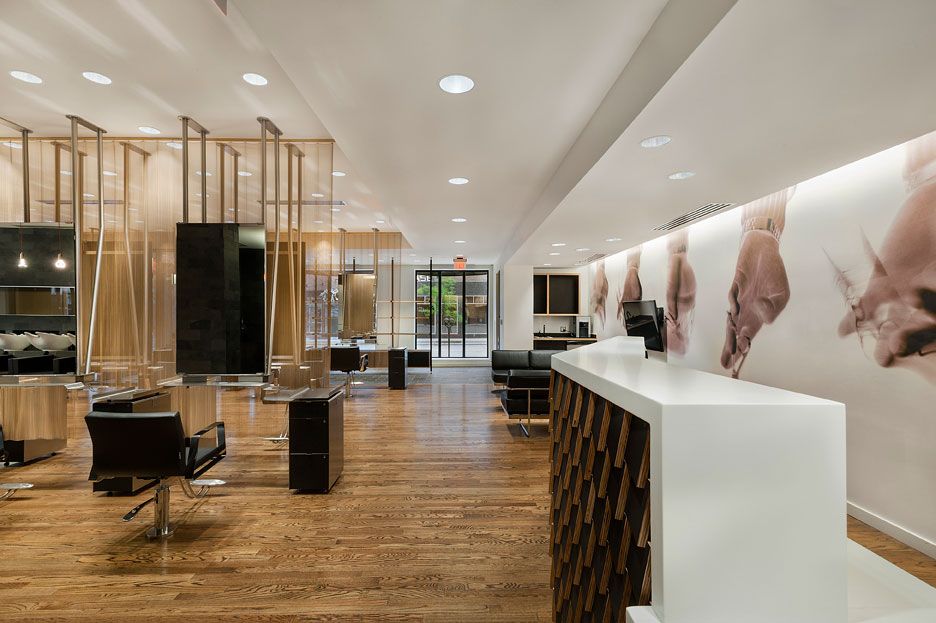 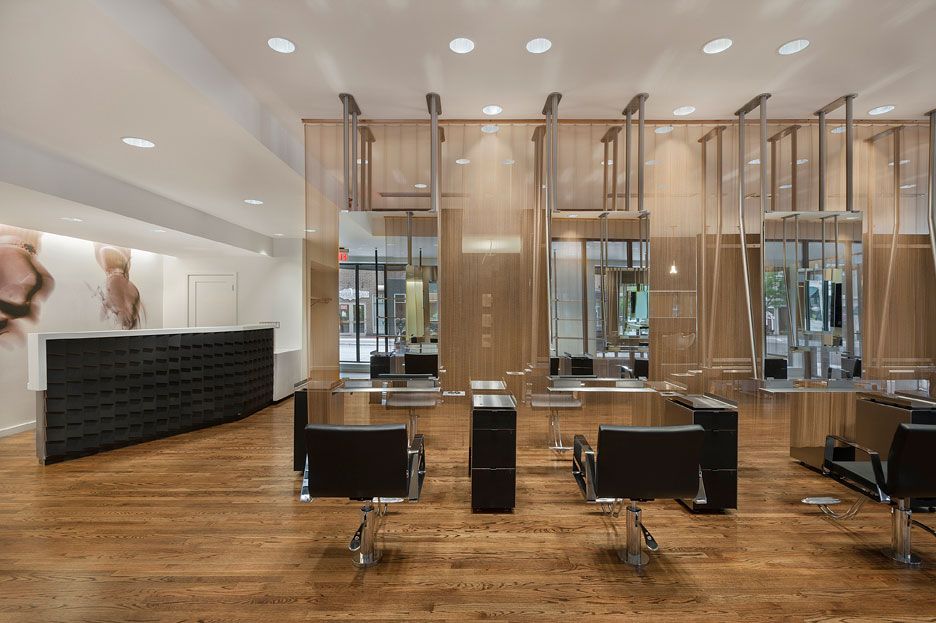 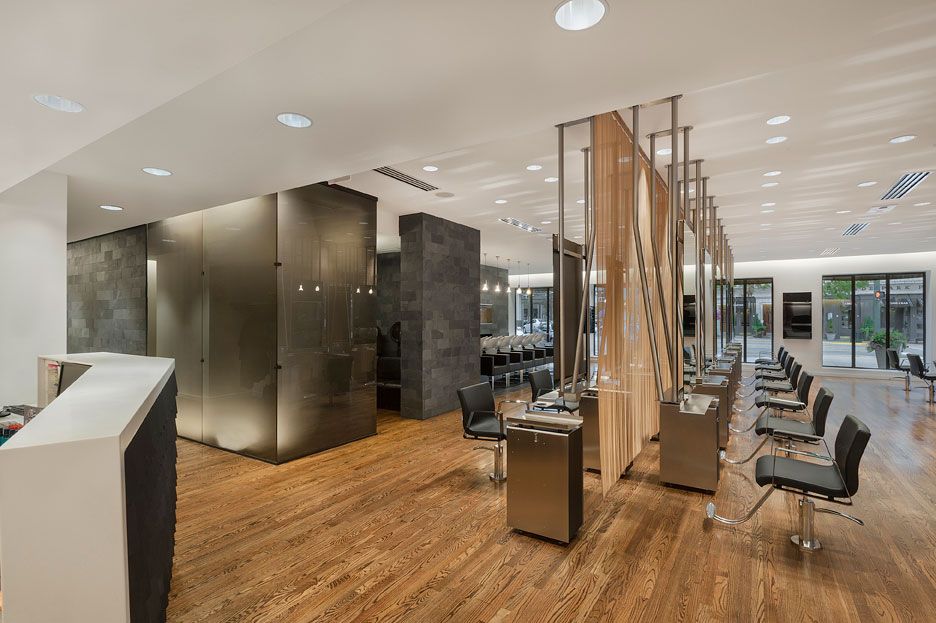 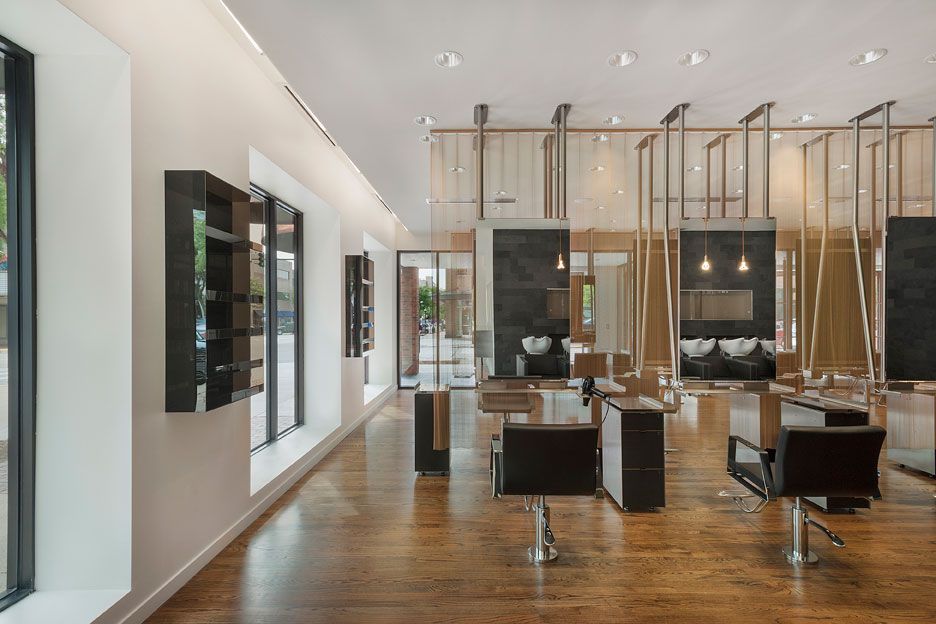 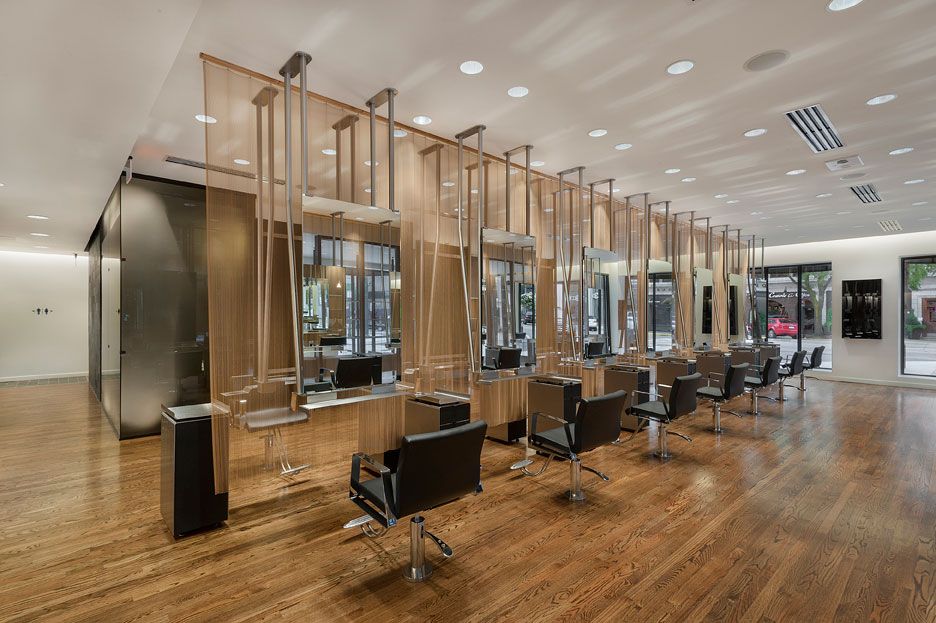 When a high-profile corner location which formerly housed a men’s clothing store became available in downtown Birmingham, Michigan, the three owners of 6 Salon knew they wanted it for their new home. “It’s the best location in the city, in fact it’s arguably the best location in Michigan,” says Tomy Lulgjuraj, who owns 6 with Johnny and George Nikollaj. “The space is filled with street-facing windows, which not only brings in lots of natural daylight, but provides the salon a high amount of visibility.”

The owners seized the opportunity, and moved the salon over a few streets from Maple, where their second location had operated for nearly 11 years. In the process, the salon more than doubled its space, going from 1,850 square feet to 4,500. “Initially, we were concerned the bigger space would not feel as alive and bustling,” Lulgjuraj says. “However the space is organized in a resourceful way that creates a clear cutting area for clients, with support areas expanding out from there. This helps us accommodate all of the services we provide, while still creating a successful daily business flow.”

To define the space, yet maintain transparency so clients could see what was happening around them, the salon’s designer suggested hanging metal mesh drapes behind the uniquly suspended styling stations. “Originally we were envisioning a silver or stainless steel drape. But then we asked the owner of the building if we could take down a copper-colored awning on the exterior and he told us no, because it had been a staple in the community for more than 60 years,” Lulgjuraj says. “So we decided to play off of it and went with copper mesh drapes, which ended up coordinating with the wood floors beautifully.”

With three male owners and a male designer, Lulgjuraj admits the resulting design has a masculine feel that is equally alluring to women. “Our target market is female and male guests, aged 18 to 60, and there are elements that appeal to both sexes, including the ceiling-suspended, stainless steel styling stations; the oak hardwood floors; slate flooring and wall surfaces; high-tech dimpled plywood and copper accents—all of which are visible from the street.”

The salon’s retail area was designed to enhance profitability. The shelves are two-faced, so retail can be seen from either side of the shelf. Guests see the retail from the street, when walking in or out of the salon and while getting their hair done.

For the one long wall without windows, the owners requested a visual focal point. The designer suggested using a series of images he owned with a hand flipping shears in a number of different poses. Negatives of the images were blown up and printed on wallpaper by the Detroit Wallpaper Company. Yet again, the modern images can be viewed from the street, reinforcing to passersby that this new business is a hip and happening salon.

All the risks seemed to have paid off. Lulgjuraj says the visibility of the space and the new location are bringing in an average of 80 new guests a week. “Even though we weren’t that far from here originally, many new guests will tell us they were never aware of our former location.”

“Our copper mesh curtains and ceiling-suspended styling stations create a comfortable environment and open floor plan. This visually sets the tone for our clients to feel relaxed and connected to everything going on around them.”

“The consistency kept throughout the salon gives a flow that makes it easy to understand the brand message.”—Crisafulli

“The architecturally detailed styling stations and slate walls, paired with the clean, sleek overall feel give 6 salon an atmosphere that is both dramatic and inviting.”—Hillenmeyer

“The stealth-like furniture mixed with the metal elements enhances the modern theme. The overall design is flawless.”—Grissler