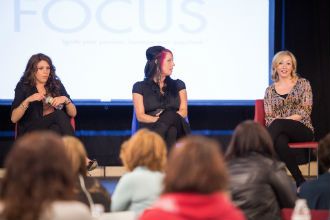 Now that Frank Zona has grown Zona Salons into three locations surrounding Weymouth Massachusetts, he makes it a goal to get before the entire team about eight times a year to review the company’s performance, reinforce goals, and identify opportunities. In addition, Zona plans two staff appreciation events a year, a day-long annual summit and several technical education events per year.

But this past April, Zona took the gathering idea one step further by organizing the staff’s first annual symposium in a local, community art center. “This one was more of a team thinking and planning session,” says Zona. “It was still inspirational—but in the idea sense rather than the artistic sense.”

For the symposium, Zona brought in William Edge, a fellow salon owner and motivational speaker to kick off the day, and he hired Qnity’s Tom Kuhn to share success factors and coach the staff through setting and achieving specific salon goals in the afternoon. But Zona also wanted to feature and celebrate some of his own staff in the roster of speakers, while at the same time addressing a need he’d witnessed among his team.

For many years, Zona has conducted an annual financial questionnaire of his staff asking them what they’d like their W2 to read the following year, and what are some of their personal financial goals, as well as their plans for attaining those goals. “Although I don’t know what the stats are, when I think about a stylist leaving a salon or even industry, it really has to do with the stylist’s perception of their own success.” the Zona. “And, many times, a stylist’s personal success is influenced more by the way they manage their money rather than how much they bring in.”

For Zona’s New England community, home ownership continues to be a benchmark of financial success, and a goal for many of his younger staff members. But over the years, he’s discovered that many of the recent cosmetology school grads didn’t have a personal financial plan for achieving those goals. So, Zona looked at the members of his team who’ve been able to purchase their own homes while in their 20s, and asked three of them if they’d be willing to share their personal stories in a special symposium session he dubbed The Prosperity Panel.

Zona invited stylists Michelle Freitas, Sheely Kotkoski and Stefanie Gilardo to participate in the Prosperity Panel and all three quickly agreed. In choosing the panelists, age was an important factor to Zona. “I wanted stylists who started their careers with us as interns and have grown with us, because sustainability is such a big factor in the success of a stylist,’ he says. “But I also wanted to chose people that were an age many of my young team could identify with, people they could look to and imagine achieving similar results in five or 10 years. Because when you’re running a road race, it’s the people right around you that you notice the most.”

That’s because, Zona says, over the years, he’s observed that the demographic of the young stylist is one that doesn’t know how to handle money or organize it. “We’ve literally taken people to the bank and showed them how to open up their first checking accounts, because they’ve never had one,” he remembers. “Many have never had a relationship with money, they don’t read their pay stubs and are really unaware of how much they are making,” says Zona. “And even when you show them their earning potential and our commission tracks, they get frustrated on the floor because they can’t imagine ever being able to achieve some of their big goals. The future can be overwhelming to them, but you need to tap into that hopefulness and give them something concrete to work toward.” 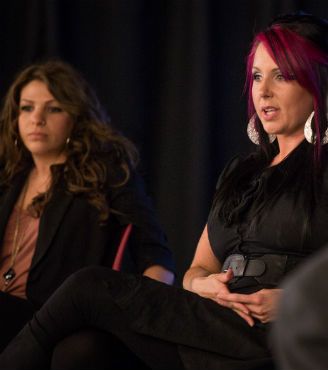 To prepare the panelists, Zona once again used Survey Monkey to find out what the team wanted to know when it came to finances and saving. He asked them how motivated they were by money, how organized and plan-oriented they felt about their finances, and invited them to submit individual questions for each panelist. To keep the panel running smoothly, he invited Kuhn to serve as moderator. According to the panelists, The Prosperity Panel was a huge success:

Kotosky: “I was really excited to be a part of the prosperity panel. This was the first salon I have ever worked in, and I was 19 when I started and knew nothing about saving money. Watching talented, driven senior stylists in the salon really put things into perspective for me. I wanted to be a great stylist and have a personal life. I really tried to live off of my tips and save as much of my paycheck as possible, which I still try to do. Michelle, Stefanie, and I all bought our homes in our early 20s. We literally practice what we preach.”

Gilardo: “I was nervous to be in front of everyone, but I wanted to share with my co-workers. Keeping myself organized keeps me in control of everything that involves money—and that can easily be the root to most anxiety. I explained to my colleagues that I keep my money in different accounts that keeps me from overspending. So each month, I know what I have to spend on bill, what I had to save for future investments, what I had to spend on myself and—most of all- have some emergency money for the ‘What if?’”

Freitas: “When you start in a salon that has successful, established stylists, it can be hard to remember that they too started fresh out of cosmetology school. I often hear in the salon ‘I'm going to start saving when I get on commission,’ or ‘I'm going to start saving when I start doing $300 more in service sales,’ and my question is always ‘Why not now?’ You will always find a reason to spend your money, but if you make it a priority to save you will. Live off of your tip income and save your paycheck or vice versa. When I started I gave myself a $50 budget for the week out of my tips. Anything I made more than that in tips went right to savings and I paid my bills with my paycheck. My other main price of advice is to never stop educating. If an opportunity for a class comes your way, find a way to make it happen! It may break the bank in the short term but will pay you back ten-fold in the long.”

While the future of his current staff is his immediate concern, Zona also has loftier goals. “When staff members are financially successful and grounded in their own success, they are less likely to do impulsive things, and both staff retention and customer satisfaction improve,” says Zona. “Customers can see how we are treating our staff and they like that we are elevating their thinking and life planning, instead of talking about the latest reality television plot. We hope it has a huge ripple effect, and shows parents out there who are scratching their heads over college tuition that the trades are a great career option.”