Blo’s owner Bryan Nunes doesn’t frequently use print advertising as part of his marketing strategy because he believes salon ads using stock images, a bold declaration and a promotional offer have fallen into what he calls a ‘mine’s-bigger-than-yours’ mentality. But after being chosen by a local weekly paper as the best salon in the county, Blo was offered an opportunity to purchase an ad in the “Best of” special publication at a reduced rate.

Nunes and his team started by studying past ads by other winners. “We knew other advertisers would be focusing on how many times they’d won and thanking readers for voting for them,” says Nunes. And, while he also wanted to play up the awards his salon has won, Nunes was cautious about appearing arrogant and unapproachable, so he turned the tables and took a clever consultation approach to the ad.

On the full page ad, the awards are subtly listed across the bottom, as one of Blo’s own model images makes up the bulk of the full page ad with a snipped-effect, highlighted tagline that reads, ‘Enough about us, now let’s talk about your hair.’

“The editor of the publication told us it was the smartest ad she had seen in her eight years of being associated with the ‘Best Of’ issue,” says Nunes. 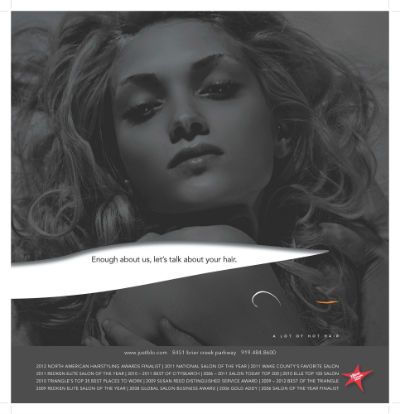 Celebrate your team, honor your clients and recognize your business. Share your success through the SALON TODAY 200, the highly esteemed competition for salon business.

The Application for SALON TODAY's Annual Marketing Program is Open!

It's our annual Show and Tell competition of the best salon, spa and barbership marketing and promotional pieces. Check out the application and enter before August 31, 2022.

The 2022 Barbershop of the Year

An eclectic collection of art, a mural celebrating a historic moment and a vivid blue epoxy floor create an artistic barbershop that welcomes everyone.