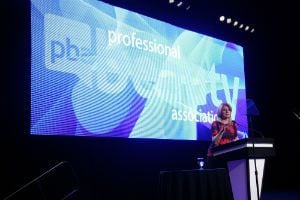 Media mogul Arianna Huffington shared some key business trends and life lessons at the PBA Beauty Forum held during Cosmoprof at Mandalay Bay in Las Vegas, July 14. The author of 13 books, an entrepreneur and the co-founder and editor in chief of The Huffington Post, Huffington started her talk on Fearless Leadership by revealing her vulnerabilities.

“My accent and my frizzy hair have been the bane of my existence,” Huffington told the beauty professionals, salon and spa owners, distributors and manufacturers who gathered for the early morning breakfast meeting. “All of us, but women in particular, tend to have an obnoxious roommate living in their heads, making them feel self-conscious. In fact, once I told Stephen Colbert, my obnoxious roommate sounded exactly like him and he laughed and said he’d moved in. But over time, I’ve learned to accept myself—to not judge myself.”

Huffington frequently drew her strength through wisdom she gained from her mother. “She used to say, ‘Failure is not the opposite of success—it’s the stepping stone to success.’ When she launched The Huffington Post, a business writer declared it ‘an unequivocal failure’ in a scathing review that Huffington has since memorized. Within a year, that same writer apologized and asked Huffington about an opportunity writing for her news site. “I said yes, because I think the worst thing you can do in business is hold grudges,” she says. 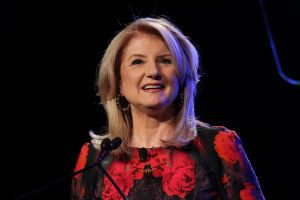 The New Measurement of Success: Huffington believes there is a transition in place in the corporate world. “Now we define success by money and power, but we should be defining it by wellbeing and health,” she says. “There are some very smart leaders who are making terrible decision.” Some of these bad decisions she attributes to stress and lack of sleep. Huffington believes there are shifts occurring in the corporate world.

“Right now in American workplaces, I believe we're experiencing a transition with regard to well-being. An increasing number of employers and employees alike are acknowledging that the current model of success isn't working, and is in fact leading to burnout, stress, decreased productivity, and — an epidemic with personal resonance to me — sleep-deprivation,” Huffington wrote in a blog for the Harvard Business Review. “Fortunately, many employers, in every industry imaginable, are learning to appreciate that the health of employees is directly connected to the health of the bottom line, and making concrete changes.

Catching Good Zs: In the past few years, Huffington has become so passionate about the importance of getting a good night’s sleep, she’s been invited to participate in the Harvard School of Medicine’s Sleep Medicine Corporate Leadership Summit. “Since I pushed myself to get 7-8 hours of sleep, I’ve found I’m more productive, effective and joyful,” she says. At her corporate offices, Huffington installed two napping rooms, and says that initially journalists laughed, but now the rooms are always booked. Huffington travels with several chiffon scarves and is hotel rooms she covers all electronic lights that might distract her from sleep.

"What we want from employees is their attention, not just their time," says Huffington. "Wouldn't you rather have someone whose giving you 100 percent?"

Getting Unplugged: While technology has brought us to the information age, it’s also brought us a new level of stress. Even though Huffington leads one of the largest social media and electronic news organizations, she firmly believes we each need to set time aside to unplug. “No one in our organization is expected to answer emails after hours or over the weekend, and if something is urgent, then they can text or call,” she says. “Constantly checking email and Facebook is an addiction—so you should never use your phone as an alarm clock nor sleep with the phone next to your bed.”

Huffington encouraged the audience to disconnect with technology (periodically) and connect with themselves. To help readers to just that, The Huffington Post developed an app, GPS for the Soul. The app allows users to measure their stress level then summon a guide through things like music, meditation, breathing exercises, poetry or pictures of loved ones which help them course correct.

Digital Media Today:  While social media originally started out as a fun communication platform, today Huffington says it’s all about engagement. “People no longer want to be talked to—they want to be part of the conversation,” she says. “Business should view it as a platform to engage with the consumer and let them tell you what’s working for them and what’s not.” But Huffington also agrees that social media is very powerful and it can start trends and build them very quickly.

The New Women’s Revolution: First women fought for the right to vote, then for equality and equal pay. Now, Huffington, believes women are changing the world of business “In boardrooms, it’s common to use war metaphors and sports metaphor when talking about business and your competition, but now language is starting to be more inclusive and talk more about concepts like teamwork,” says Huffington.