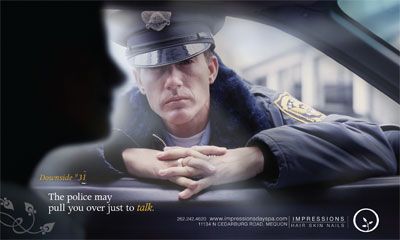 “In addition to reaching out to potential new clients, we wanted to prompt our clients who didn’t receive color to think about getting this service during the fall months, and encourage clients who do get color to think about a new twist,” says Wendy White McCown. Taking advantage of having live models at a styling class, she took pictures of the beautiful hair color work and used them to create an ad campaign for local magazines, as well as an in-salon campaign. During the campaign, each station featured “Fall-into-Color” cards, and a chalkboard over the front desk displayed the ad. The cost was minimal: $15 to decorate the chalkboard, $50 for the station signs, and $250 per magazine ad. The salon saved on ad costs by designing the ad themselves. 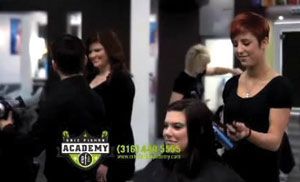 By hiring a Joan Rivers impersonator, Impressions spoofed the show Fashion Police in a comical radio commercial that had Rivers reviewing hair cuts and steering listeners to Impressions to avoid a ticket. With sirens in the background, Rivers says, “Her hair was such a disaster, Courtney Love looked at her and said, ‘Sweetie, let me help you.’”

Tierney followed the radio ad with a series of print ads that looked like hair violation tickets. The ads could be clipped out and passed onto friends and family. The tongue-in-cheek violation ordered: “You are hereby summoned to appear at Impressions. Failure to comply will result in snickering, finger pointing, nick-naming, public shaming or, in some cases, viral internet videos.

Although Tierney says she blew her budget on the radio ads, she reaped the benefits of hearing hundreds of people mention the ad. “Our total sales for November and December were up $100,000 and the salon’s new guest count was up 10 percent.”

The Gift of a Spa Experience

After negotiating air time as part of a trade agreement for their part in a radio promotion, Paris Parker and Imaginal Marketing designed this radio spot to mimic the word-of-mouth scenario that attracts clients to a salon. Copy for the ad was inspired by the results of informal focus groups of men and women who expressed anxiety about having to buy the right holiday gift for their significant other. The answer, according to Paris Parker: a spa gift card.

Owner Debra Neill Baker provided the voice for the ad: “Women need and are looking for a few more moments alone to rejuvenate their bodies after a tough day, to soothe frayed emotions, usually so they can take better care of you. When you give the gift of a spa experience, it expresses more thought, more caring. You’re really giving this person that you love an invitation, even permission, to take care of themselves. This is a true gift.”

This ad was created to cut through the noise of radio chatter and speak to thousands of listeners intending to buy a Christmas gift in the near future,” says Neill Baker. “It ran 31 times during the six days leading up to Christmas, and the total investment for the radio campaign was $1,150.” 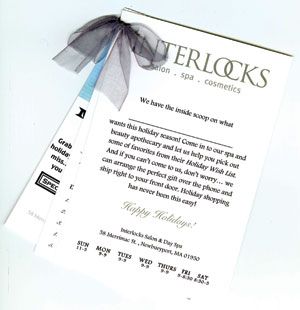 Beauty on a Budget

As a cosmetology school, Eric Fisher Academy’s marketing efforts are split between recruiting for students and for clients. In an effort to attract new clients and promote the student salon and spa, Eric Fisher partnered with Sunflower Broadcast Group to create a television commercial that featured students performing services at the academy. Using the tagline “Do Beauty on a Budget,” the commercial informs viewers that services are offered at a discounted rate and encourages them to check the academy’s website for monthly promotions, packages and coupons. The commercial began running in 2011, and that year ushered in 22,391 clients. Copy for the commercial was written by Alexis Salas, Eric Fisher Academy’s marketing manager, and the producer of the commercials was Eddie Gilmer. 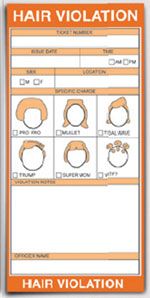 This past holiday season, Interlocks developed a direct mail campaign that ensured target clients got exactly what they wanted for the holidays, while providing a stress-free shopping tool to their spouses. Project Manager Jordan Eramo designed a simple Wish List that was accessible throughout the salon during the month of December. When clients completed their wish lists of products and services, they were mailed to their significant others with a special invitation to the salon’s Men’s Night event, which served hors d’oeuvres and scotch and brandy, offered special discounts and helped men with their shopping. “The men enjoyed stress-free shopping, clients got great gifts, and we enjoyed record-breaking holiday sales!” says Eramo.

Although Impressions creates thousands of postcards each year, Downside #73: “We use clever humor to maintain the message that we are trendy, but comfortable and fun,” says Tierney. “We print about 1,500 cards a month, and place them in new client and donation bags, pass them around town, and use them as thank you cards.” the salon doesn’t mail many. Instead, future professionals are recruited to give them out at community events and gathering places, like the local theatre. With its Downside campaign, the salon designed multiple postcards that showcased the inherent “problems” that come with a great hair style. Your ex could begin calling again. Or, Downside #55: No one will believe you qualify for senior discounts. 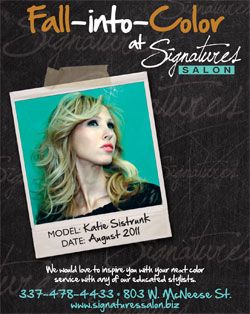 Announcing the 2022 Salons of the Year Finalists

SALON TODAY is proud to announce the 20 finalists in the 2022 Salons of the Year competition.

SALONS OF THE YEAR to Add Best Barbershop Category: Extends Deadline to March 20

Got a handsome new look for your barbershop? Enter it in the 2022 SALONS OF THE YEAR interior design contest and sweep the new Best Barbershop category.

Day 10 of Celebrating the SALON TODAY 200

And just like that, we've now introduced you to the 2022 SALON TODAY 200. Courageous leaders who've steered their beauty-based businesses through one of the toughest times in history, have developed strong cultures that envelop their teams and built bonds of lifelong loyalty with their clients Meet the final group and visit our past days to meet the rest.

On Day 8 of the 2022 SALON TODAY 200, we celebrate the leaders and teams who courageously kept their business strong during the pandemic and are working tirelessly to rebuild. From implementing deskless salons to seeking mental wellness support for their teams, these salons are pivoting to find their new way to success. Here, the Salon Secrets Spa team and their family members enjoy a hay ride in Kennett Square, Pennsylvania.

The teams that learn and play together, stay together. On this 9th Day of meeting the 2022 SALON TODAY 200, we meet salon teams who've lost weight together, started book clubs and helped a local university with a dance charity event.

We're on a roll now, as we introduce you to the next 20 SALON TODAY 200 honorees. From tripling bridal sales to organizing team celebrations and retreats, these salons and spas are infusing joy into their businesses and their sales are growing accordingly. Here, Ryann Halo and the team from Salon Halo in Spring Hill, Florida.

It's Valentine's Day, and the SALON TODAY 200 is our love letter to the industry! Meet 20 more honorees and find out how they've loved on their staff members, their clients and their communities throughout the year. Here, Jenny and Chris Knudsen welcome guests into Mane Attraction Salon in Phoenix, Arizona.

With this Day 5 announcement we've now released 100 of the 2022 SALON TODAY 200! Over the past two years these salons have hustled, from adding curly hair services to the menu to introducing compensation levels where stylists can name their own prices. Their ingenuity have earned them a rightful place on this year's list. Here a stylist consults with a client at Lavish Hair Lounge in Albuquerque, New Mexico.

Day 4 of Celebrating the SALON TODAY 200

In Day 4, we're thrilled to introduce the next 20 honorees of the 2022 SALON TODAY 200. The owners of these salons came ready to lead, and the teams members are eager to delight their clients every day. (Here, the team from Interlocks jump for joy at their reopening.)

In the second day of toasting our 2022 SALON TODAY 200, we meet a group of success-focused salons that recruited new team members, advanced education efforts, expanded services and embraced technology to rebuild their businesses in 2022. Here, the team at Blo in Raleigh, North Carolina, are all hands in with the changes. Meet the next 20 honorees and learn their bright ideas.

Many salons experienced rebuilding and growth in 2021, but it required all departments--guest services, styling, color, spa and leadership--pulling together. Meet the 20 SALON TODAY 200 honorees in our third day of announcements and read about their Herculean efforts. Here, the team from Fine Bella Salon in Avon Lake, Ohio, enjoy a team-bonding beach day.

Over the next 10 business days, we'll thrilled to introduce you to the 2022 Class of the SALON TODAY 200. From evaluating team members on a culture score to studying and embracing individual learning styles, these SALON TODAY 200 honorees rallied their teams to success. Meet the first 20 honorees and see their best practice tips. (Here, Bonnie Conte shows off the new team T-shirts for Avalon Salon Spa in Lake Zurich, Illinois.)

The 2022 Salons of the Year Application is Live!

If you launched a gorgeous new salon or gorgeously renovated an existing space in the past two years, show off your new look in the 2022 Salons of the Year! Apply by March 10.

The essay portion of the SALON TODAY 200 application tends to give applicants the most anxiety. But your thought process may be making it more stressful than it needs to be. Find out what the judges are looking for, and how you can write a stronger essay.

Six students will receive partial tuition to help them complete their beauty education.