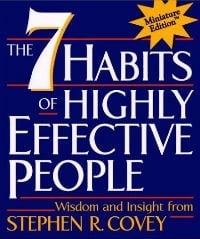 Stephen R. Cover, who authored best-selling book, The 7 Habits of Highly Effective People, passed away Monday in Idaho at the age of 79. His books and seminars, which were a blend of self-help and management theory, were respected by business leaders and entrepreneurs around the world, including many salon owners, stylists and beauty professionals.

“He was instrumental in my personal growth and shaped the framework of how I work,” says Melanie Koroyan-Kopeiki, founder of boutique distributor People in Beauty and a trained Covey facilitator. “The first Covey quote that came to mind today was ‘seek first to understand, then be understood.’ He went on to quote an old American Indian credo—‘listen with the eyes for the heart.’ What a loss, what a legacy, and what a blessing he was to me.”

According to Debra Lund, a spokeperson for the Utah-based FranklinCovey leadership training and consulting company Covey co-founded, he succumbed to complications from injuries sustained in a bicycle accident that occurred three months ago.

Covey became a household name in 1989 when The 7 Habits of Highly Effective People was published. According to his website, the book sold more than 20 million copies in 38 languages, and had four additional titles sold more than 1 million books each. He launched a multi-million dollar empire including audiotapes, training seminar and organizing aids for improving personal productivity and professional success.

Calling Mr. Covey a “human-potential guru,” Time magazine named him to its list of the 25 most influential people in 1996.

Covey’s clients included three-quarters of Fortune 500 companies and scores of schools and government entities. He also trained three dozen heads of state, including the presidents of Columbia and South Korea, Bill Clinton and Newt Gingrich.

His philosophy was based on seven ‘unchanging principles’ or habits that emphasize traits such as taking personal responsibility, having a road map or mission, and defining one’s priorities.

"Many of us at Neill Corporation attended Covey's seminars and incorporated his thinking into our business. His work inspired us to articulate our corporate vlaues and allow those values to guide our decision-making process as we expressed and demonstrated who we were and who we wanted to be as a company! All business development and growth is sourced in personal and leadership development—that became our mantra. Serious Business came out of Neill Quality College, our corporate learning program designed by and for salon owners. The awareness and need for developing the whole person (salon business person) was made more apparent by the like of Stephen Covey who was among one of our greatest influencers. He changed our thinking permanently!"—Debra Neill, Neill Corporation

"Begin with the end in mind! That has been a habit I picked up and use to this day as a result of Stephen Covey."—Leon Alexander, Eurisko

"I had the book and did the seminars and they helped a lot! And, we used it with our people at Maly's as well."—John Maly, Mirabella Beauty

"When I first began on my mission to change my life and turn it around, I took up reading. One of the very first self-help, psychology books I got was '7 Habits' and I loved it, and began to put some of it into my everyday routine. It sure helped, and it provided the discipline to do more and be more productive. A year or so later I began to incorporate some of the information into my salon programs. Of course, I had to change it up a little. It is a rigid book, and can seem a little scary to try to do all of that all of the time. So, I tried to make it humorous. Then, I met Stephen Covey at a seminar and I shared with him that he should see me do his stuff. Not the right thing to share with Dr. Covey. I have a photo of the two of usat that moment, and he is looking at me like I have two heads. I don't think he looked at me again for the rest of the two days. That was the moment Dr. Covey taught me another lesson—when to share and when to keep things to yourself."—Geno Stampora, Stampora Consulting

"How sad, what a loss. The insight I have gained and maintained is insurmountable. Thank you!"—Stayce Pavey