There's nothing quite like a 15-year-old, eager to get her driver's permit, to make you face what you dread most. My daughter had listened to my tales of the crabby, automated DMV droids and on our way there, she stated, "I'm going to be so happy and pleasant, they simply won't be able to be rude to me!"

"Good luck with that," I muttered.

When we arrived, a very familiar face greeted us by giving us our line number. "I'm trying to get my driver's permit today!" bubbled my daughter.

"OK, you'll need to fill out this form," said the agent, just as expected. But, then he added, "I wish you luck."

"Thanks!" she exclaimed. Internally, I thought, "Hmm, that's interesting."

We waited exactly 94 minutes until our number was called. But, I have to admit it was even hard for me to get too grumpy about it because she was so excited the whole time. As we approached the designated window, a very pretty agent in a cheerful blue top and a petite nose ring smiled at us.

"I'm here to get my California driver's license," I stated, as I handed over my Georgia license, my birth certificate and my marriage certificate.

"And, I'm finally 15 and a half, and I'm here to take my test for a permit," giggled my daughter.

"Oh, isn't that exciting!" the agent sincerely gushed. She took our forms and started tapping on her computer. She quickly discovered that I had what she referred to as an "X" file. Apparently, when I got a speeding ticket last year, the state of California perceived me as an out-of-state alien and started an X file on me. Our agent explained I simply needed to fill out an additional form, stating I was aware of this X file, and that it was indeed me. I started trying to explain why I'd been negligent in coming in, but she cut me off, by saying, "Don't worry. No judgment on my part."

At about that time, a young blonde man approached the counter and elbowed us over. "You called my number when I was in the bathroom and I didn't hear you," he told the agent, as he glared at my daughter and myself.

"I'm sorry about that," the agent said. "If you look at the television screens, you can see I called you three separate times. But don't worry, I'll be happy to help you as soon as I'm finished with these customers." He quieted his grumbling, but he didn't leave.

She continued processing our paperwork, guiding us through our eye exams, and explaining where we needed to head for the written tests.

When an agent a few windows down opened up, the disgruntled man jumped over there and exclaimed, "She called my number when I was in the bathroom and I didn't hear it and now she's helping someone else -- I want to be waited on now," he said.

Overheading this, my agent exclaimed, "Sir, I told you I would be happy to help you, and as you can see, I've started with these customers. But you don't have to get back in line, I'll take you as soon as I'm finished."

The customer avoided eye contact, telling the other agent, "She was very rude to me. I want to speak to a manager."

And, that's when I saw it-the very human interaction between the DMV droids. An agent to the other side of my agent simply touched her hand and whispered, "Breathe in, breathe out!"

Suddenly, I found myself experiencing the DMV from the other side of the counter. Maybe the agents weren't the automated, unemotional robots I'd always believed. Perhaps, they simply had very difficult jobs dealing with unending lines of unappreciative, difficult and disagreeable people.

I began wondering if a portion of the DMV's abysmal customer service image rested firmly on the shoulders of the customers themselves. Yes, the lines are long, and the bureaucracy is frustrating to the best of us. But is it humanly possible to be pleasant to customers when day after day people are rude to you?

Now, turn that around and think of the clients in your own salon or spa. Yes, you'll occasionally experience the absolutely-impossible-to-please client or the client who wants to sit in your chair and complain about how hard her life is. But, for the most part, your clients are eager to see you, excited about the salon or spa experience, and they leave feeling prettier and better about themselves. If customer service truly is a give-and-take human experiment between the service provider and client, it really shouldn't be that difficult to exude superior customer service skills to your average client. At least, you have it easier than the overwhelmingly unappreciated people who staff the DMV.

Getting back to my day at the DMV, my daughter and I proceeded to the testing area. As yet another pleasant person took our pictures and administered our tests, she expressed to my daughter, "Look how fabulous you did, you only missed one question! Your mom did well too--she just missed two."

As we departed, our original agent caught my eye. "Did you both pass?" she asked. When I nodded yes, she gave us a wink.

And, then my daughter (who's always been a bigger person than me) taught me a final lesson in appreciation, exclaiming loud enough for everyone to hear. "Mom, you were so wrong. Everyone here has been soooo nice!"

What's your best and worst customer service experiences as both a customer and as the service provider? What role do you play in making it a good or bad experience? 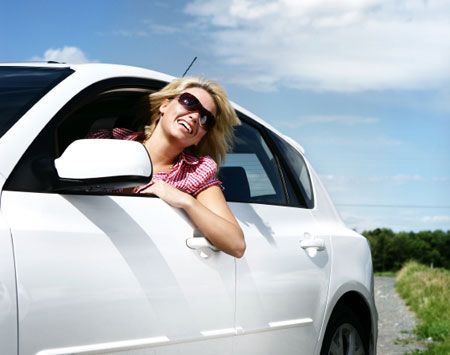