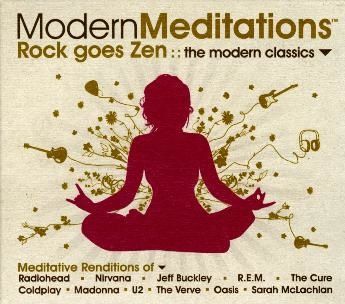 If the earthy new age music flowing from your spa's sound speakers seems too far a departure from the tunes that are rocking your salon, now there's a new option. Released in November, the Modern Meditations series Rock Classics and Modern Classics feature 12-track meditative renditions of some of rock music's best-known and most beloved songs. Also available is an album dedicated to the songs of The Beatles. Aimed at introducing a brand new, modern rock perspective on "new age" music fare, the Modern Meditations series will be available for purchase at all traditional music retail outlets and online services, as well as distributed to many high-end lifestyle retailers.

Featuring the work of renowned producers from across the globe, Modern Meditations has transformed contemporary rock favorites into meditation music for the rock 'n' roll generation. Shimmering rock guitars and warm percussion create lush instrumental soundscapes. While yoga, Pilates, and meditation have all entered the mainstream, the music has not. The "Modern Meditations" series aims to introduce an alternative to traditional new age fare to a growing modern rock audience.

The first of two compilations releases, Rock Classics features serene instrumental versions from class rock artists, including Bob Dylan, The Beatles, The Rolling Stones, The Police, Led Zeppelin and more. Modern Classics dives into the contemporary rock catalog with tranquil renditions of songs by The Verve, U2, The Cure, Oasis, R.E.M. and Nirvana.