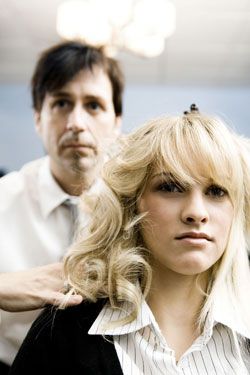 Finding the best outlet for freshly snapped photos might seem daunting, but industry veterans seem to have it down to a science. Frequently the first marketing slot that gets filled is art for the Yellow Pages or a local newspaper ad. Next, owners tend to apply the images to the salon menu and business collateral such as letterhead, business cards and the website. Posters are another idea for in-salon marketing. Frank Shortino, owner of Shortino's Salon & Spa in York, Pennsylvania, does it all.

"We blow up the photos and hang them in our windows," he says. "We put them on our menus. We'll go to a local chamber of commerce event and show some before-and-afters. That always brings people in the door."

Charlie Price, owner of Click Salon in Denver, Colorado, echoes this approach. He recommends, "In any communication with clients-an invitation to a special event, an announcement that a stylist has been promoted-use those photos as your collection for the season." Through consistency of image, clients will relate your brand to that look. "We change the big photos in our salon every eight months. I think clients realize that an avant-garde style is a piece of art. Mailers, brochures and ads should probably be more commercial."

Shortino posts images at his salon's site, www.shortinos.com, under a tab marked "Gallery." Price, this year's NAHA Hairdresser of the Year, as well as a 2008 contestant on Bravo TV's Shear Genius series, keeps his freelance endeavors separate from his salon business by devoting www.charliepricehair.com wholly to images. Alan Ruiz, owner of two Jackson Ruiz salons in Austin, Texas, shows rotating images on his homepage and also uses the photos to fill a portfolio that he leaves out for his clients to thumb through. This adds to the salon's credibility, he says, which promotes client retention and referrals.

You may believe that magazines are beyond your reach, but according to Shortino, just the opposite is the case. "Get to know your local magazines and choose some national hair magazines, too," he suggests. "Call or e-mail the editors and tell them you'll be sending them some material. Unless it's really terrible, they're going to use it. After a while, they'll start calling you."

Although Shortino recommends using shoots "to market your inside, your staff," he does not market stylists individually. "All of our shoots list â€˜Shortino Salon' or â€˜Shortino Salon Styling Team' in the credits, not the name of the stylist," he explains. "We try to keep it a team."

It also drives home the fact that while you're willing to invest in your staff's artistic growth, you are still running a business.

"Some of our stylists get local editorial work, and we ask the publication to list the stylist's name as well as the name of our salon," says Ruiz, who has been doing photo shoots with his team for about a decade and still enjoys assisting in shoots for other hairdresser friends. "Typically these shoots take place during a workday, so I have to let them out of the salon, but giving us credit makes up for that. We act as a sort of agency and permit stylists to use the pictures for their own portfolios."

In Los Angeles, where images on film and in print almost replace reality, the very nature of a hair shot is seductive and recruits even more effectively than hair seen in person, maintains California hair photographer Steven Barston (www.stevenbarston.com). "Hair done on a client in a three-dimensional world is not the same as hair done on a model in two-dimensional print," he says. "Out here, this is the kind of thing that gets salons more business."

"The photo shoot should be fun!" Shortino adds. "It should be about what you want and who you want to be." 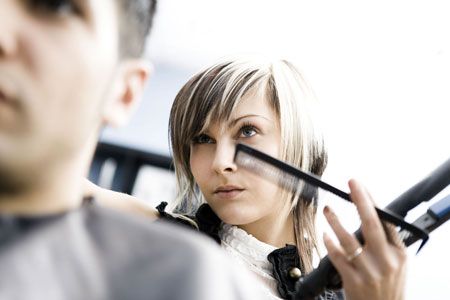 Linger by the magazine racks of any large drugstore chain, and you'll discover an abundance of consumer publications that may welcome your photo submissions. They include:

Living in L.A., photographer Steven Barston thought he could spot a celebrity when he saw one. He didn't understand what was happening when the salon he shoots tests with, Hairroin Salon in Hollywood, California, brought him to a "celebrity" shoot where he didn't recognize anyone.

"It turns out they were Internet and MySpace celebrities," Barston recalls, "I was saying, â€˜Who are these people?' But their sites get so many hits! People were coming into the salon just because these â€˜celebrities' posted on their MySpace page that they got their hair done there."

Look around your town; an online personality may be available for a photo shoot!

If you want to learn how to produce your own photoshoot, read Camera Ready by Rosanne Ullman.