As SALON TODAY celebrates its silver anniversary, we take a look back at the topics that have defined salon and spa owners' businesses. 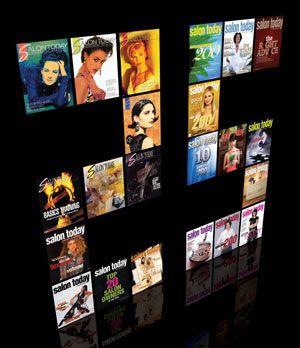 Toot, toot! That's just the sound of us tooting our own horn, celebrating the 25th anniversary of SALON TODAY. We don't normally congratulate ourselves, at least not publicly, but such a significant occasion calls for us to drop the modesty. Kudos to all!

And by all, we mean you. Our salon and spa owner and manager readers have shared with us-and, by so doing, with each other-their most closely held secrets to success, their embarrassing anecdotes, their hopes and dreams for the future. How to push past the 7-percent profit industry average? Our readers spill all of their ideas with no thought to the competition down the block stealing their thunder. That humiliating mass staff walkout? Obviously not too mortifying to dish about it. The joy of watching your adult children jump into the family business? We were there for that moving moment, too.

Relying on salon professionals as many of the expert sources for articles has proven to be the easiest part of producing each monthly SALON TODAY issue. The generosity of salon and spa professionals outpaces that of any other industry. We not only stand by that statement, but extend it beyond the industry to local communities and, indeed, throughout the world. In fact, we've devoted several issues to the industry's numerous and multifaceted philanthropic efforts. The remainder have reported on every aspect of salon operations, from big-picture topics like industry surveys and the dawn of the day spa to the smallest details of software innovations and decor trends.

The concept for a management journal originated with industry icon Howard Hafetz, president of the Raylon Corporation distributorship. As he toured the country conducting business classes for salon professionals, Hafetz saw the need for a national magazine that addressed a broad range of business topics related to running a salon. In 1983, he and wife, Vickie launched SALON TODAY.

When SALON TODAY was 10 years old, Vance Publishing acquired it as a sister publication to MODERN SALON. In the hands of first editor Michele Musgrove, who is now associate publisher of the company's multi-media salon division, the new journal thrived, growing along with the industry it covered. In 1999, the formerly bi-monthly magazine went monthly; by 2000, SALON TODAY had racked up three ABBIES, the salon industry's award program honoring exceptional reporting. We were the first publication to place salon owners on our covers and early to establish an online presence to offer access to complete articles. In September 2004, a larger, redesigned SALON TODAY emerged with updated graphics and refocused editorial.

The early 1990s marked a pivotal time for the industry, as salons were just getting their feet wet in day spa services. Was this a fad, or would salons be permanently redefined? SALON TODAY did the research, talked to industry consultants and conducted original surveys in order to fully explore the industry's expanding potential. Also notable during this era, the establishment of The Salon Association (TSA) served independent salon owners with education, publicity and legislative activity. SALON TODAY and TSA co-sponsored annual Symposiums for this new breed of salon owner-talented and committed professionals who took themselves seriously not only as a creative force, but as businesspeople. TSA also laid the groundwork for the formation of the current Professional Beauty Association (PBA), while the success of Symposium set the stage for the 2006 launch of the annual SALON TODAY 360Â°, two days of intense business education and networking.

For many readers, a highly anticipated event each year is the arrival of the January issue, when we reveal the "SALON TODAY 200." This list of the 200 salons that have experienced the most growth during the previous year debuted in 1998 and has been a popular fixture in the salon industry ever since. Organized into multiple profit categories, the detailed roster lets owners peek through the windows and into the files of lightning-growth salons to learn not only their earnings but also their expenditures, service prices, square footage, staff breakdown, redesign dates and, often most revealing, owners' comments and tips.

We continue to receive mailbags of applications from owners aspiring to see their salons' names among the ST 200, and not only for the heady honor of it all. In recent years, owners have discovered the power of leveraging this type of industry recognition for their marketing purposes, hanging the framed certificate and mentioning the award in their print advertising and "hold" phone messages.

Equally sought-after, the "Salons of the Year" issue marks our nod to gorgeous decor, with new and redesigned salons competing to be named among the elite 20 Salons of the Year in our June issue. SALON TODAY took over this award program from MODERN SALON in 2002 and added business information about each winning salon.

Other special issues through the years have included our annual technology issue, a look at salon software and other digital initiatives in the beauty industry, and several "power planners" that each laid out a full year's calendar of must-dos and should-dos for the conscientious salon owner.

Signs of the Times

Like any dynamic publication, SALON TODAY stands always prepared to react to current events. After 9/11, we shared our readers' stories of tragedy and amazing community outreach efforts, addressed new security concerns and then, together, regrouped to forge ahead and determine clients' new needs upon their collective loss of innocence. In lighter times, we published what became a huge favorite: the February 2005 issue that explored hairdressers' increasing "star power" and landed Bravo TV "Blow Out" star Jonathan Antin on the cover.

In the most recent years, the rapid evolution of both spa and technology have kept us on our toes. With an annual issue devoted to each, readers have stayed informed about the latest developments that have swept salons into the simultaneously high-tech and high-touch 21st century.

It was only a decade ago that our "Salon Automation Issue" introduced the revolutionary concept that every salon should implement a comprehensive business software system. Since then SALON TODAY has periodically included a software directory as we've reported on the latest in phone systems, chronicled the salon debut of pre-Blackberry Palm Pilots, viewed the in-salon installation of screens large and small and described the latest product and equipment advances.

Treading salon's new spa ground, our March 2000 "Strengthen Your Spa" issue sought to help spas solve their tenuous profitability equation by expanding retail, tightening overhead and payroll and generating sales of gift cards, still called gift "certificates." This also was the issue that foreshadowed the medispa boom with an article, "Partnering with Physicians."

Yet for all of the antiquated language and quaint naivete, so many solid business principles that applied then still endure today. Exceed the expectations of your clients. Get the most profit out of every square foot. Focus on client retention and maximizing every ticket as much as on new client recruitment. Serve as a role model of ethical and transparent behavior. Make it easy for your staff to pursue continuing education. Track every aspect of your business.

"SALON TODAY has always been about helping individual owners to set benchmarks for themselves and grow to the next level," says contributing writer Stacey Soble, who was the magazine's editor from 1999 to 2003. "In the business world, growth is the way you measure your success-growth of sales, locations and employees. Owners who want to stay small but profitable read SALON TODAY to gain ideas for being more efficient, carving out time for themselves or getting more recognition. That's a different type of growth. Maybe you'll get that new software system not in order to market yourself and grow sales but, rather, so you don't have to spend all weekend doing payroll."

SALON TODAY doesn't want to miss a minute of the bright future on the salon/spa horizon. "I see SALON TODAY continuing to adapt our themes to whatever is relevant in salon and spa owners' lives," forecasts current editor Laurel Smoke. "For example, we'll report more about the environment and â€˜green' topics. We'll tackle economic realities in a time when you must give clients a good reason to use their gas to drive to your location. We'll help spas handle an increasingly global society as they welcome traveling guests who drop in not every week but, perhaps, twice a year."

SALON TODAY frequently receives feedback from readers who have been named their local community's "businessperson of the year" or whose salon has topped their city's "best of" list. It's heartening, and it's humbling.

"That's our goal," says Smoke. "We want our readers to have the most sophisticated management practices, best-trained staff, most up-to-date decor, highest level of customer service, most effective marketing and prettiest retail displays."

For 25 years now, our readers' accomplishments have demonstrated that we're hitting our target, and those successes are all the gratification we've needed. Well, almost all. Toot, toot!