It wasn’t that the room was noisy; it was just that Coral Trujillo couldn’t believe her ears. Had her student really just said $10,000? But Michelle Cappo, cosmetology student and survivor of childhood cancer, really was suggesting Trujillo’s school - Career Academy of Beauty – set the target for its first ever fundraiser at $10,000. Trujillo had thought herself ambitious suggesting $2,000. Six years later, they are raising more than twice that amount and so, with its next St Baldrick’s charity day approaching this March, she is a little more relaxed about it.

“When Michelle told us about St Baldrick’s Foundation, asking if we could do a fundraiser, I was really interested,” says Trujillo, career consultant at the family-owned and run school in Garden Grove, Orange County. “It’s an amazing, volunteer-driven charity that funds more childhood cancer research grants than any organization except the US government.  But, wow!  I was a bit stunned when she suggested $10,000.”

CAofB is an ambitious school, expecting a lot of its students and its trainers. Because it’s a Nuts & Bolts school, the students learn more than just technical skills training, they also learn how to talk to clients, how to direct conversations in specific ways and how to build their own confidence so once they have maneuverered the conversation around to the fundraiser, they are perfectly capable of asking for a donation or a willing participant. And they need a lot of confidence because it’s a big ask; the fundraiser is about getting as many people to shave their heads as possible. 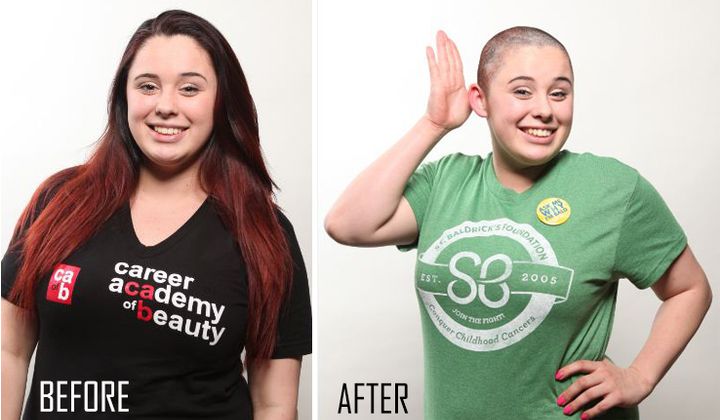 To Trujillo’s relief, in the first year, its charity day attracted much support both in number of heads to shave and funds, easily surpassing its $10,000 target. Since then, the event has grown and grown. Last March was the fifth year and the target was set at $15,000. Among many others, guys from the local fire department and half the high school’s soccer team submitted to the clippers. It was an astounding success; the students and teachers raised a staggering $21,400.

Firemen from the Garden Grove Fire Department stop by for a quick head shave.

This March, the school is determined to raise even more while attempting to win a place in the Guinness Book of World records for the most simultaneous head shaves ever. The fire department and the entire soccer team will submit once again.

‘Our local TV station covers the event but we need to give them something special, something different to get them along each year. This time we are going to shave 250 heads at the same time,’ explains Trujillo, who is also deep in discussions with businesses to garner corporate sponsorship. ‘They will feature it throughout the day on the channel to encourage viewers to come on down to join in and to donate.’

Such coverage clearly has benefits for the school, raising its profile among potential students and guests. In November last year the school received a call from a young woman asking if it was the school that did the head shave. She had been calling around all the schools in the OC area for the previous eight months to track them down as she wanted to study with them and no one else.

But the fundraiser has far greater benefits. The whole event provides a useful learning curve for the students. They are directly involved each year, not just in organizing it but also coming up with innovative ideas to promote it in the run-up to March 18. They also get to be part of something amazing.