For Mother’s Day, TeddieKossof launched a campaign that encouraged gift card sales, while sharing ‘amazing mom’ stories from its guests. With the tagline, “She taught you about True Beauty,” the Facebook campaign invited fans to share stories about their mothers, and each time a story received a ‘like’ it earned the guest one entry in a drawing for a full day of salon and spa services.

“The campaign launched 2.5 weeks before Mother’s Day with in-store signage and an update to our website and Facebook page,” says TeddieKossof. “We also sent two e-blasts to motivate our email fans to also become Facebook fans. Daily Facebook posts encouraged fans and their friends to join the contest.”

Over the campaign, the salon’s Facebook page gained 76 new fans, seven times its average fan growth, and huge spikes in Facebook traffic, with unique page views 13 times the normal daily average. “We also saw a 25 percent increase in gift card sales over the previous year,” reports Kossof. “It was so successful that we repeated a similar contest for Father’s Day.” 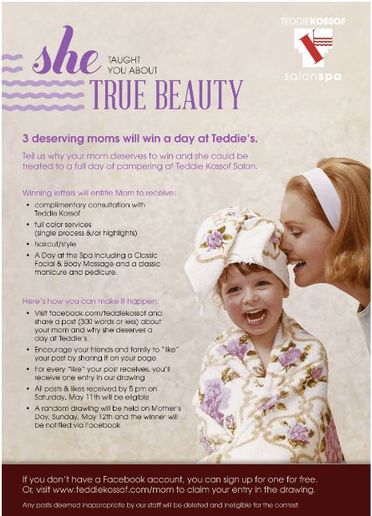