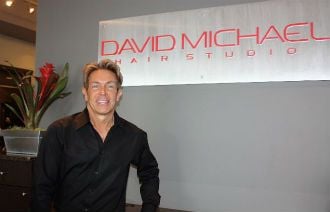 Over the last few years, "the economy” has been the response to all problems posed by most salon owners. It seemed to be the easiest non-tangible disturbance to point a finger at.  Why though, did some salons never have to point that finger?

David Michael Hair Studio owner David DeGraw is a true-to-life example of an owner who not only opened during the period of what many others experienced as their fall, but had growth in every sector of his business and received numerous accolades for his success in the New Jersey market.  DeGraw’s success is in direct correlation to three key principles he has never deviated from and which have helped him build and expand, over the course of three years, into one of New Jersey's most successful salons:

Do you really want that book?
"Focus on your staff who stay true to your beliefs right from the start.  As tempting as it might be to do otherwise, you must surround yourself only with people who share your vision," says DeGraw.

Outlined structure.
"Plans are great, but if the staff and entire company do not visualize the salon’s blueprint for success and their opportunities for growth, they are only the hopes of an owner and not an actual road map to prosperity to be shared by the group."

Who says we can’t be the Ritz Carlton?!
"The greatest compliment is a client’s referral of a new guest.  Loyalty is earned not only through beautiful hair but also by a memorable impression of customer appreciation all day, every day."

David DeGraw has embraced these three key building blocks as a successful foundation for his continuous growth. No finger pointing needed or wanted here!

The American Customer Satisfaction Index rates everything from the convenience of store hours to speed of checkout process on a scale of 0-100.

“The technology within the industry is improving at an accelerated pace, making less invasive options with little to no downtime more accessible and enticing."