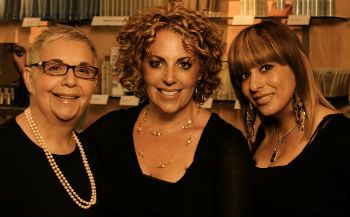 Davis firmly established her culture as she and her mother Carol opened their first Gila Rut Salon in the hip neighborhood of Hillcrest in San Diego, California, in 1992. “The goal was to create an environment where the staff would flourish and the guests would receive the ‘ultimate salon experience,’ says Davis. 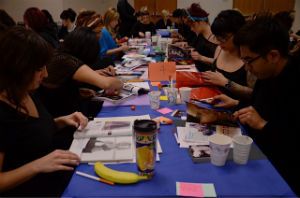 By 2004, the salon had established a reputation a progressive salon with an intense focus on education and more than 10,000 happy guests, as well as an accolade of press mentions and a half dozen SALON TODAY 200 honors. In 2006, Davis was ready to expand and partnered with Karla Lopez-Martinez to open Gila Rut’s second location. In 2010, Gila Rut opened a third location, and this past summer it captured the coveted the NAHA Masters of Business Award.

While Davis continued to believe the salon company she founded had a strong culture, championing that culture on a daily basis throughout three locations became more and more challenging. “When you have one location, it’s easy to keep your finger on everything, but as you get bigger, if you’re not careful, your culture can get diluted,” she says. “We had a written mission statement, but decided it was time to put the culture in writing. And, we started with our core values.”

Get It in Writing

Both Davis and her business partner Lopez-Martinez had an idea of what Gila Rut’s core values were, but they’d never actually been stated. So they both took some time individually and wrote down words that represented what they believed were the salon company’s core values. “Then we sat down together and talked through both of our lists and morphed them together to come up with three core values,” remembers Davis. 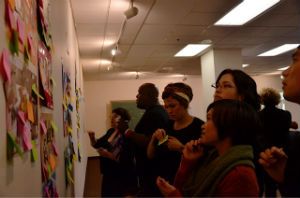 Next, Davis and Lopez-Martinez met with their management team. “We asked them to make a laundry list of all the things Gila Rut is all about from the education to the coaching to the customer service, etc,” says Davis. “Then in a deep discussion, we peeled back the meaning on each of those until we arrived at an agreement on the three core values that reflected the heart and soul of who we thought we were.”

At the end of that exercise, the management team had three core values: Commitment, Growth and Communication. But Davis knew it wasn’t enough to simply present the values to her staff. “From my earliest days of opening the salon, I remember Winn Claybaugh teaching, ‘People support what they help to create,’” says Davis. “To get their buy-in, we needed to engage them in an activity of discovering the core values for themselves and helping create what they actually mean for the everyday operation of our business.”

At the next staff gathering, Davis brought stacks of magazines and glue sticks and gave each staff member an 11 x 14 inch sheet of paper. On one side of the paper, she asked each staff member to secretly write the one word he or she thought summed up Gila Rut as a company. On the other side of the paper, the staff members were told to create a collage of cut-out images, drawings or words (as long as it wasn’t the word on the back of the card) that helped communicate their words.

The staff members were  divided into 10 groups and each group hung their finished collages together on the wall of the room. “Then, as if they were in a museum of art, each group ‘curated’ another group’s collages. They were given Post-It notes, and asked to guess the word they thought the artist was trying to convey and put it next to the collage,” explains Davis. “Then we did a debrief.  Some were way off and others were spot on. But now we had their interest, and we started to talk about their values, and what they thought Gila Rut’s values were. It ended up they were right in alignment with the same three values we had established.”

Carrying Out the Culture

Once the entire staff was in agreement with Gila Rut’s three core values of Commitment, Growth and Communication, Davis challenged the entire team to come up with the rules to live by. “I told them to look at Gila Rut as a garden. What are the 10 non-negotiable behaviors that we need to fertilize our garden and help it grow? And, what are the 10 non-negotiable behaviors that are weeds--that threaten to take over our garden if we allow them to happen?”

The team came up with a list of what they call the 10 Cultural Commandments (although there actually are actually 20—10 positive behaviors that fertilize the Gila Rut garden and 10 negative weeds that pollute it). “They were a little more hardcore than I would be,” laughs Davis. “I actually softened them a bit when I wrote them down.”

The written commandments gave Gila Rut something tangible. Davis had them designed on a poster with the three core values, and hung the posters in the breakrooms of each location.  “It’s a very easy tool to coach with—if someone breaks one of the commandments, it’s easy for me to say, ‘These are the rules that you all came up with and agreed to, I didn’t come up with these, you did. Let’s take a look at your list.’”

But Davis did find her management team needed some help enforcing the new cultural commandments day in and day out. “What we discovered was our educators are a little Gestapo on Mondays when they are teaching classes, they really whip the kids into shape,” says Davis. “But on Tuesdays, they change hats, become regular employees and become irritated and simply complain about behaviors they see and don't like.”

Davis was surprised to learn that her educators didn’t feel empowered to carry out the cultural commandments throughout the week, so in a staff meeting she made a big deal about introducing each one of them to the staff as the new cultural ambassadors and charged them with carrying out the salon’s cultural commandments. She backed that up with additional coaching and role-playing so the ambassadors were armed withthe  right verbiage and felt prepared to mentor staff members from a perspective that was supportive and helped employees get back on track.

As Davis has taught her culture class to owners across the country and observed as they’ve made up their own cultural commandments with their own teams, she’s observed that they are usually very close to the ones her own salon developed. “I believe that most people wake up in the morning wanting to do good, and if you ask people to give you a list of what they should be doing, they know what’s right and what’s wrong,” she says. “But it’s an empowering to your team when you allow them to self-manage and to make great decisions for themselves.”