In 2012, the competition that celebrates salon business success is celebrating its own milestone, as this year marks the 15th anniversary of the SALON TODAY 200. Before we look forward at this year’s honorees, we want to take you back for a look at the competition’s history: 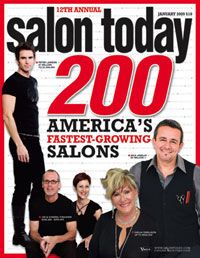 SALON TODAY was a fairly new title in Vance Publishing’s arsenal and then Editor in Chief Michele Musgrove was proud of the momentum that she’d built with the only trade magazine focusing on salon business. In January, she’d created quite a buzz with an issue that focused on the “Top 20 Salon Owners of the Year.” Readers seemed to be hungry for more peer-topeer business success stories.

“At the time, there still was a void of hard numbers— of true benchmarking—and I started to think about how we could gather that information in a useful and meaningful way,” remembers Musgrove. “It also was the era of publications like Fast Company which were focused on fast-growing businesses and new industry initiatives, such as The Salon Association, which was proving that good things happen when salon owners got together and shared ideas.”

It was a bold idea to consider that salon owners would share their financials and compare their growth rates. Bold, because many people at the time, including Musgrove’s own publisher and many manufacturers who sponsored the magazine, told her salon owners would never open up their books and reveal their annual revenues. “But it also was a time when there was a shift in spirit—hair color was booming and many salons were venturing into the spa world, and money was coming in a little bit easier,” she says. “Owners were beginning to realize if they really wanted to take their businesses to next level, they needed to focus on more than just technique, they needed good business fundamentals.”

So, Musgrove designed the application, began promoting the program and held her breath. And, in a fashion that isn’t any different than it is today, nothing appeared in her IN-box until after the final date when applications had to be postmarked passed—then the applications poured in. Musgrove’s gamble paid off, and the SALON TODAY 200 was born. 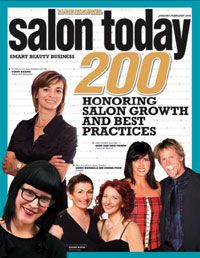 After its first year, the SALON TODAY 200 found its legs, which is evident by its ‘America’s Hottest Salons’ theme that year. Confident that she could get salons to reveal their numbers, Musgrove now asked them fro verification with tax documentation.

In 1999, SALON TODAY was invited to toast the honorees at a champagne reception held at the very first The Salon Association’s Symposium held in Scottsdale, Arizona, and many of the honorees attended the event. The SALON TODAY staff brought 300 copies of the issue to the reception and were amazed when they disappeared in minutes.

A sign of the times, 2000 marked the first year SALON TODAY asked salons to include their website address. That year, 77 of the 200, had websites—Today, it’s incredibly rare to find a salon in the list that doesn’t have one.

That June, SALON TODAY partnered with Cosmetologists Chicago for ThinkFast, the first live salon business event that focused on the SALON TODAY 200. More than 150 people attended the twoday event.

The cover of this funky model on the bright orange background was shot in Los Angeles by photographer Bill Knapp on September 10, 2001. Then Editor in Chief Stacey Soble was on location for the shoot and stayed on for a spa conference, which started the next day, 9/11. “There were hundreds of spa owners at the event and we were stranded for almost a week at the Disneyland Resort. It was surreal, since Disneyland was supposed to be the happiest place on earth. No one really wanted to discuss spa business, but none of us could get home,” Soble remembers. “Every time I see this cover, I think of that experience and of the events of 9/11.”

During a depressing time in our nation’s history, this issue attempted to brighten the perspective by focusing on salon owner’s bright business ideas and handing out SALON TODAY 200 sunglasses at Symposium with the issues.

In March of 2006, the newly appointed editor of SALON TODAY, Laurel Smoke (now Nelson), once again created a live event based on the SALON TODAY 200. Bill Rancic, the first winner of The Apprentice was the keynote speaker for the first SALON TODAY 360°: From the Page to the Stage, held at the Intercontinental Hotel in Chicago. SALON TODAY 360 had a successful threeyear run until a troubled economy made salon owners hesitant to travel for business events.

For the first time, SALON TODAY let the readers pick the cover. “Online contests were growing in popularity and I though inviting readers to pick the cover of the SALON TODAY 200 would create some excitement for our new website,” says Nelson. She directed the photographer to shoot three different cover options with the same model in different looks. Readers voted on salontoday.com, and this was the winning cover.

Shortly after returning to the helm of SALON TODAY, Editor in Chief Stacey Soble decided to change the cover focus of the ST200 issue for 2009 by featuring the honorees themselves. The decision made the cover layout more challenging for Graphic Designer Himanshu Suthar, but proved to be a popular decision with readers.

As the world of business shifted its attention away from fast growth and a troubled economy created sluggish sales for salons, SALON TODAY 200 responded by shifting the focus of the competition (which was on growth) to include 10 additional best management practices. That decision leveled the playing field for salons of all sizes and encouraged salon owners to share even more great business-building ideas in a wide variety of topics.