An electrical fire, an errant spark, arson-fire may devastate a salon's structure in minutes, but it doesn't have to devastate the business. With an action plan and a strong management team, a business will carry on, despite the challenges. 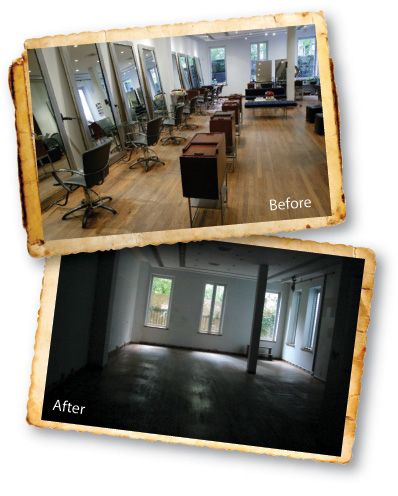 Five-Alarm
Things were a little different for Eva Scrivo's salon (evascrivosalon.com) on Hudson Street, in New York City. Eva and her husband, Arik, had opened the salon six years ago, growing at a rate of 40 percent a year-even expanding out into two salons.

At 5 p.m. on Friday, April 18, 2008, a client came into the salon after it was recommended for relaxation by his hotel. "He came in to get a facial," Eva says. Within 30 minutes, he was running out of the salon because of a five-alarm fire.
"We were first notified from the fire department, who said there was a roof fire, caused from a spark from an air conditioner, they were going to put it out and not to be alarmed," Eva says. "One minute later, the firemen were coming in through the windows screaming, â€˜Everyone get out!'"

The 1,400-square-foot roof deck of the four-story brick building on Hudson Street-completely burst into flames. The entire salon, had to evacuate. Everyone, including clients with foils, were jumping into cabs, heading over to the Bond Street location.

When Arik Scrivo and the fire chief first entered the building, he saw a few spots where water was trickling in. "I said, â€˜Oh, well, the water damage doesn't look too bad.' The chief responded â€˜Well, it's going to get a lot worse.' Within about 15 minutes, the salon was flooding with water. "And it just got worse and worse."

Meanwhile, the Bond Street location, looked like a refuge scene, with one cab after another pulling up filled with clients and stylists. "As soon as the stylists got there with their clients, they were running into the back of the salon, rushing them to the sinks to rinse out their hair color," Eva says.

Insurance
In context, Arik says, the property damage was relatively small, 80-90 percent of the money owed to the business is because of business interruption. For the Scrivos, they had staff for two salons, Hudson Street and Bond Street: Bond Street had just opened five days prior to the fire, and they had advertisements out to hire more staff. Because of the fire and the displaced stylists, they should be reimbursed for the ads taken out to hire more people.

Every insurance company has its own adjuster-who will try to create a damage estimate favorable to the insurance company, Arik says. "If the business owner doesn't understand the process, they may end up missing out on good deal of money," he says.

"The most important thing for business owners to understand is not to expect the insurance money right away," Arik says. "Unless it's very minor damage-it will take at least nine months to a year for you to get your money."
The Scrivos are still working to get the insurance money due to them, as their case is still in litigation.