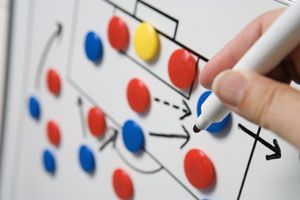 Without BOA, Rash says she never would have thought to launch a training salon concept, which has emerged as both a financial and branding bonus. "This has enabled me to capture a piece of the market that I would not have touched," she says.

Chreky's reliance on BOA paid off when she asked the board to review a marketing plan she and her team were ready to implement.  "If they hadn't done an analysis of the campaign, we would have gone ahead with unwise wording, and it would have been terrible!" she says.  "A board like this provides checks and balances to your business so you know where you're heading. Sharing how we apply integrity to our businesses has been inspirational to all of us."

Zona credits his boards with elevating him to a heightened understanding of sophisticated financial matters. To present to his out-of-industry board, he produces his own annual report.

"A lot of people would say that they can't be bothered creating an annual report," Zona notes. "But people say they can't be bothered going to the gym, either. For me, producing this report is very useful. I don't make it fancy or hire a graphic artist to do the cover, but it's helpful to go through the process each year."

As a side benefit, board members sharpen their presentation techniques, improve their listening skills and enhance their leadership potential. "I treat the groups as though they're my boss," says Zona. "It forces me to prepare and do presentations, which makes me a better decision-maker."
But it's the inherent accountability that's irreplaceable. "When we outline what we intend to accomplish for the coming quarter, at the following meeting the board will refer to those stated goals," says Charles. "If we say we'll do something, they'll hold us to it."

Zona agrees. "Business owners tend to ask pointed questions," he says. "When you own a business, you don't necessarily answer to anybody, and because of that we can trick ourselves. The other business owners call you on your own claims."

Adds Rash, "Meeting over coffee is one thing. But these are skills that even help you run your own staff meetings, because you've now experienced a meeting on a level at which you're not the team leader."

Board camaraderie alleviates that lonely-at-the-top feeling, agrees Zona. "Other business owners live the emotional life and experience the same risk tolerance that I do," he notes. "The board establishes a like-mindedness and a joint commitment in helping each other along that's naturally effective."

The Onboard Board
At The Face and The Body Spa in St. Louis, owner Peggy Mitchusson was meeting two to three times a year with an advisory board primarily consisting of clients with business backgrounds. Then about six years ago, she looked around at the presenters at those meetings and saw a management team that could take over the board role. Mitchusson made a strategic decision to replace her advisory board with her own executive team.

"Outside people could be objective, and everything they said was pertinent," Mitchusson says. "But we spent so much time explaining things, catching them up. Having an inside group means that the board members are all industry experts and know exactly what's going on at the salon."

With 11 members, Mitchusson's inside board is three to five participants larger than her previous board. Currently sitting on her board are the salon's:

Whereas Mitchusson paid her outside board $500 per meeting (or $750 if they preferred to take their payment in spa gift certificates), attendance at monthly board meetings are included in her management team's job descriptions. But the bigger benefit is that this arrangement has enabled Mitchusson to move toward an Employee Stock Ownership Plan and continue to help her business grow rather than sell her business in order to retire.

"We've had a lot of growth," Mitchusson adds. "Six years ago I didn't have as much formal structure, and I didn't staff all of these positions. But we couldn't realize, until we started meeting as a formal board that, for us, this is such a better way to do it."