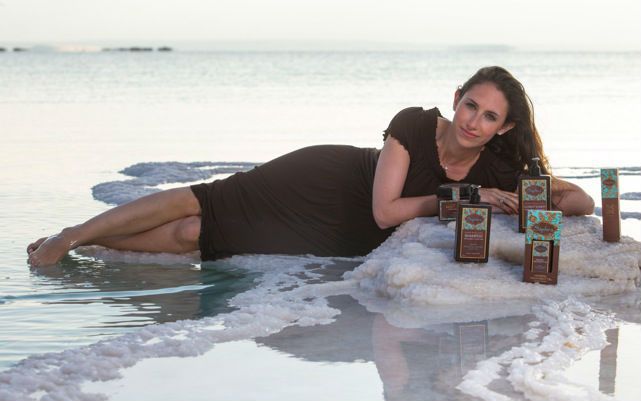 When she was 16, Saphira Tessler’s parents moved the family to Israel for her rabbi father’s sabbatical year. At first Tessler wasn’t happy, but later she convinced her mother to stay so she could finish school in her new home. While there, Tessler became fascinated with the Dead Sea, particularly for the beneficial minerals it yielded for skincare products. She began to wonder if those same minerals would work to make hair soft and beautiful, just as it does the skin. Years later, with her husband Aviad, Tessler-Greenberg visited chemists and factories through Israel, arriving at an ideal hair care formulation containing 26 essential minerals, 12 of them unique to the Dead Sea. In 2012, Saphira Hair Care launched at Cosmoprof North America, quickly gaining distributors. As she grows her new company, Tessler-Greenberg hopes to nurture other women following in her entrepreneurial footsteps by pledging to give back to women’s empowerment organizations each year.

How are you a self-believer?
Tessler-Greenberg: I believed in myself nine years ago to move to Israel as a 16-year-old because I was looking for meaning—and what better place to search for meaning than the Holy Land? I was a self-believer when I had a dream to start my own business with something that no one else has done before, using minerals from the Dead Sea for your hair, and it’s taking off all over the world. Becoming a self-believer is difficult since women frequently tend to put themselves down, but it is so important to believe one can fulfill her dreams.

Since you started your own business, how have your motivations changed?
Tessler-Greenberg: In the beginning, I was a bit nervous to go against all the big guys in the market and show my young female face. But now, more than ever, I realize women need to see a female face and hear a female voice behind their products. My motivation today is to pass on a meaningful message with the products.

What do you do on a daily basis to help you grow as an entrepreneur?
Tessler-Greenberg: Spending time with my daughter every day reminds me of what is important in life.

Who or what inspires you?
Tessler-Greenberg: I meet a lot of people who have gone through struggles and hard experiences, and it is inspirational to see how people are able to push through all the muck and see the light in life.

What is the most important lesson you’ve learned from running your own business that you would share with other women?
Tessler-Greenberg: Don’t let others intimidate you, and go with your gut. If you have an idea that you think can be successful, then go for it. People will always try to intimidate you and think they know betetr. So listen, breathe and say thank you, but no thank you. Everyone has a valuable opinion, but the most important part is just following your gut.

As you grew your company/brand, what ‘Ah-Ha’ moments of clarity helped you shape its future course?
Tessler-Greenberg: The best “ah-ha” moment I had this year was realizing that taking chances and following my gut can pay off. Partnering with the Waldorf Astoria Jerusalem was a goal of mine, and despite being intimidated to approach them, I reminded myself I had nothing to lose. As a result, our Mineral Mud is given to every guest staying at the hotel during turndown service. We will also be opening the first Saphira Salon at the hotel, which is exciting for all of us at the company.

Throughout your professional history, what’s the best lesson you’ve learned after making a mistake?
Tessler-Greenberg: When I was studying with the world-famous “Positive Psychology” guru Tal Ben Shahar, he taught me a great lesson: “Learn to fail, or fail to learn.” I will make mistakes, but that is how we learn in life.

Share something personal that very few people at your work would know about:
Tessler-Greenberg: My passion for singing. My band performs at weddings here and there in the evenings. I also have performed as the lead in many musicals in Israel. I starred as Eva Peron in Evita, Maureen in Rent and Aida in Aida.

If you were training another woman to take over your job, what’s the most important advice you would offer her?
Tessler-Greenberg: Don’t lead the company from the front but, rather, from behind. People will follow if their needs are listened to and a feeling of togetherness is created. A leader must walk with the people, and even behind the people, not in front.