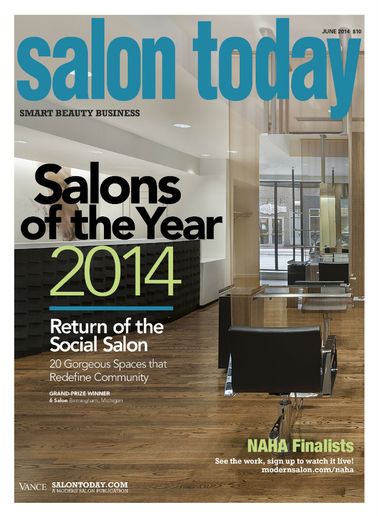 Today’s salon and spa design goes beyond a gorgeous backdrop for a great service, and it offers clients more than a temporary respite from a busy day. Now, salons and spas are leveraging their inherent one-on-one, human interface factor to gift clients with some invaluable connectivity in an increasingly digital world.

How does that play out in the way owners are designing their spaces? They’re actually building in architectural features that engage, comfort, tease, educate, delight and inspire.

Today, bar concepts of every kind, including blowdry, make-up and color, are beckoning clients to gather and be part of the process. Built-in photo booths and iPads at stations invite guests to take pictures of their finished looks and print them as a keepsake or share them via social media. Colorful portraits at styling stations disappear with the flick of switch, surprising clients when they reveal the mirrors behind. And, versatile salons with mobile stations and sliding storefronts can convert into an indoor/outdoor experience on fair-weather days.

Explore each of our 20 SALONS OF THE YEAR by clicking on each salon’s name below:

SOTO - Salon On The Ohio in Cincinnati, Ohio, owned by Gregory Schroeder and Anastasia Kim Blair