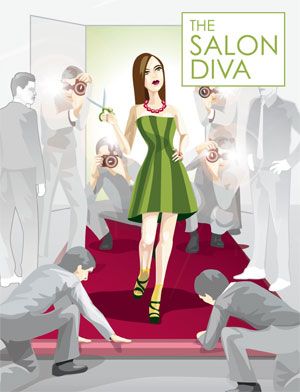 Often, the salon Diva maintains a love/hate relationship with the salon owner and the rest of the staff. Over the years, he or she has developed a strong book and becomes financially beneficial to the salon. That gives the Diva a certain degree of power, and he or she wields it by making demands of the front desk, fellow colleagues and even the salon’s owner. The more others give into the Diva’s whims, the more demanding and controlling he or she becomes, until even salon management begins to adapt its own policies to please the Diva.

Kitty Tierney, owner of Impressions Salon and Spa in Mequon, Wisconsin: “I recently let a Diva go, and she was very smart. She never did anything in front of me, but she brought everyone else down. She talked about people’s weight, teeth, cars, spouse, work, skin—nothing was off limits. She lied and told people I’d made her the secret manager and I was planning on replacing them. Assistants and receptionists quit because she was so mean. Other staff took to eating lunch in their cars instead of in the breakroom. On a Saturday before the holidays, she called in sick, but a few hours later we saw her on Facebook getting a tattoo. It was the final straw, and I fired her. Afterward, my staff e-mailed me and thanked me for being a leader and giving them back their lunchroom. I didn’t realize how deep her dysfunctional disease went until we cut it out. Since then, our salon has never been as cohesive and happy. I proved to my team that I will not allow anyone to treat them poorly, and they proved to me that they look to me to lead them to success and prosperity.”

Don Bewley, Founder of Eufora: “Typically, stylists aren’t born as Divas, they are created when an owner is weak and makes decisions based on fear. You create the Diva, because you allow the behavior instead of facing the tough conversations. Don’t make your decisions based on money, make them based on what benefits the team.”

Christine Zilinski, owner of Salon Concrete in Red Bank, New Jersey: “It’s very important for salon owners to know their staff cannot and should not hold them hostage. The salon must adopt the mindset of rewarding their staff based on performance and behavior. To start, have an understanding of what drives the numbers. Is it great upselling, or prebooking or their average ticket?

“Implement one-on-one meetings with staff members for about 15-30 minutes every week or biweekly. In those meetings, give staff honest feedback about their performance, both good and bad. Clearly define expectations to each staff member. Reward positive behavior, and talk about the importance of setting a good example for the younger team members.

“At Salon Concrete, we do leadership classes once a month for more experienced stylists. They understand how important it is to lead by example. Be proactive. Owners and managers need to understand that it is their responsibility to clearly define and set expectations. Don’t allow it to get to the point where your staff members are Divas.”

Ginny Eramo, owner of Interlocks in Newburyport, Massachusetts: “When it comes to the Diva situation, I’ve always disengaged—I just end the relationship. Of course, I start with coaching, but a Diva often doesn’t receive coaching well, as they don’t have the ability to critique themselves. They see everything as competition. I’ve never had anyone who was a Diva become a team player. Recently, I had someone whom I worked with for seven years, and periodically her Diva behavior would rear its ugly head. We would have a meeting, as opposed to coaching, but I only succeeded in buffering the situation—the negativity was always present. The only reason any owner keeps a Diva is because they are producing, which in turn creates the Diva. Popularity and client retention actually builds their ego in an unhealthy way. And, clients aren’t always honest, they too, stroke egos. They want the stylist to like them and produce a great service.”

Byran Nunes, owner of Blo in Raleigh, North Carolina: “The fear by leadership is really a short-term fear, but the long-term consequences of focusing on that short-term fear are grave. Bringing a Diva-type personality into awareness is key. When you educate someone like this, you don’t have to be attached to what they choose to do with the information. Also, let the rest of the team know it is their responsibility to help this person maintain a focus rather than complain about the person or remain silent. Ignoring or complaining about the Diva to the rest of the team is far more damaging. We are all responsible for the Diva’s effect on the environment, even more so because we are allowing our fears to keep us from bringing the Diva into awareness.

We had a situation where I let a Diva go—and yes, I remind myself that I don’t fire people, people choose to get fired. Our team holds each other accountable, and they hold me accountable, too. Here’s an example: Recently, I created a blog for my staff. There is a calendar on it that plans our education. The other day my director of education called me out on not using my own resource. I created it so people didn’t have to ask her about every event, yet I was doing just that. She knows I am not above being held accountable.”

Lauren Gartland, founder of Inspiring Champions: “A salon is a difficult business to own because there are a lot of people in this industry who are high-drama and they bring it into the business. As the business owner, you must stand firm that this is an unacceptable behavior and it will not be tolerated. You can change behavior if you have a person who wants to improve and they embrace you as a leader. If not, let them go!”