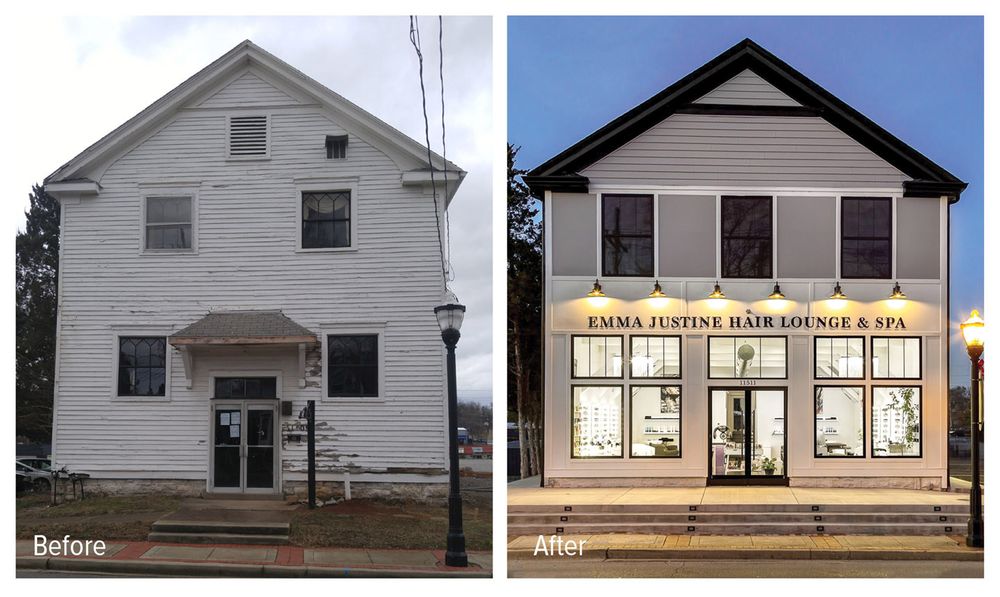 A dramatic side by side comparison, shows the vision and courage the Emma Justine team had when transforming a crumbling old building into a gorgeous modern salon. 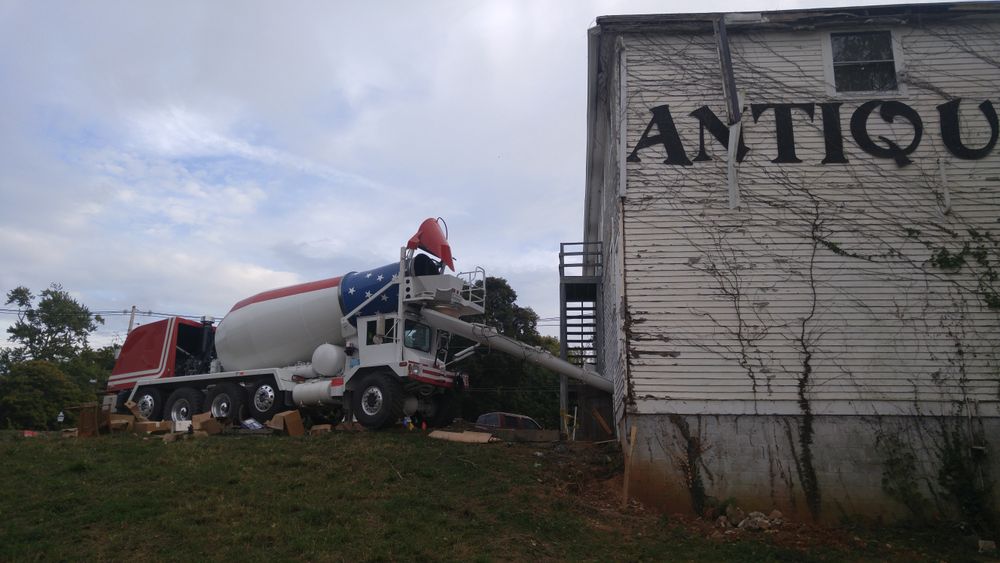 Built in 1880, the building's last tenant was an antiques store that vacated seven years ago. 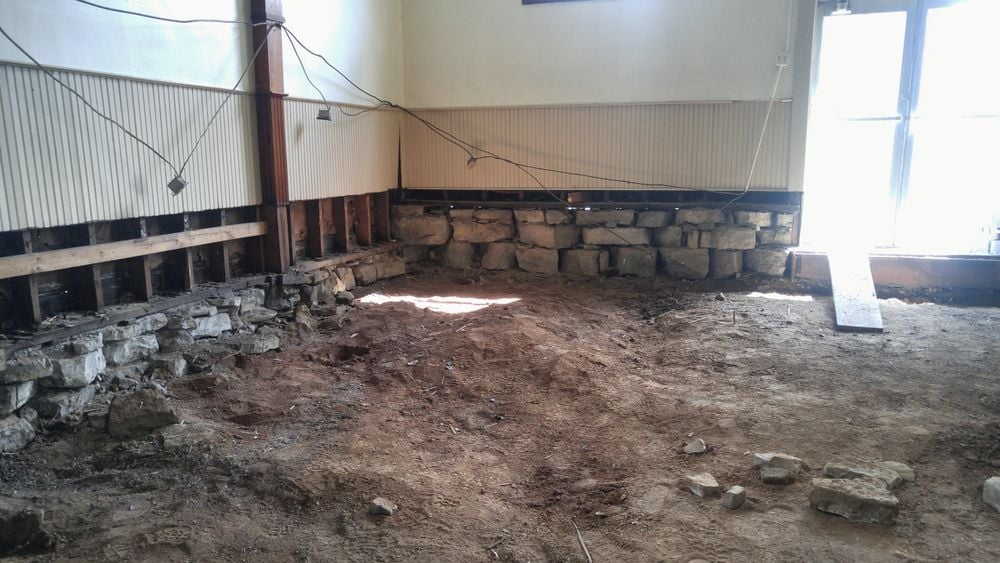 To create the large storefront windows Migirova desired, contractors had to build a concrete reinforcement that was going to take up a good amount of space in the retail area. 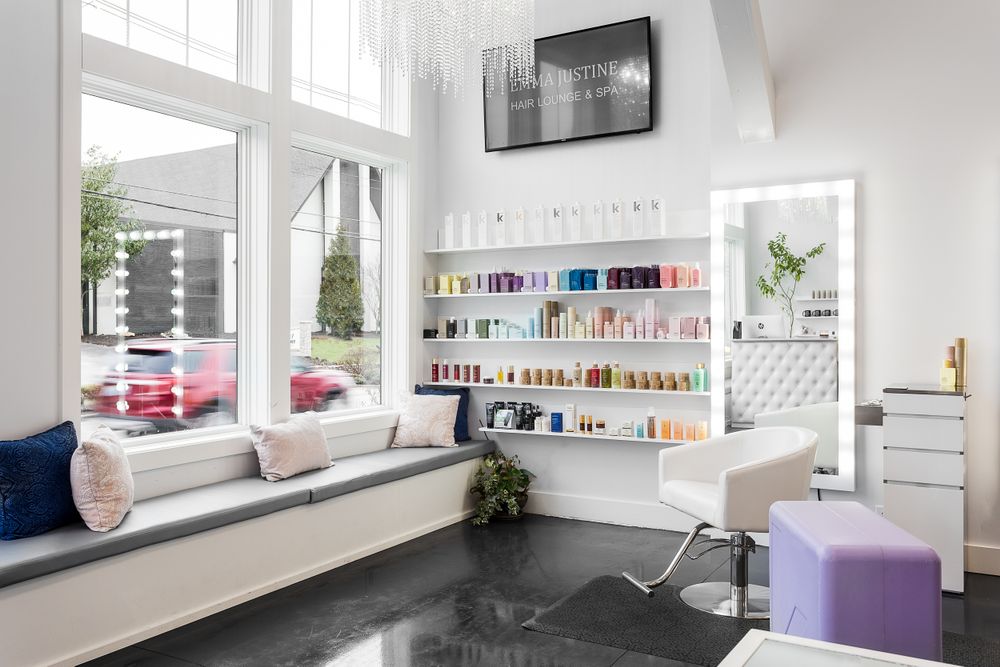 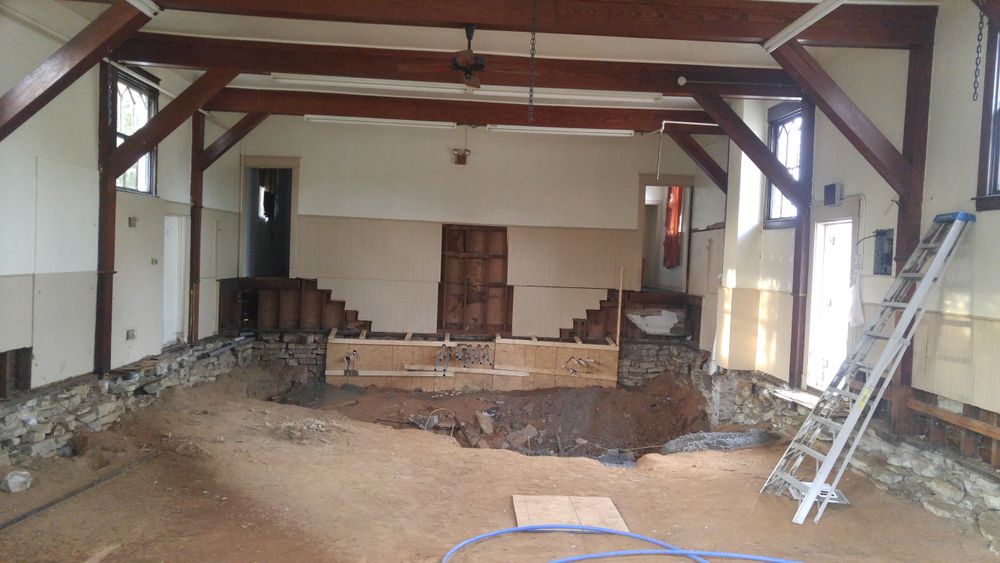 When contractors removed the old, uneven wood flooring, they found a crumbling foundation. 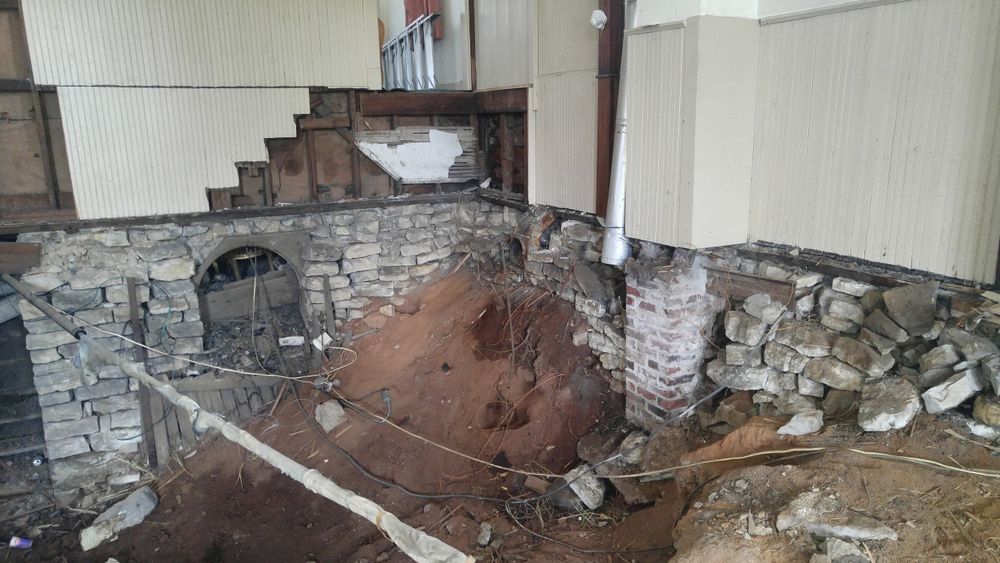 Because the foundation was crumbling, the building had to be lifted, stabilized and reinforced with concrete walls. 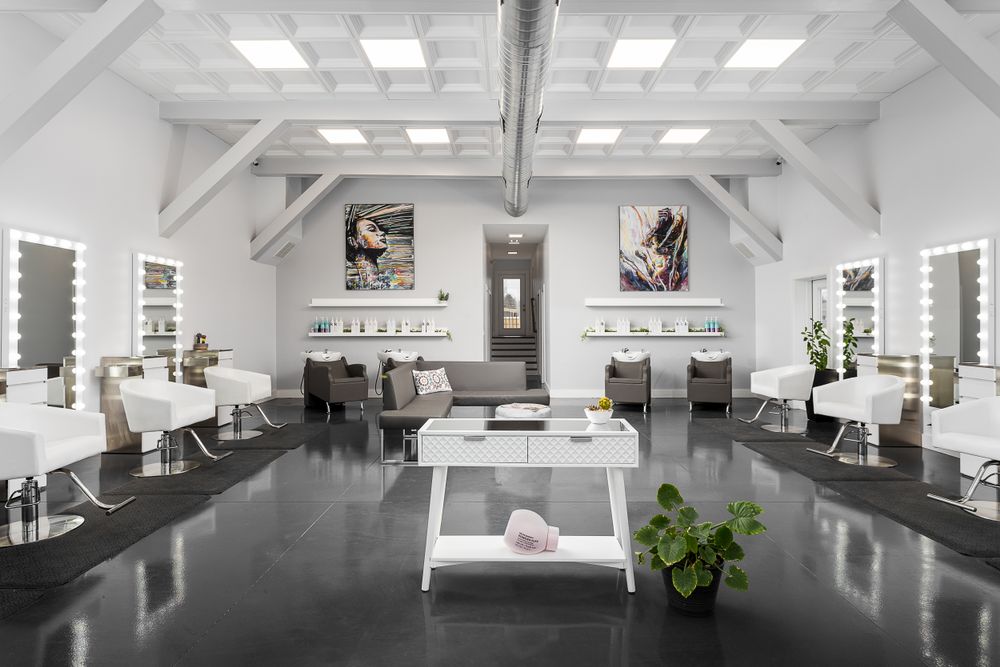 The floor of the salon today. 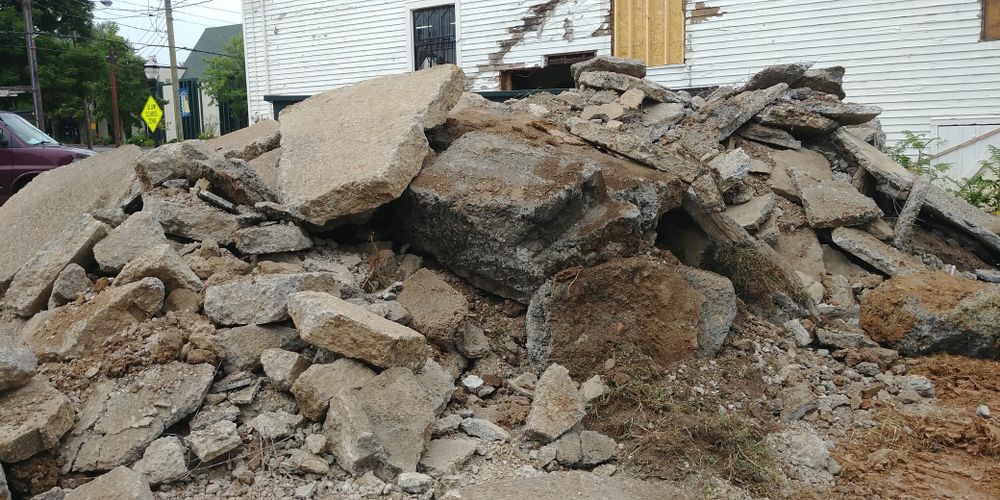 The building's original parking space only had room for four cars. When the contractor dug it up to expand it, they found the foundation of another former building beneath it.
1/8
View all

1/8
Slider
A dramatic side by side comparison, shows the vision and courage the Emma Justine team had when transforming a crumbling old building into a gorgeous modern salon.

2/8
Slider
Built in 1880, the building's last tenant was an antiques store that vacated seven years ago.

3/8
Slider
To create the large storefront windows Migirova desired, contractors had to build a concrete reinforcement that was going to take up a good amount of space in the retail area.

6/8
Slider
Because the foundation was crumbling, the building had to be lifted, stabilized and reinforced with concrete walls.

7/8
Slider
The floor of the salon today.

8/8
Slider
The building's original parking space only had room for four cars. When the contractor dug it up to expand it, they found the foundation of another former building beneath it.

When we are judging the Salons of the Year salon design competition, we are primarily focused on the breathtaking after-design images each applicant enters. But sometimes it’s a before image snuck into the stack of pictures that truly makes us gasp.

That happened this year with Emma Justine Hair Lounge and Spa in Middletown, Kentucky—one of our Salons of Distinction. Owned by Amie Migirova, the salon is housed in a renovated storefront on Main Street in the town of 7,500. which was founded shortly after the Revolutionary War. When looking for a location for the salon, Migirova ambitiously chose a building built in 1880, whose last tenant was an antiques store seven years ago.

Although the building was abandoned and deteriorating, Migirova loved that it was located in the heart of downtown and it’s height allowed it to tower above the other boutiques and shops on the street. In addition to renovation though, the building needed some modifications to make it work for the salon. Migirova wanted a storefront with large windows and oversized doors. Getting her plans approved required several appearances before the town’s historic commission, then working through several denials before a final agreement was reached.

When the contractors removed the old uneven wooden flooring, they discovered the foundation was crumbling and needed to be reinforced. The building had to be lifted and stabilized, and reinforced with concrete walls. Before the new concrete floor was poured, Migirova decided to add hints of gray flecks and diamond sparkles to create a unique flooring.

To add the large storefront windows, contractors had to reinforce the support frame. The concrete foundation reinforcement for the windows was going to take up a lot of space—to utilize the space wisely, they encased it with bench seating and custom cushions to match the salon. USB outlets were installed into the bench seating to allow clients to charge their phones while waiting.

Originally, the parking area for the salon only had space for four cars. When the team attempted to expand it, they discovered that there was a concrete foundation of another building underneath. This set back plans to open another month, but they ended up building a retaining wall and facing it with sparkling white brick, which added to the exterior design.

Read Emma Justine's 2019 Salons of the Year profile, and see more after shots.

When I look at the before pictures of the space, I have to give it Migirova. It takes a great deal of vision, courage and perseverance to see a renovation project on this scale through.  Middletown’s mayor and historic commission were grateful she did—after 27 months of construction time, they organized a ribbon cutting at the salon, publicly thanking Migirova for undertaking this project, sticking to the vision and ultimately giving the neighborhood a face lift and an economic boost.

The Salons of the Year Competition is LIVE!

In its 37th year, the SALONS OF THE YEAR competition issues its latest application in an effort to recognize and celebrate excellent salon design.

How to Win a Regional 'Best Of' Competition

Each year, regional magazines in cities across the country assemble a "Best Of" issue where residents vote for their favorite establishments. Knowing this is an excellent strategy for exposing their brand to potential new clients, the owners of RedBloom designed a marketing program to encourage their clientele to vote. Check out this winning idea that captured a 2020 STAMP award.

As SAAB Salon Spa turned thirty, it wanted to remind its community of their longevity, so they designed a STAMP-winning marketing campaign.

When Penzone Salons + Spas reopened after the mandatory shutdown, Owners Chuck and Debbie Penzone took the opportunity to post themselves in masks with their Penzone Strong T-shirts, and captured one of our STAMP 202 awards

When QVC Host and Bareminerals Expert Lisa Galli presented at Salon Jaylee, they recorded her talking about the holiday gift sets and created Insta-stories. The campaign earns a 2020 STAMP award.

Van Michael revamps its website, positioning the salon as a fashion leader while showcasing its culture and history. The result earned the salon a STAMP 2020 award. Check it out.

Cloud 9 Salon and Spa in Flower Mound, Texas, updates its website to focus on the team, which helps drive their traffic. This website was an honoree in the STAMP 2020 program.

Daring their community to be fabulous, Salon Jaylee gives viewers an inside look at their salon with this 30-second commercial, which earned a 2020 STAMP.

To engage and educate clients during the shutdown, the owners of Salon Rootz launched their own talk show through social media, earning the salon a STAMP 2020 award.

Delaying a bit because of the pandemic, the SALON TODAY 200 application is finally live--with a new focus and a later deadline. Check it out!!

Throughout the salon shutdown, Gene Juarez Salons and Spas kept clients appraised of their reopening plans, gave them a look at the protocols in place and encouraged them to send team members love notes. Their communication campaign wins a STAMP 2020 award for COVID-19 Client Communications

To thank sponsors for raising money for the Children's National Hospital, Progressions Salon Spa Store designs a print ad featuring a rainbow that integrates all the sponsor names in the design. This winning idea captures a STAMP 2020 award.

With a video plea to the community to flatten the curve, a flurry of digital communications and promotions, a new e-commerce site and a unifying rainbow window display, Interlocks captures an honor in our 2020 STAMP for COVID-19 Client Communications.

Throughout the shutdown and beyond, PENZONE Salons + Spas kept their clients engaged through a series of email newsletters, blogs, social posts, and virtual beauty education sessions. They even united their community with the #PenzoneStrong brand. Their COVID-19 Client Communication takes a STAMP award in our 2020 competition.

With the slogan "The New Normal in Caring For You," a well-rounded marketing campaign helps clients prepare for the new services at Karen Allen Salon + Spa. Including a informational video, this campaign captures a STAMP 2020 honor from SALON TODAY.