Chicago is not typically known for its celebrity scene. In fact, one likely wouldn’t think it’s possible to work with some of the biggest celebrities while calling Chicago their home. But Chicago-based celebrity stylist Alex Brown proves it can be done.

In Brown’s story, it proves the butterfly effect is a very real thing. That, with a bit of serendipity and a ton of hard work can grant magnificent payoffs. Brown had a clear goal to work with celebrities in L.A., and by attending one of Jen Atkin’s classes in Toronto, asking to assist her, moving to L.A., and proving her skills in the salon, she earned herself a three-year ride around the world assisting Atkin. That’s a very watered-down version of Brown’s story. Keep reading to find out the whole thing, and the day that changed her whole career.

The first serious inclination Brown had about wanting to become a hairdresser was when she was in seventh grade. Her sister’s best friend, who she looked up to, was starting beauty school and that’s when Brown’s real interest began.

“She would test everything on my head, and I was obsessed,” Brown says. “I had all my birthday parties, from seventh grade on, at the beauty school. We all got our hair done, makeup done.”

By the next year, Brown herself was styling hair for seniors attending prom. She practiced on friends’ hair and her own throughout high school. When her own senior year came around, Brown had a slight itch to go to college just for the experience, but knew in her heart beauty school was her path. So, when she was 18 and her sister was 23, they moved to Chicago together.

In the back of her mind, Brown had always wanted to move to LA. Being from a small town in Minnesota surrounded only by small shops with older clientele, Brown wanted her ultimate destination to be LA, living the life she saw the likes of Laguna Beach and The Hills had on TV. But in the meantime, Chicago would be the place she could launch her career. Brown attended school at Mario Tricoci Beauty School for nine months and then got a job at a salon in the Gold Coast neighborhood of Chicago. She assisted there for nearly three years in what she calls a really long, vigorous assistant program, which included class every Tuesday night with exams.

At the salon, she chose to focus on cutting, seeing that as a clearer path to her biggest passion—styling.  She worked at the salon for three years before her career took its biggest pivot.

A SIMPLE ASK CHANGED EVERYTHING

“Instagram started becoming bigger,” Brown says. “A bunch of girls from my salon were more into it than I was, and they were like, ‘Have you seen this Jen Atkin girl? She does all the Kardashians. She's having a class in Toronto. Do you wanna go?’”

She was torn. L.A. was still on her mind, and the class was expensive! Between the hotel, airfare, EVERYTHING that goes into a destination trip, that would make a dent in her L.A. fund. To make it easier to swallow, Brown promised herself that if she went to this class, she would make sure it was her ticket to L.A.

“So at the class, I ended up talking to Jen’s assistant on lunch break,” she continues. “That assistant was like, "Email me if you ever move to L.A. and I'll see if we need someone." And I thought, "Yeah, right. You tell that to everyone."

After that class, Brown was dead-set on moving. The class was in August, and she made her moving date January 1.

Fast-forward to January. Four days after moving, Brown was at FedEx printing off her résumé to bring to salons in the area.

“I was waiting for my résumés to print and I just happened to scroll through my Instagram, and that assistant commented on one of my photos and said, ‘Hey, are you in L.A. yet? We need an assistant tomorrow,’” Brown says. “I had been an assistant for some tough guys for three years. I know how to be an assistant. So the next day, I assisted her.”

Brown arrived at Andy Lecompte Salon, determined as hell and ready to WORK. “It was me and two other assistants working for her that day,” Brown says. “I saw that for other clients Jen was spraying a spray in their hair if they were tangly. So I asked her, ‘Hey, do you want me to spray this spray in her hair?’ She said, ‘Yeah, that'd be great.’

That night as she was leaving, Brown asked the manager of the salon if they were hiring, because she thought that day was just a one-time gig for Atkin. As Brown asked, Atkin turned the corner and responded on behalf of the manager: “No, she doesn’t need a job with you. She’s working for me now.”

“That day literally changed my life,” Brown says. “From then on, I was traveling the world with her for three years, being at her side, anything she needed. Everything that I thought and dreamt of happening kept happening.”

The NEXT DAY, Brown says she was at Kourtney Kardashian's house with Scott Disick and Kourtney and her kids. Brown has styled the likes of the rest of the Kardashians, Jenners, Bella Hadid, Shay Mitchell, Hailey Baldwin, Chrissy Teigen and Olivia Culpo.

After three years of being one of the right-hands to one of the biggest hairstylists in the world, Brown decided to move back to Chicago. In 2017, she opened her own studio space in Chicago’s West Loop neighborhood. So, how did she walk away?

“I'm such a homebody and, I always say, I just wanna wake up on a Sunday someday with my husband and kids and, like, make pancakes and have a good day, you know?” she asks. “I just didn’t think that lifestyle was sustainable for the rest of my life. I feel so happy and grateful that that had happened, and it was hard walking away, for sure, especially from Jen. She’s the most supportive person. She's the best boss, honestly.”

It was only almost 3 summers ago that I attended Jen's class and met her for the first time...little did I know what I would gain from that day. After assisting and working on her team for the last 2.5 years I've experienced way more than I could ever have imagined..from the numerous countries and cities I've traveled, to the roughly 45 flights I've taken, from my blonde pixie to black long hair 😜, and the hundreds of amazing people I've met and worked with from all around the world. I cant find the right amount of words or ways to truly thank you Jen for what you have done to change my life and my career. 😭 I've learned SO much from you and all of the people you've introduced me to. Coming from a town in Minnesota of 116 people, this was something I had only dreamt of doing my whole life. You've made my experience nothing short of incredible. THANK YOU. @jenatkinhair ❤️🙌🏼 😢 To all of my family, friends, coworkers, clients, and every person I've had the opportunity to meet or email with 😜the last few years -THANK YOU for supporting me and every crazy decision I've made and for the nice words and advice you've given me! 💕 With SUCH a bittersweet feeling, I'm BEYOND excited to announce I will be continuing to expand my career back in a city that truly feels like home to me. As of June 1st I will be working as a freelance hairstylist based in CHICAGO! ❤️(Working remotely in LA and NYC at times too). Please email me at alex@alexbrownhair.com to book an appointment for cut/styling/extensions. 💇🏻. I'm really looking forward to the future and can't wait to see where life brings me next 🎉 !!! ❤️😘🙏🏼

Once she returned to Chicago, Brown took the tools she learned from Atkin to build her book of clientele. Atkin taught Brown how to take pictures and really utilize Instagram and social media. Part of Brown’s role while working with Atkin was to Snapchat her styling hair or writing a how-to. Through Instagram, Brown reaches out to Influencers who will get the word out about her studio and her work in the area, and in turn become clients of hers.

Collaboration like this has been a major focus of Brown’s this year. So far, she has hosted two networking events for the Chicago-based pro-beauty community to share ideas and talk to one another.

THANK YOU to everyone who came out to our first “Conversation and Collaboration” Dinner last night here in Chicago! It was so fun getting to know other people from all parts of the hair industry. Can’t wait to have more opportunities like this to bring everyone together! #chicagohairstylists ALSO big thank you to @jenatkinhair for joining in and inspiring us via FaceTime all the way from LA ❤️ #bossbabe Head over to @maneaddicts stories to see how the night went down!

Brown and Atkin still keep in touch. In fact, when I was visiting Brown, she received a package from Atkin for her birthday with a note from Atkin herself on personalized stationary (talk about perfect timing!). Often, Brown styles clients she met through working with Atkin, whether it be flying to New York for the day to style Kendall Jenner or Shay Mitchell and Kourtney Kardashian when they stop in Chicago. Her retail area is fully stocked with Atkin’s haircare line, Ouai, and she regularly appears on Aktin’s Mane Addict’s social media and website.

If Brown could leave stylists aspiring to work with celebrity stylists or celebrity clientele any advice, it would be don’t be afraid to take the initial leap and just straight-up ask!

“In L.A. there are so many amazing hair stylists that you could assist from. Go to the agencies and see if they need assistance for their stylists. If you assist someone that you look up to and want to work with, that's such a good foot in the door. But you do have to put in the work to really get anything out of it.”

This was one of our top articles of 2018. Find out what else made the list. 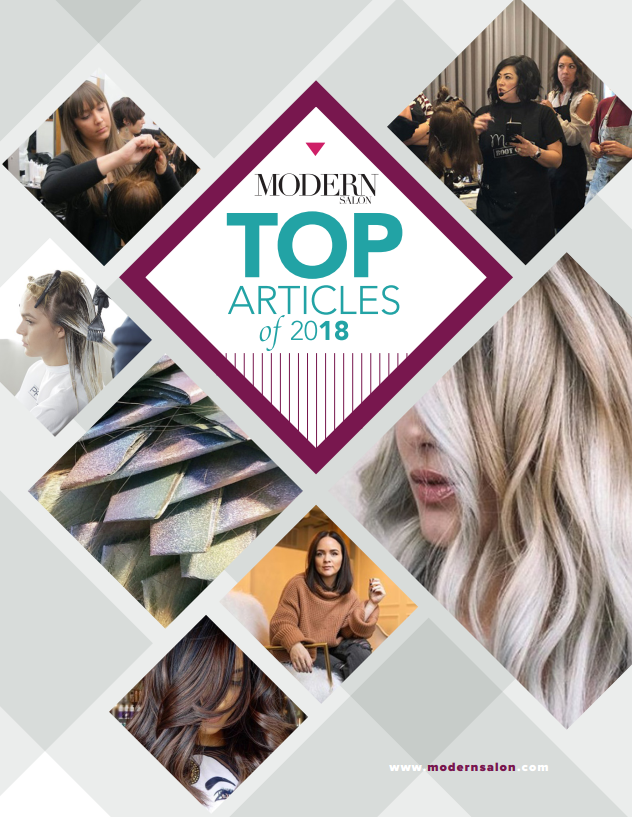