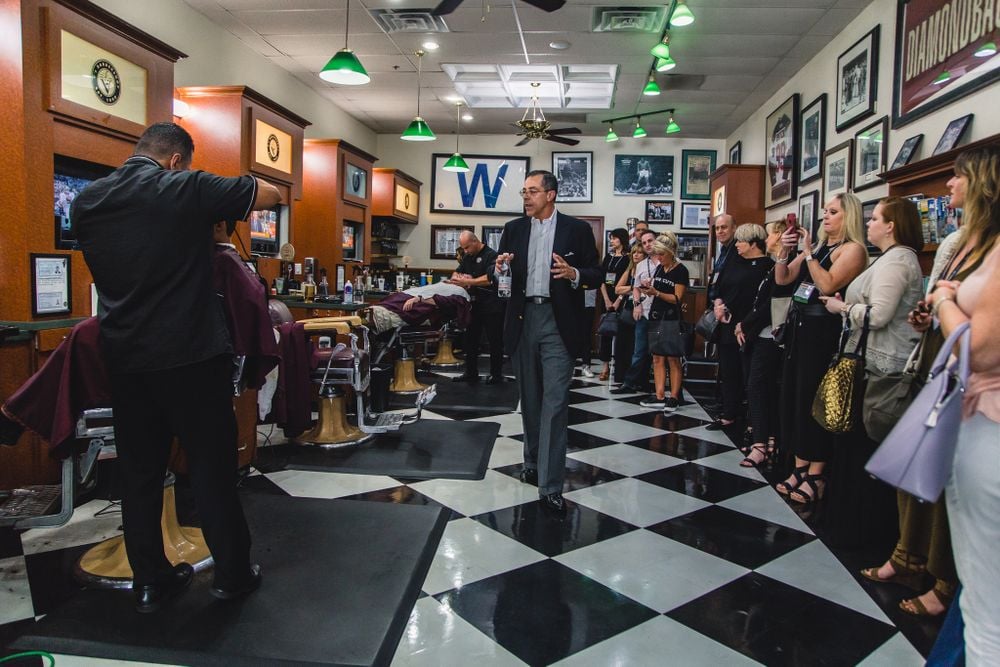 On tour day, Jim Valenzuela took ISBN members to his oldest barbershop and his newest one. The following morning, members got to quiz the V's management team over brunch. 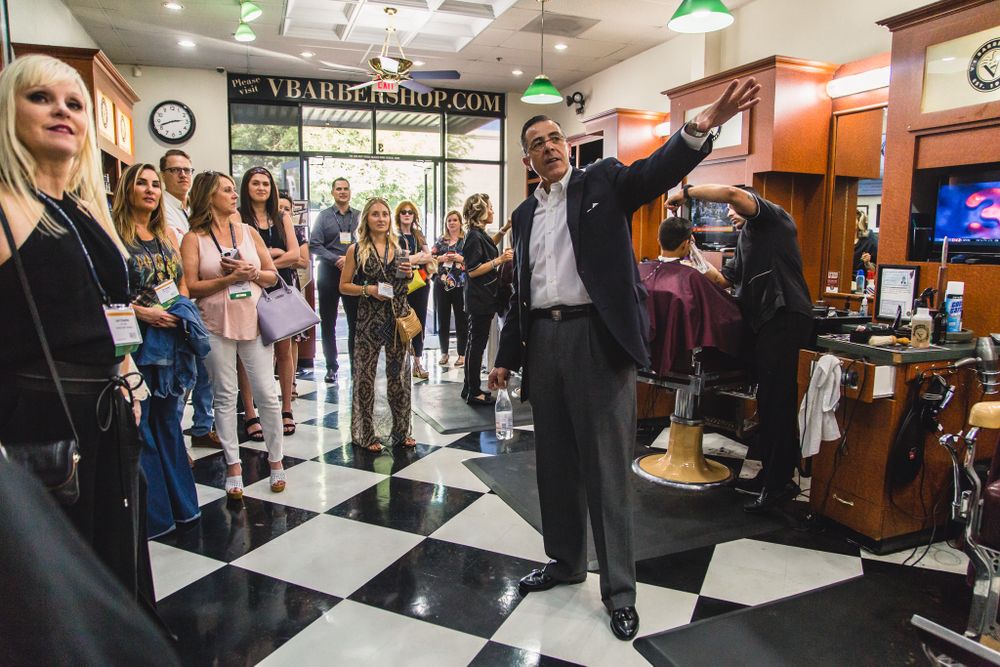 1/2
Slider
On tour day, Jim Valenzuela took ISBN members to his oldest barbershop and his newest one. The following morning, members got to quiz the V's management team over brunch.

Jim Valenzuela recently did something he could never have envisioned 20 years ago when he opened his V’s Barbershop in Phoenix, Arizona. Back then, he openly admits, he didn’t have a clue about barbering or the beauty industry. Yet in May he stood up before 200-plus delegates gathered for the International SalonSpa Business Network (ISBN) 2018 conference to share his journey from one shop to 36 locations across 15 states and a further 25 sold licensees actively seeking real estate opportunities.

“I was daunted at first because these guys are already running multi million-dollar businesses,” says Valenzuela about  ISBN members,  all of whom own or work in multi-unit salon and spa companies, or are regional market leaders like Gene Juarez Salons and Spas in Seattle or top franchise operators with multiple locations across the US. “But ISBN is all about sharing and I wanted to invite members to come into my barbershops and see what has contributed to its growth into a $20 million dollar business over the past 20 years.”

The Tour de ISBN program launched last year with a site visit to the  Gene Juarez operation. The most recent was a tour, sponsored by tech company Shortcuts, of the first V’s, opened in 1999, and the newest one, also in Phoenix, which opened last year, and included the opportunity to sit down and quiz Valenzuela and his team.

“I didn’t know anything about barbering; I didn’t even know where to buy a comb,” he says. “But I was looking for a new opportunity and happened upon a traditional barbershop, just like the one my father used to take me to as a child. I keenly remember the sights and smells of Nick’s Barbershop and the real experience of being a boy among men. It was a place we could go together and do more than get a haircut. It was a place that made lasting memories.”

Valenzuela opened his first location with an office in the back, learning on the job sweeping the floor and shining shoes. On his first day, one of the four barbers he’d recruited packed up his tools and walked out because he didn’t want to do a straight-edged shave, one of the key services Valenzuela was determined to offer.

The ultimate goal for him was to create an authentic barbershop where shaving was part of the deal, something Chief Operating Officer Emily Brown adheres to with painstaking vigilance. Every V’s has heavy antique reconditioned barber chairs – the throne of any barbershop – while the walls are covered in sports memorabilia that Valenzuela, a sports fanatic, has curated for each location. In 2017 V’s barbers carried out 50,000 straight-edged shaves.

With such attention to detail it’s unsurprising that each location has taken a year from conception to opening.

“It’s the experience that counts,” explains Brown, who has been with V’s since 2005.  “We have a limited menu of services but they are all done well, delivered in a space men appreciate and where moms feel comfortable bringing their sons.”

Despite the growth of the company, Valenzuela has succeeded in keeping the corporate team small, with just three individuals up until 2015, now expanded to six, to protect the authenticity of the company.  All six were present for the Tour de ISBN, the keynote presentation before the tour and the round table discussions the following day, where delegates were able sit down with the team and delve into more detail about the brand and experiences of the team.

“It’s come a long way since those first months, when I didn’t have many patrons,” adds Valenzuela, who sold his last corporate-owned location as a franchise just two years ago. “We are now 100% franchised, with over 200 barbers nationwide and our focus is on growing our brand across the entire country. But we will do it in our own time, guaranteeing the authenticity of every single outlet and supporting our people so they carry on delivering that authentic barbershop experience.”

The World Health Organization's announcement about COVID-19 pandemic is raising many uncertainties and questions about the way business will now be conducted around the world. In the face of this unusual situation, companies often do not know what to do and how to communicate with customers, partners and even their own employees. The founder of the digital communication agency Blue Oceans PR share tips on how to manage this situation.