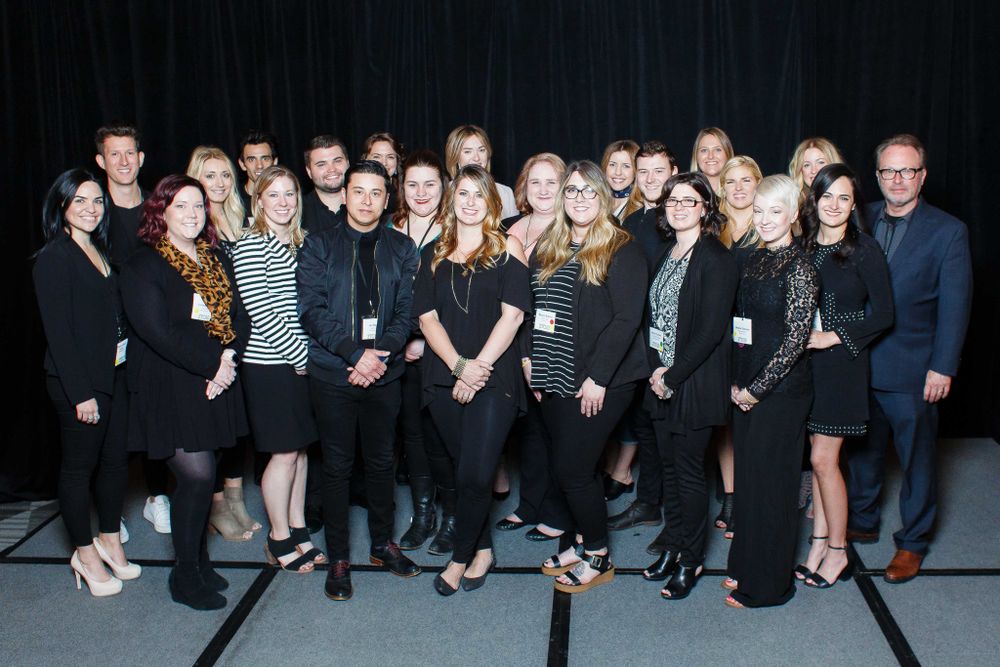 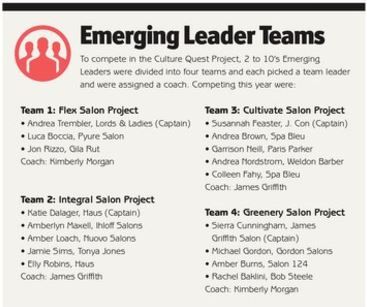 For the second year in a row, Qnity and Salon Today partnered to host The 2 to 10 Emerging Leaders Competition, helping young leaders work together to pioneer new salon concepts.

Emerging Leaders are salon leaders who are ages 30 years and younger and who represented multi-location salon companies with between two and 10 locations. In this year’s competition, the Emerging Leaders worked together in teams to compete in Culture Quest. The assignment was that each team present three to five concrete ideas that would help create a culture so strong no employee would dream of leaving.

“We are pleased to complete the second year of the Emerging Leader Competition,” says Tom Kuhn, president of Qnity and founder of the 2 to 10 Project. “Through this, we are giving young salon leaders a voice, helping them accelerate their growth and encouraging them to build a community with their multi-location peers. After all, they are our future.”

From March through June, each team worked on their project, challenged by the fact that team members were from different salon companies and often worked in a number of different time zones. Since the project was in addition to their typical job responsibilities within their own companies, the teams often resorted to text message and emails to communicate. James Griffith, owner of James Griffith Salons in western Florida, and Kimberly Morgan, director of education and a stylist with Bob Steele Salons in Atlanta, served as mentors and coaches to the teams.

“The teams really impressed me in our mentoring sessions with how organized they were and how seriously they were taking the whole project,” Morgan says. “I was pleasantly surprised by the fearlessness of the teams in coming up with their concepts. They were unafraid to flush out an idea that might have been called too bold or unlikely to succeed in a traditional salon brainstorming session. Their concepts were bold, innovative and possible—and their research backed them up. It was inspiring.”

To compete, each team prepared a Powerpoint presentation, which each team member responsible for a section of the presentation. Over several days throughout early July, each team presented their culture concept to this year’s judges, including Griffith, Morgan and Stacey Soble, editor of Salon Today, as well as Qnity’s Tom Kuhn who served as moderator, organizer and coach to the judging panel. Each team was evaluated on the following criteria: originality, feasibility, teamwork and presentation.

“While each team delivered many innovative and memorable concepts, after much debate the judges unanimously decided that Team Greenery had not only done exhaustive research, but they delivered on a number of pioneering concepts, and we named them the winners of the competition,” said Stacey Soble. Team Greenery, who named themselves after the 2017 Pantone Color of the Year, worked from a mission of creating a whole-life culture that supports balance, encourages growth through empowerment and cultivates enriching its communities. Their presentation included three main areas—a childcare partnership, employee empowerment and culture club.

One of the biggest ways Greenery planned to build a strong culture and loyal team members was by tending to the personal needs of their employees and their growing families. After researching several different daycare concepts, they proposed developing a partnership that was mutually beneficial for both businesses—the salon and the daycare.

“In our concept, the salon would assist in providing nutritious lunches, educational activities and opportunities for creative exploration to make the atmosphere at the daycare unlike any other,” says Sierra Cunningham. “In turn, the daycare will provide opportunities for employees to achieve work-life balance, taking in to consideration the demanding scheduling requirements of salon hours of operation, including providing Saturday availability.”

The Greenery team stressed the importance of building life-long relationship with team members who seek growth. They believe giving employees the opportunity to share in the profits reassures them of their value and fuels their fire to create a stronger salon for tomorrow. As part of that process, 25 percent of the company will be held by the employees, with each employee empowered to affect their share of the profits according to their effort and total production.

“Experience and relationships with long-term clients will enable more tenured employees the power to earn more of the profit shared, and each individual will be empowered to focus on their strengths to reach their full profit share potential,” Michael Gordon explains. Profit sharing is based on total revenue generation, so that an employee who is responsible for 10 percent of the total company revenue would receive 10 percent of the profit share. “There are no limits to earning potential,” says Amber Burns of Salon 124. “When the company is more profitable, the employees receive larger sums.”

As a result, when the company wins, everyone wins, and this encourages employees to collaborate on strategies that increase profitability.

Another way Greenery intends to empower employees is through the development of a Culture Club, which encourages employees to lead and grow alongside their teammates in more ways than just inside the salon. Team members would be peer-elected to serve in Culture Club positions that are well-suited to their strengths and interests. For example:

Not only did the team members learn about research, teamwork and communication skills as they worked on their projects, but the competition from the judges learned about the value of including emerging leaders in management conversations within their salons. “I think all salons should include these young leaders in the creative process of managing the salon culture, encouraging them to cultivate new ideas and listening to their ideas,” says Griffith. “Not only is it important to engage these young team members, but it’s great for them to experience a salon’s challenges first hand. They see it’s not as always as they might think, and in turn, owners get inspired with fresh ideas.”

While Team Greenery swept the competition, each of the other three teams offered some fascinating concepts that broke new ground when it comes to salon culture. Following are some of the judge’s favorites:

The Integral team had big plans for the salon break room, envisioning it as a place that went far beyond a place for employees to grab a quick lunch. “We see it as a bigger space with a complete kitchen where employees can actually cook healthier options for lunch, with a closed mother’s lounge offering a relaxing space for breast pumping, a creative corner set up with mannequin heads on stands so stylist can try new trends when they have a moment, computers loaded with photo editing software which are readily available for team members to access their email or work on social media platforms,” says Katie Dalager. In addition, the salon would support team members’ social media efforts by bringing in outside trainers and by constructing a photography corner in the salon, complete with light boxes, light rings, a pullout background with the salon logo and hashtags.

Team Cultivate proposed a clever plan for recognizing team members who met and exceeded seasonal benchmarks. The team organized the 12 month calendar into eight different selling seasons, with a different service and retail focus on each one. For example Season 1 in January and early February would be referrals season; Season 5 in July and early August would be the season for conditioning treatments and during the late November and December timeframe of Season 8, the focus would be gift set sales. The team decided to reward those meeting sales goals with vacation time. Those reaching sales of $75,000 would earn a week of paid time off and those earning sales of $100,000 would earn a week and a day and on up the tiered scale to those earning $200,000 receiving 2 weeks. In addition, team members would earn a unique form of public recognition. “We also reward benchmark achievers by allowing them to wear color,” says Susannah Feasler. “Most salons have an all-black dress code. When someone is wearing color, it really stands out.”

Team Flex proposed an interactive education model that allows modern learners to learn quickly and efficiently. Each class was broken down into three parts: