Chris Murphy, who co-owns three Maximum FX salons with Javier Herrera, came to the salon industry with a background in finance. They bought the original salon in 2002 and expanded into a second location in 2006. Currently, there are three locations with 60-65 employees. The business ran along efficiently for the first five years or so until profits began to stall.

During 2007, Murphy noticed he was experiencing high turnover, which meant serious financial ramifications for the salons.

“Turnover is not just financially damaging; it’s the biggest sign you have a culture problem—your team members don’t want to stay,” Murphy says. “They’re not emotionally attached to your brand, and they’re just punching a clock.”

After reading the book, Tribal Leadership, Murphy decided the best way to establish his salon’s culture was to involve the entire team. Murphy wanted his stylists to know he was serious about the change, so he closed the salon on a Wednesday and paid them all to come in for a culture retreat.

“We had to establish a purpose so the whole staff could understand why we exist as a company,” he says. “It was expensive to do this, but you can’t put a price on culture.” 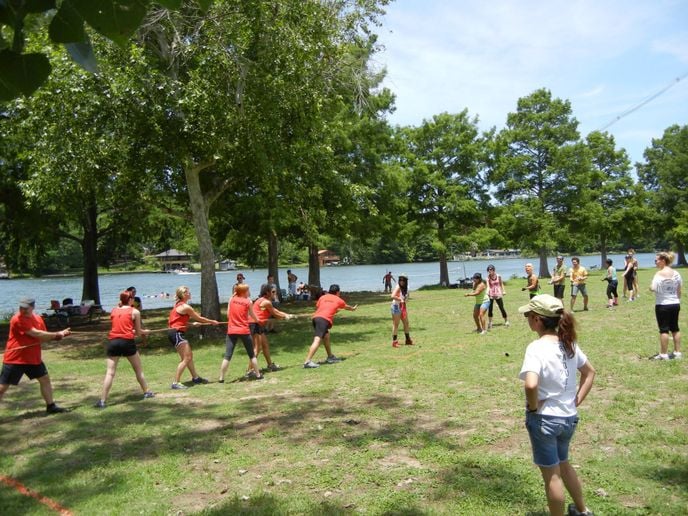 Teams from different Maximum FX locations tug it out during the salon's Battle of the Salons.

The team circled values on a sheet of paper to indicate what was important to them. Murphy collected the sheets and determined which values were shared by the team. He isolated the top 10. Next, they came up with a purpose. Once the team had established purpose and values, the rest of the day was spent defining what those values really meant.

“With a set of values, it makes it easy to know what to do,” Murphy says. “You have a stylist who comes in late, doesn’t participate, isn’t being a team player—well, that’s against our value of teamwork. If we have conversation about it and I fire them, they understand why.”

To keep values and purpose at the front of his stylists’ minds, a different value is highlighted every week during daily huddles.

Twice-yearly culture retreats also keep employees engaged. “We used to do it once a year, but we found after about six months, the energy and momentum slows down, and it’s hard to maintain that family feeling with three locations,” Murphy says. “So we needed to do something to stay emotionally attached to the purpose and values.”

The first retreat, which takes place in the summer, is the same every year: the battle of the salons. This friendly competition, which can be anything from an obstacle course to tug of war, brings all the Maximum FX employees together to celebrate teamwork.

“But we also tie it into a community clean-up that we usually do at a local park,” Murphy says. “So the first part of the day will be about service, then we have fun.”

Stylists prep for the day by decorating T-shirts, and the winning team gets to take the traveling trophy back to their salon.

The second retreat in the fall/winter features guest speakers and centers around one of the salon’s core values. Murphy stays out of planning these retreats and lets the team take over and put them together. Like the very first retreat, these take place on a Wednesday, and employees are paid to be there.

Employees work on an exercise to help define the company's cultural values.

In the years since Murphy implemented culture in his salons, the company has changed completely. “We increased our staff loyalty to almost 90 percent in three years,” he says. “Our shared values connect us and give us a clearly defined place from which to operate. Now, when we have a problem, we can pull out our values and see which ones are being compromised. The stylists can’t argue with them because they came up with them.”

When he asks employees why they stay, they say, “I feel like people care about the work I’m doing here, and care about the team members and our success.”