It isn’t often a single owner of one small salon can influence the entire beauty industry with his actions. But Jerry Gordon, owner of J. Gordon Designs in Chicago, was a powerful voice for decades who made a big impact with his ideas, his creativity and, most of all, his passion.

When he passed away in November 2015, the beauty industry mourned the loss of this legendary hairdresser and owner.

In addition to owning a salon with his wife, Karen, and being a third-generation hairdresser for more than 60 years, Jerry was also a past president of Cosmetologists Chicago, past vice president of Intercoiffure America/Canada and an educator.

His son, Tony, also is a salon owner—he and his wife, Pam, own three Gordon Salons in the Chicago area—and Jerry’s daughter, Kathrine Gordon, is an award-winning stylist in Hollywood who has been the recipient of the prestigious BAFTA award. His daughter, Elizabeth, is an antique dealer in Los Angeles. Jerry’s salon was filled with items from her shop. Tony’s two children have also entered the beauty business and are stylists at Gordon Salons.

Living and breathing beauty every day, Jerry often said he would never retire, and he worked up until the day he died. His love for the business was evident to everyone he came in contact with, whether it was a client, another owner or an industry executive. (See Karen's moving social media tribute to Jerry!)

SALON TODAY recently sat down with Karen and Tony who thought it important to continue sharing Jerry’s wisdom by offering five of his most important principles:

BE TRUE TO YOURSELF

“It’s not easy to stay small,” Karen says. “I wish I had a dollar for every person who asked, ‘When are you going to open your next salon?’”

But Jerry never caved to pressure to open another location. Instead, he found another way to increase his revenues while remaining a boutique salon.

In the late 1970s, Jerry began a new way of scheduling that still thrives today: double (or split) shifting. During this time, more women were entering the work force and couldn’t always visit the salon in the middle of a work day. Double shifting allowed Jerry to keep the salon open longer hours without burning out his team.

“Double shifting also allows you to control your costs,” Karen says. “Instead of taking on a second location, you can double your hours without doubling your overhead. You can have 16 hairdressers instead of eight and capture a longer range of hours for clients to come in without the expense of operating another salon.”

“It’s basically a six-hour shift that allows everyone to make the same amount of money in 30-35 hours a week instead of 40 because they are booked solid,” Karen says. “They have time to do things outside the salon.”

When Jerry introduced the concept, stylists were used to working long days and it was hard to switch schedules from 50 hours a week to 35.

“I’ve heard people ask Jerry during his lectures, ‘How do I tell my stylists I’m going to cut their hours?’” she says.

Jerry encouraged owners to do it incrementally, maybe even leaving some long-time, successful people alone. But ultimately, it is designed to help the business, not hurt it.

And with their clients in mind, the salon is open from 7 a.m. to 7 p.m. on Saturdays.

“Jerry should write the book on ‘small is beautiful,’” Karen adds. “I give him a lot of credit, because J. Gordon is a 960-square-foot salon and he was a giant within it. It’s not the size of the business, it’s who you are within it.”

Even Horst Rechelbacher, founder of Aveda, was a fan of J. Gordon Designs and a good friend of Jerry.

“The salon was one of Horst’s favorites because it was focused on beauty,” Karen says. “Clients always felt the owner’s presence here. And people want to see the name on the door—he was the magic. We live above the business in a brownstone building and he was always there, even if he wasn’t working.”

Even the clients who saw another stylist in the salon knew Jerry and felt his personal touch. “He would compliment someone in another chair as he walked past,” Karen says. “We used to joke if he couldn’t do hair he’d become the salon’s maître d’.

“Jerry was so full of life—he really had a light within him. His energy was infectious and his storytelling was pretty epic. We miss that.”

BE A LIFELONG LEARNER

When Tony, Jerry’s son, opened his own salon, he made the decision to expand to multiple locations when he began to grow (Gordon Salon has three locations with a fourth opening soon).

“I asked him if he wanted to do a location with me and Jerry said, ‘No, you do that yourself. I’ve gone around the country and talked about having one location and double shifting,’” Tony says.

“But he was supportive of my endeavors because it was my vision,” he adds. “I was a master sergeant in the Air Force—my background was different than his as a hairdresser straight out of high school doing hair in the Sassoon era.

“He felt reading opened the world to you, and he loved a great storyteller. He read about business and economics in the Wall Street Journal and fashion, food and culture in the New York Times,” Karen says.

Tony adds, “He was an intellectual and a student of life, as well as a teacher. And, he could correlate hair to what was going on at the time.”

In the salon, Jerry’s apprenticeship program was a source of pride.

“He took young people right out of school or who came to us from out of state and put them through a system we designed to make them proficient,” Karen says. “He really wanted people to develop hard and soft skills.”

Stylists at J. Gordon are taught how to talk to clients going through tough times like a divorce or death in the family in addition to honing their technical skills.

“And he put some people through college, including me, even when it wasn’t related to hairdressing,” Karen says.

His dedication to education became inspirational to many, including his wife.

“I was once at Intercoiffure without him and told him over the phone that I planned on bailing on the last speaker to go shop. It was a speaker I had already heard—and enjoyed—before, and didn’t feel I needed to hear the message again,” she says.

Jerry, who understood the value of hearing something over and over again, told her to stay, even if it was just to take away one piece of information.

“I came away from the speaker in tears because I was so moved by the message.”

The clients who came to see Jerry also became a part of his daily quest to learn. Educated, dynamic, intelligent women sat in his chair every day, sometimes traveling quite a distance to see him. “They enjoyed the conversations just as much as the haircut,” Karen says.

“But when Jerry started racing, he was terrible,” she says. “So he took a lot of classes and raced all over the country and Europe. He just kept going back to it until he learned to be good and drive that line perfectly.”

Jerry brought that same mind set to running his business.

“He was so disciplined in how he handled his books, front desk, processes and procedures—every detail—that we used to joke he was Rain Man,” she says. “Jerry said success is hard work, and he was right.”

Karen adds, “I see a lot of hairdressers who want to go fast and then they have to spend time going back and correcting. Jerry was very much about learning basics and fundamentals. He loved to train, whether it was in racing or hairdressing.”

After Jerry passed away, Karen, his employees and manager were left with a business in good shape with sound, solid procedures. 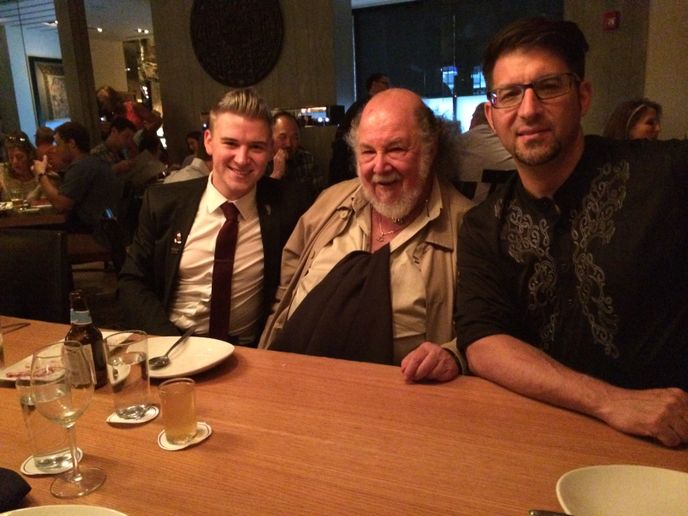 Tony also appreciated his dad’s controlled methods and regimens in the salon and in life.

“He believed in facing the truth and doing the tough stuff,” Tony says. “He taught his hairdressers and other owners to be very disciplined in their work—bringing in bank deposits, paying employees on time, doing great work—he believed you must be able to step up and deliver, which was a big take-away for me,” he adds. “It’s the one aspect of him I really emulate a lot—being disciplined.

“My father was a warrior in his soul and spirit, and while many people were entertained by what he said, there was a lot of edge to it,” Tony says.

“He would make a joke, but it was forceful stuff he was communicating. He was funny and smart—a disciplined, tough soul.”

Horst Rechelbacher was one of his mentors, and in later years, Nick Arrojo became one.

“It became a cross-mentorship,” Karen says. “Nick and Jerry would talk all night about business and how to resolve business issues. You need someone you can tell everything to in confidence and give something back, too.”

And though Jerry was a mentor to his own staff, he felt it was important that his predominantly female stylists have a female mentor as well. “He sent many of them to study with Vivienne Mackinder,” Karen says.

Gordon Salons also has a mentorship program to help accelerate stylists and make them comfortable in the salon’s culture.

“Everyone is assigned a mentor,” Tony says. “They can request a mentor, too—we don’t want to pair them with someone they dislike.”

Karen says in Jerry’s passing, she has been touched by the number of people who have talked about him as a mentor.

“A true mentor never dies—they stay inside you. Our staff was all trained and touched by Jerry—he’s deeply ingrained in who they are,” she says.

FIND JOY IN YOUR WORK

He always said you’ve got to find just one client every day—whether it’s the finish or the cut—that you do for yourself to get the ultimate satisfaction, passion and joy from your job.

“We put a lot into the people we service,” Karen says. “That’s why Jerry felt you had to do one for yourself. But he also realized doing this comes with age and maturity and that some stylists may not even know when it happens.”

When Tony trained under his father—he was his assistant for a year—he knew he was witnessing an artist at work.

“I could see him get into that artistic moment—that creative place where his hands would just take over,” he says. “He was into the art of practicing hairdressing. He could comb and move hair and it would just fall into place.”

While Jerry’s creativity and technical skills were impressive, it was his incredible zest for his craft that made the biggest impression. “He would attack the day,” Tony says. “That’s what made him so compelling.”