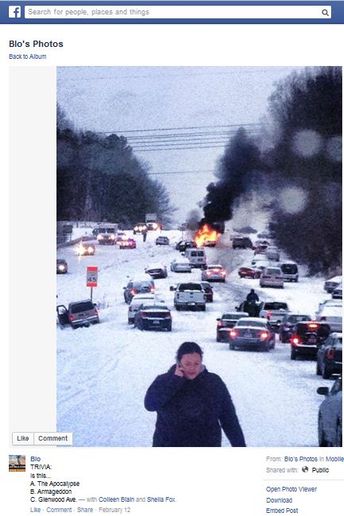 When the salon closed early February 12, 2014 due to a monster snowstorm, team members who had four-wheel-drive vehicles were helping other staff get home. Traffic was a nightmare because the storm hit just before rush hour, and Nunes received this image from a team member who was stuck on a residential street less than a mile from her home for more than four hours. Nunes, who also was stuck in traffic, posted the pic to the salon’s Facebook for entertainment purposes, and the image went viral. Within hours, Blo was on ESPN, CNN, The New York Times, Gawker and countless other news outlets.

“To maximize the opportunity, we reposted the image several times offering $10 gift cards to anyone whose car appeared in the image—we actually gave away $120 in Blo gift cards,” Nunes reports.