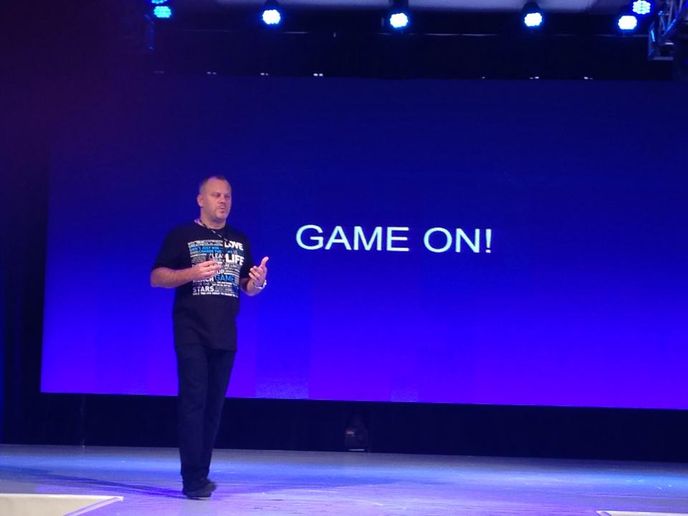 When you think about it, the standard industry conference is fairly formulaic. You have the invigorating welcome, the motivational speaker who brings the audience to their feet, the down-to-business breakout sessions, and the networking party.

Just as we were wrapping up the final pages of this special annual technology issue, I had the opportunity to attend the 2014 Millennium Experience in Fort Lauderdale, Florida, along with

Angela Reich our East Coast sales director. Before it started, I took a quick glance at the agenda, which promised some inspiring speakers and educational sessions and I was getting myself into note-taking mode. As we took our seats, an electronic female voice—reminiscent of a dance party video game—invited us to take out our phones, log onto playTME.com, and take our place on one of four color-coded teams. Immediately, all the stylists and salon owners who filled the ballroom were busily tapping their phone screens in order to gain enough points to launch their team’s rocket ship across the finish line.

This engaging activity, which woke us up better than an early morning cup of coffee, was the perfect introduction to Millennium Systems International Founder John Harms and this year’s ‘Game On’ theme. It also reshaped the conference experience for the entire audience.

Throughout the three-day conference, Millennium continually to engage participants by inviting them to play. General sessions all started with an audience participation trivia quiz. A live feed display on the onstage-screens let the audience post pictures and comments as the speakers gave their presentations. Every once in a while, the audience would explode in laughter at a post, causing the speaker to turn around and get in on the joke. During the breakout sessions, attendees could rate their educators and post questions.

Throughout the event, participants could rack up points by posting messages, photos, reposting, answering surveys and checking in to sponsors. And, like all great games, there were prizes at stake. Todd Tryall, from Sage Tryall Salon, accumulated the most points overall during The Millennium Experience and won a year of Meevo, Millennium’s latest generation of salon management software. Faith Adorno, from Jennifer James Hair Color Xperts, had the most shared posts during The Millennium Experience and won a Surface Pro.

The engaging activity and the ‘Game On’ theme dovetails nicely with Millennium’s release of Meevo. The software’s Success Center allows salon/spa owners to challenge staff to be more productive by honing in on certain Key Performance Indicators and set up competitions. Leader boards posted in the staff room can show live totals throughout the day, and staff can earn tokens, digital trophies and charms when they reach certain goals set by management. Staff can cash in their tokens for prizes set by management or they can gift tokens to other staff members as a way to thank each other.

“By utilizing the science of gamification with goal attainment, we can get employees excited about knowing their numbers and hitting their milestones--even challenging them to hit the highest average ticket or best prebook numbers in a way that is exciting and unique,” Harms says. “The future salon can finally have what every salon in the past has wished for – excited, engaged employees who are talking about their numbers and excited about both their own success and the salon’s”.”

Bottom line, gamification is a game-changer. It’s promising to engage salon teams like never before, just like the Experience’s audience was engaged from the first rocket ship game. And to that, we say, “Game On!