Andrew Arrojo’s career at Arrojo Studio in New York started long before there was social media—at a time when most salons were still trying to wrap their corporate minds around a salon website. After graduating with a double major in English and history, Arrojo worked in London with the creative marketing company ‘What If?!, then as a features writer for an international magazine, before his brother Nick Arrojo lured him across the pond in 2005 to put a stamp on the Arrojo brand.

As digital communication avenues, as well as Arrojo Studio’s advanced education and manufacturing businesses, took off, Arrojo’s role evolved. “The important thing was to be able to share our message, both as a company and as hairdressers,” he says. “We wanted to be a leader, and now because of the digital evolution, every company can become the publisher of their own story. If you can produce high-volume content, clients can recognize who you are and what you stand for. They can understand your mission and our philosophy.” 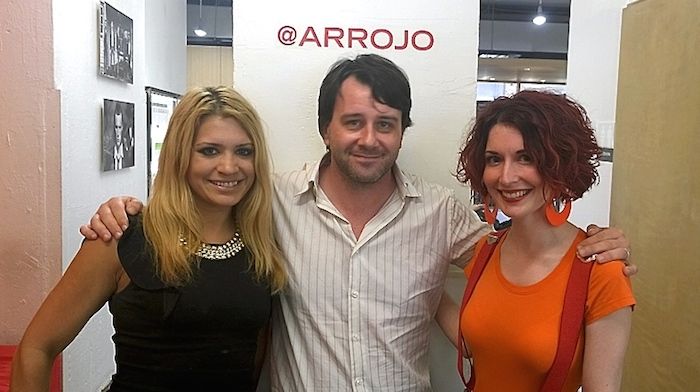 When the Arrojo brothers witnessed the emergence of the digital world emerging around 2010, they instigated an innovative project, inviting 30 of New York’s biggest bloggers into the salon, treating them to services and showering them with free products. “We were one of the first ones to jump on that, and the bloggers wrote about our salon and services which gave us traction in the digital marketplace, which helped grow our social media networks exponentially.”

Since then, the salon has built a strong presence on Facebook, Twitter, Instagram and Tumblr and launched its own creative hair inspiration blog, StyleNoted.com. While Arrojo pens many of the blogs, he also taps other professional writers, like the salon’s social media coordinator Kelly Rowe, to create the posts which feature professional photography and highlight trends, techniques and celebrity inspiration. Highly prolific, the blog averages post four daily on Monday through Friday and two per day on Saturday and Sunday. And, it attracts 60,000-75,000 visitors per month—a mix of 70 percent potential clients and 30 percent stylist community. While the blogs are more editorial than promotional, they will mention the products used to create the look, and are accompanied by ads for the Arrojo product line.

“We also invite hairdressers to submit their own work and will give them credit on our site,” Arrojo says. “It’s a great option for people who are passionate about hair, and it sparks conversation with like-minded people who enjoy their blog posts.”

While other staff members are involved in content development for both the blog and the salon’s website, Arrojo maintains his role as gatekeeper of the salon’s brand and sets the tone for the brand’s public voice. The voice, says Arrojo, is direct and comes from a place of honesty and integrity with a specific styling point of view. “We don’t use the voice to tie our writers down, but rather use it to coach and guide them,” he says.

When it comes to social media, all of the salon’s staff members are invited to participate by developing their own posts. To encourage staff to take more photos of and with clients, Arrojo even designated a space in the salon for candid captures. A white wall features a large red ‘@Arrojo’ (the salon’s Twitter handle), creating a permanent, step-and-repeat spot for branded images.

“We do have to be careful with social media, because we do have two distinct audiences—we have the clients of the salon, but we also have a professional audience who carry the Arrojo line in their own salons or take our advanced educational classes.” While the salon’s traditional website, arrojo.com, caters to a broader public audience, Arrojo also created ArrojoSocial.com as a Facebook-style site to engage professionals and showcase the salon’s educational offerings.

Like most salons, Arrojo’s most popular posts are before and afters, especially when they are real and transformational, says Arrojo. “But we use many other mediums to tell our story as well. A few years ago we hired a graphic designer to create a mood board, we use Picstitch to make simple graphics and we shoot quite a bit of editorial videaos as well. For example, we produced a video on our American Wave service, posted it on StyleNoted.com and sent it out with an email blast and that produced quite a bit of media coverage for us.”

The physical space of the salon--which is a 13,000 square-foot, open-plan facility—is conducive to taking candid shots for social media, says Arrojo.“Sometimes I just walk out onto the floor, observe what’s happening and take a quick picture for our social feeds, and we’re always posting great work from our staff,” he says. “For example, I had a staff member who posted an image three days ago and has already received eight new client requests because of it. And, Corrinn Dian is one of our stylists who is amazingly active on social media and when we hosted a booth at Premiere Orlando, we had several stylists stop by and ask for her because they follow her work through social media.”

“When my brother Nick was younger, we would meet people in public and give them a card,” Arrojo continues. “Social media is the new business card for today’s stylist and it’s a more direct way for them to showcase their talents—it’s empowering for both the stylists and the clients who can research different options and find the stylist who is the best choice for them.”