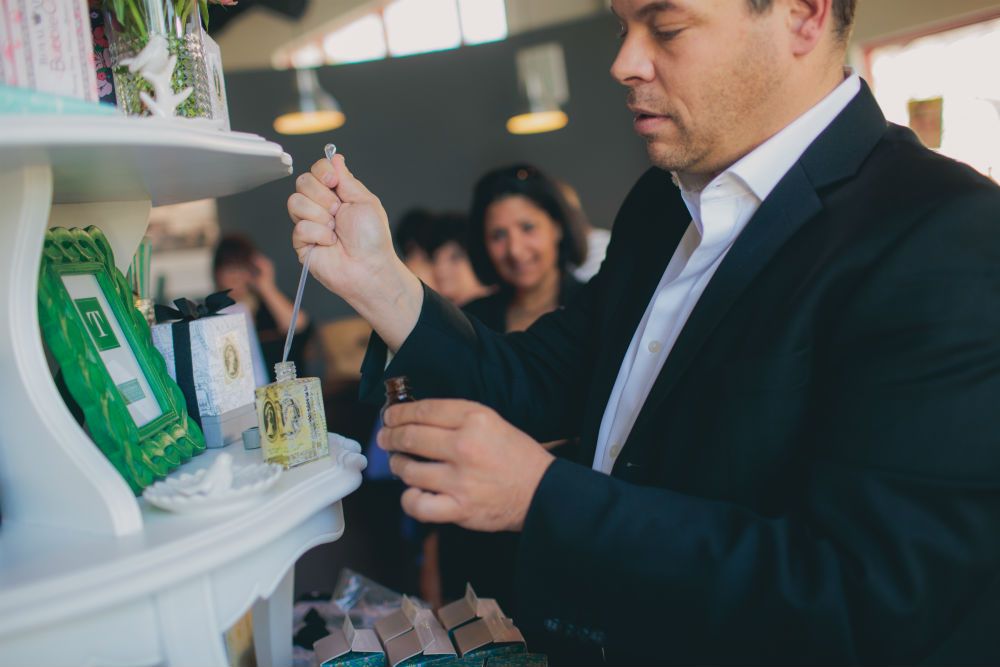 During the Salon Roux retail event, Sean OMara, founder of Royal Apothic, custom blends a fragrance for a client. Photo by Lindsey Gomes. 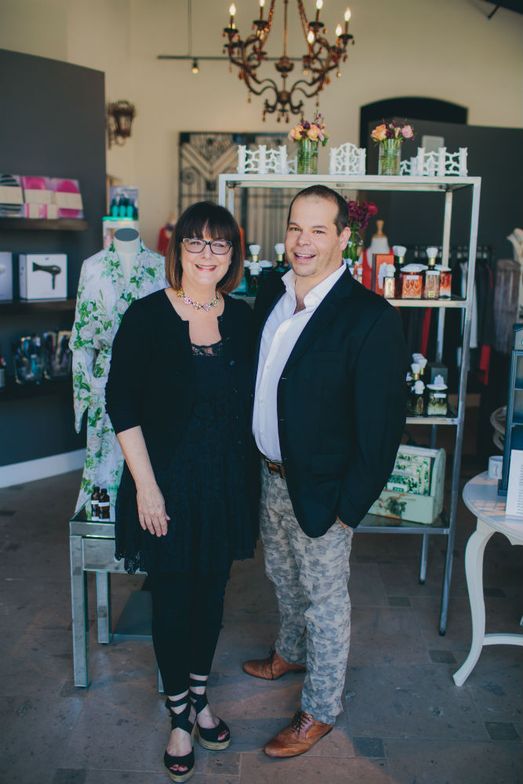 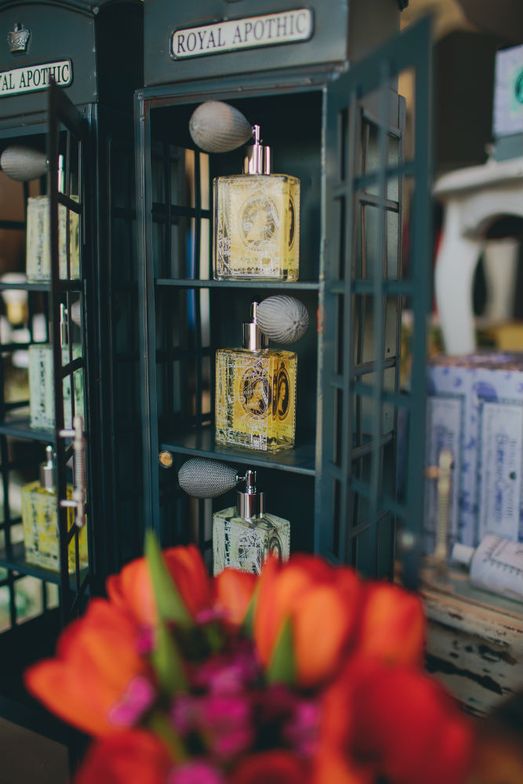 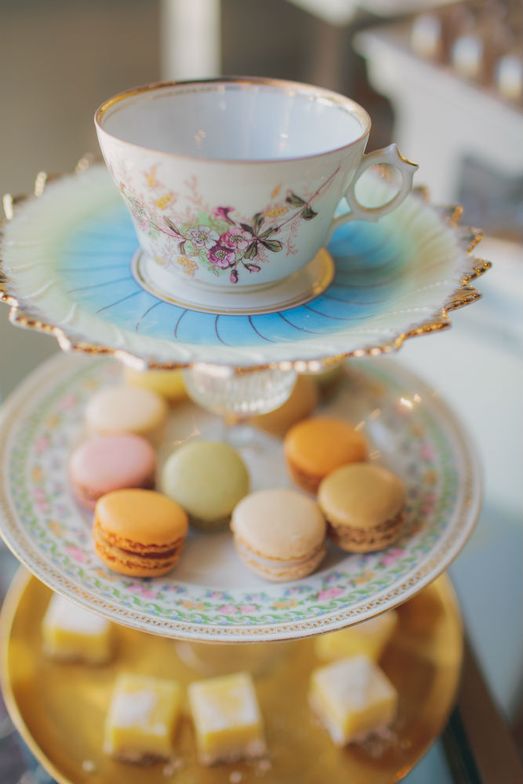 To elevate the guest experience, Leonard served macarons and champagne at the retail event. Photo by Lindsey Gomes. 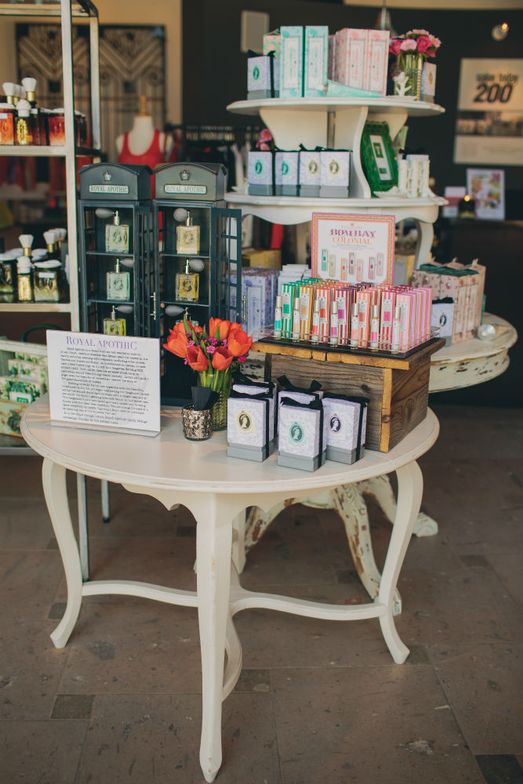 One of the Royal Apothic displays created for the Salon Roux event. Photo of Lindsey Gomes.
1/7
View all

6/7
Slider
To elevate the guest experience, Leonard served macarons and champagne at the retail event. Photo by Lindsey Gomes.

7/7
Slider
One of the Royal Apothic displays created for the Salon Roux event. Photo of Lindsey Gomes. 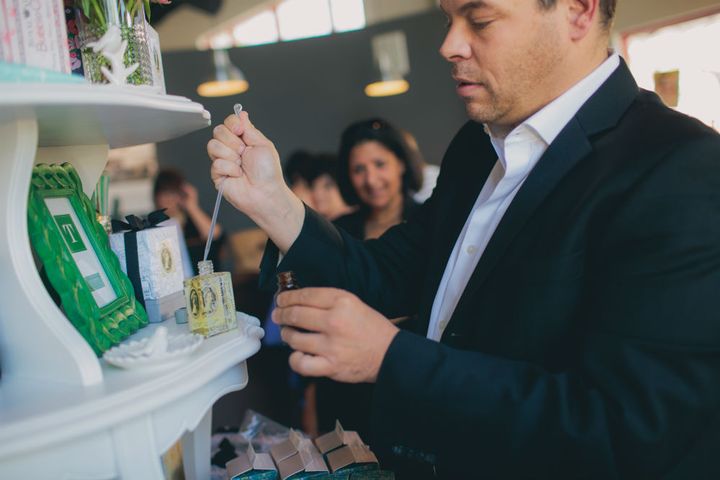 Close to half of Salon Roux’s space is dedicated to its bustling retail boutique, and that’s exactly how owner Jacque Leonard designed it. With her own roots in sales as a former Sebastian account executive, she frequently designs tantalizing retail displays and plans engaging client events.

Recently, Leonard searched for a personal and home fragrance line to compliment her hair care, skincare, clothing and jewelry offerings for the salon based in Paso Robles, California. While the central coast town boasts more than 200 wineries, dozens of farm-to-table restaurants, and a steady stream of tourists, there’s not a traditional shopping mall for 100 miles. “We really saw an opportunity to carry quality fragrances, and thought they would be successful with our clientele.”

Leonard started investigating, and was intrigued by Royal Apothic, a line she found at an Anthropologie store when she was out of town. She perused the company’s website, emailed the general mailbox and asked if they would consider letting a salon carry the line.  “Before I knew it, I received an email back that read, ‘Is this THE Jacque Leonard from Sebastian International?' I had no idea that the company I had been investigating was founded by a friend and former Sebastian colleague of mine that I had lost touch with!”

While Leonard left Sebastian to pursue salon ownership, fellow account executive Sean O’Mara continued to grow in the ranks at P&G, eventually nurturing brands like Sebastian, Wella and Trucco Makeup, before making his way over to Murad Global Skincare. Throughout his professional beauty career, he simultaneously pursued a passion as a designer, infusing glamour into lackluster spaces in Los Angeles and in London. On a trip to London in 2009, O’Mara’s fate took a turn when he discovered a centuries-old apothecary manual on the top shelf of a book stall in Notting Hill. The book sparked an idea that eventually transformed into the Royal Apothic line.

Leonard and O’Mara not only got reacquainted after the email exchange, but Leonard signed on to carry the line, and the two began planning a retail release event that coincided with Leonard’s regularly scheduled third Thursday retail events that offer clients exclusive retail opportunities in a fun, day-long party atmosphere. O’Mara agreed to make an appearance at the event, educating guests about the Royal Apothic line, interviewing them about their own personal preferences and customizing their purchases with selections from his collection of fragrance notes.

The night before, Leonard and Cory Bauer, Salon Roux’s salon and spa creative director, worked to create beautiful retail displays with the line’s perfumes, parfumes, candles, room sprays, hand crèmes, soaps and lotions. Befitting the occasion, they brought in champagne and French macarons. “The event was a fun surprise for our guests and a huge hit,” says Leonard, who says the salon did about $5,000 in retail sales the day of the event. “Clients were impressed that the owner of line was here to help kick it off, and loved having him  custom-blend their fragrances.”

In the weeks since, Leonard says the line has been a welcome addition. “We’ve found that having a fragrance line is a great way to draw guests into our retail and engage them by creating an individual experience when they sample something.”

How Stylists Can Sample to Capture a Future Sale

Three proven tactics on how to follow up on a sampling campaign and all are guaranteed to bounce your revenue forward and ensure you capture future sales dollars.

In partnership with STX

Buying Salon Software? Here’s What You Need to Know

Don't forget to consider these things before you go all in with your new salon software.

Preserving the Professionalism of Beauty

With SalonInteractiver, retail is back in the hands of the salon professional and the entire industry benefits.

Profiles in Leadership: Lupe Voss is Always Looking Ahead

Lupe Voss, the owner of Julian August Salon and the founder of the hair color education company Hair Color Magic, is the consummate educator. In an exclusive one-on-one with SALON TODAY, she discusses her leadership style and the life journey that brought her where she is today.

When accountants study an e-commerce system like SalonInteractive, they calculate the savings that go deeper than owners realize. Kopsa Otte's April McDaniel lists the benefits.

The past decade has been a wild ride for professional beauty brands as big box stores, e-commerce, and drug and grocery stores have joined the mix. But now, SalonInteractive is re-routing professional products back to salons and beauty professionals.

Salon management software keeps your client information and financial data safe and secure while reducing the risk of fraud and theft.

Modern Luxury: Does Your Salon Space Have it?

When was the last time you entered a business and felt a sense of bliss and peace the moment you walked in the door? Michele Pelafas, a leading interior designer in the spa and salon industry for more than 20 years, says the modern definition of luxury encompasses much more than furniture and finishes.