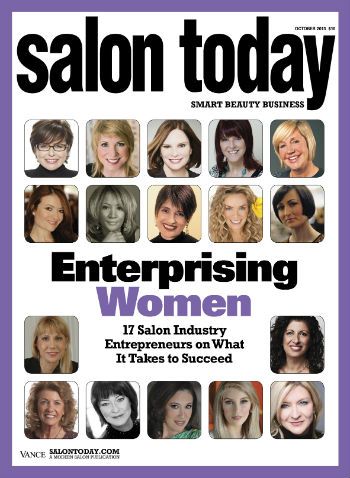 Years from now, history books will highlight our slice of the timeline as one of this country’s most profound social transformations. As more and more women rise to executive positions within our corporations or forge their own businesses, the fabric of American business is constantly recasting itself into exciting, more intricate patterns.

In the past decade alone, the number of female-owned businesses has escalated substantially. According to the Los Angeles Times, the number of businesses owned by women in the United States has increased 59 percent since 1997. Today, female-owned businesses have an economic impact of $3 trillion in U.S. sales, and create 23 million jobs. “These jobs not only sustain the individual worker, but contribute to the economic security of their families, the economic vitality of their communities and the nation,” says the National Women’s Business Council.

Nowhere is that more apparent than the professional beauty industry, which historically has supported the growth of female-owned businesses. According to the Professional Beauty Association’s 2013 “Economic Snapshot of the Salon Industry Report,” 61 percent of all US salon businesses are owned by women, while only 30 percent of businesses in the overall private sector are female-owned. And, the world of beauty significantly contributes to rewarding jobs for women—84 percent of individuals in personal appearance occupations are women, compared to the fact that women make up 47 percent of the overall US workforce.

With women assuming more leading positions throughout our corporate world, it’s shifting the way America does business. When Arianna Huffington, co-founder and editor in chief of the Huffington Post, addressed salon owners and managers at this year’s PBA Symposium, she eluded to this shift in corporate mentality as the latest development in The New Women’s Revolution. “First women fought for the right to vote, then for equality and equal pay,” she said. “Now they’re changing business. In boardrooms, it’s been common to use war metaphors and sports metaphors when talking about business and your competition, but now language is starting to be more inclusive and talk about concepts like teamwork.”

And, as leaders, women are changing the way today’s business world takes charge. According to a study on women’s leadership by Caliper, successful women leaders are assertive, persuasive empathetic, willing to take risks, outgoing, flexible and have the need to execute. “These qualities combine to create a leadership profile that is much more conductive in today’s diverse workplace, where information is shared freely, collaboration is vital and teamwork distinguishes the best companies,” says the study.

Corporate mentality has progressed from “command-and-control” ( the 1980s) to “empower-and-track” (the 1990s to mid-2000s) to “connect and nurture” (today). For SALON TODAY’s 2013 special women’s issue, we’re celebrating 17 female leaders and entrepreneurs,  who’ve embraced this connect and nurture style of leadership to grow themselves, their brands and their companies to new levels of success.

Meet our Enterprising Women of 2013: