When Aveda launched its new Invati system for thinning hair, Paris Parker was excited about the sales possibilities of a previously untapped market. While Aveda was running a national television campaign, Paris Parker wanted to make more of a local impact, so it worked with Imaginal Marketing to design exterior signage for one of its most affluent and visible salon locations. “The location’s windows are highly visible from both the street and sidewalk, and while the window art causes a stir, you can see through it from the inside, so there’s no feeling of enclosure,” says Neill Baker. “ We used the same images and fonts that were used in Aveda’s commercial so there is immediate consumer recognition, so we’re leveraging the momentum of their national campaign. Since signs went up, retail sales have jumped 50 percent.” 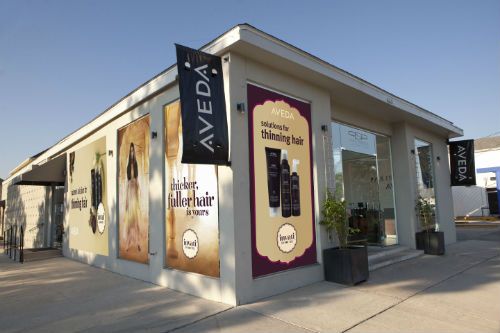 In partnership with Vagaro

Back to Business: Growing and Thriving Post-Pandemic

Ready to have a thriving business in 2021? Vagaro has the tools to help you grow your business to achieve all your goals. Find out how in this interview featuring Fred Helou, CEO of Vagaro and India Bertin, a business owner who used Vagaro to rebuild after stay-at-home orders.