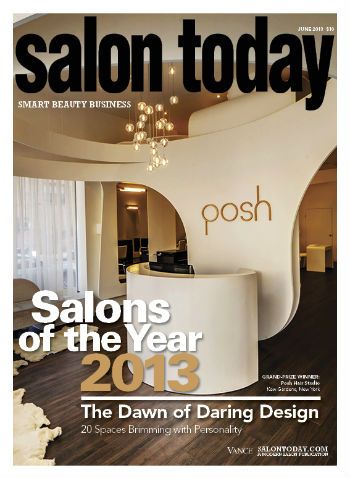 After the recession struck in 2008, the salon and spa owners who were brave enough, and financially stable enough, to launch a new salon or undertake a major renovation in the following years tended to proceed cautiously—making conservative design choices and taking few risks. These salon architects continued to create gorgeous spaces, but as a group, they tended to design for the status quo and often the end results looked quite similar.

But with the entries into the SALONS OF THE YEAR 2013, the SALON TODAY team is officially declaring the design drought over. This year, entries were markedly up—nearly 40 percent over the past five years— and immediately our team noticed that these owners were making bold, creative, and even humorous choices that took direction more from the owners’ individual personalities than they do from global economic pressure.

Today’s owners are continuing to reshape the client experience. Most applicants had a version of the color bar or color table where clients can interact with one another or pull out their iPad, while their colorist mixes their formula. Others chose to integrate their own version of the blowdry bar into their design, capitalizing on that fashion trend. And, many more factored men into their equation, carving out a separate ‘man cave’ for male-specific services.

Check out all of the images the SALONS OF THE YEAR honorees submitted by visiting each of the honoree's stories below.