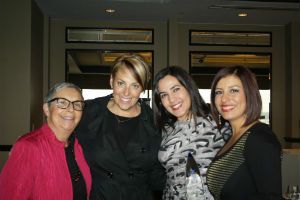 Karla Lopez-Martinez, co-owner of the Gila Rut Aveda Salon-Otay Ranch Town Center, was named ‘Emerging Entrepreneur of the Year’ 2012 by the National Latina Business Women Association- San Diego. Ms. Lopez-Martinez received the prestigious award at the recent NLBWA Awards of the Year Luncheon Gala in December at the University Club San Diego.  The theme of this year’s event was ‘Our Women in Motion’.

According to Karla Lopez-Martinez, she is proud to have received NLBWA’s ‘Emerging Entrepreneur of the Year’ Award.  “I am extremely honored to be recognized for my business achievements by such a respected and prestigious organization. I also applaud NLBWA for their efforts in promoting, developing and supporting the rapid growth of Latina-owned business and Latina professionals by increasing their efforts in business development, networking and mentoring.”

NLBWA’s ‘Emerging Entrepreneur of the Year’ Award is presented to an outstanding individual who has established an emerging business venture.  The category criteria includes being in business for less than three years; notable and/or accelerated company growth and presence in the marketplace; and support in and/or participation in specific NLBWA - San Diego activities over the current year.