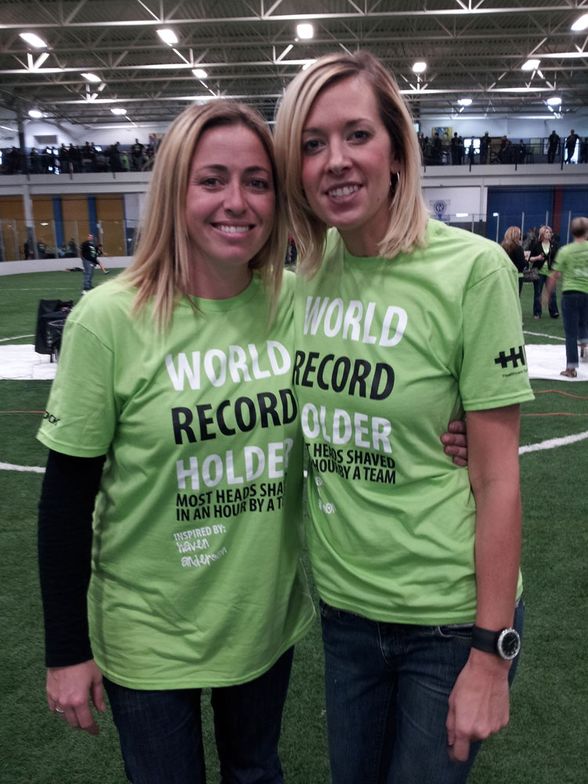 Shannon Lopez and Naomi Prusinski, co-owners of Roots Salon in Milwaukee, organized the Be Brave and Shave fund-raising event for childhood cancers. 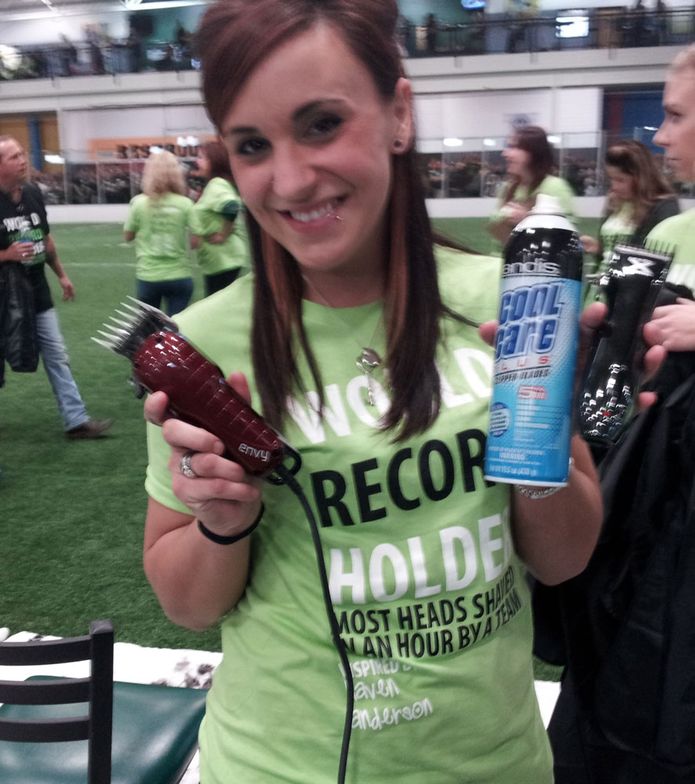 Roots stylist Jeanette Schneider is ready to shave heads with her Andis tools. 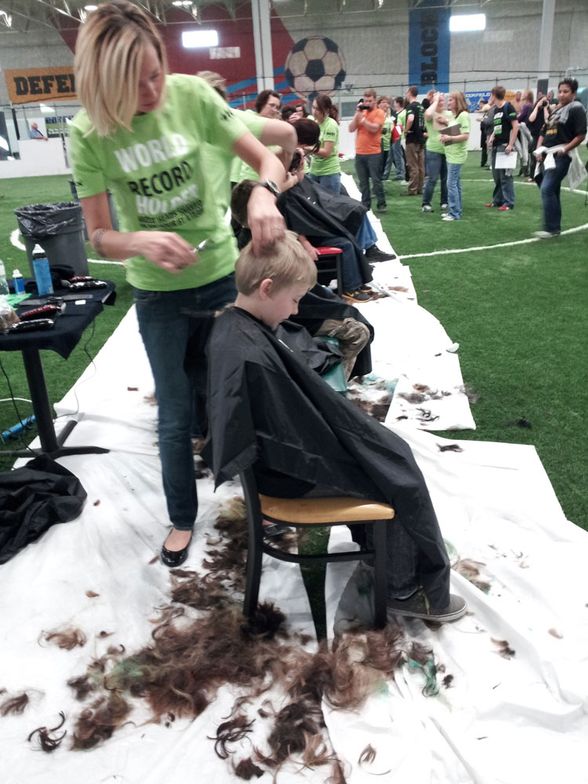 Roots Salon co-owner Naomi Prusinski preps a young participant in the Be Brave and Shave event. 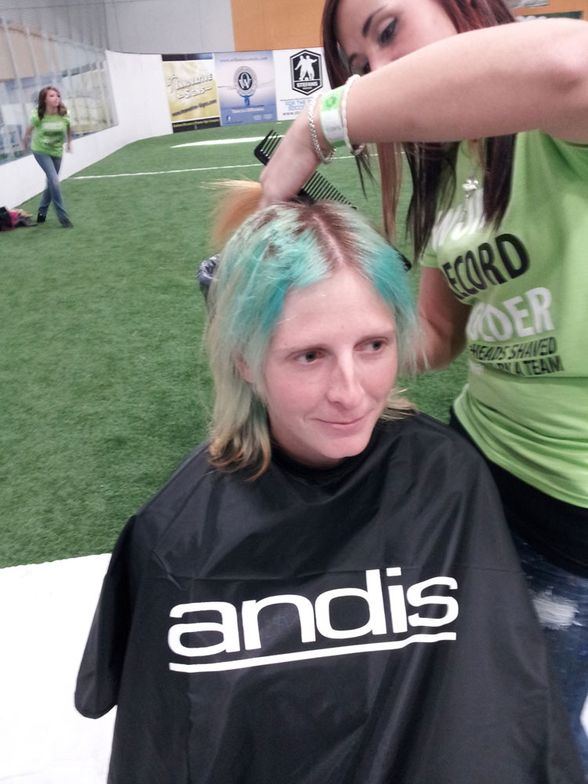 Lindsay Allard, with teal hair color for ovarian cancer awareness, prepares to shave it all off. 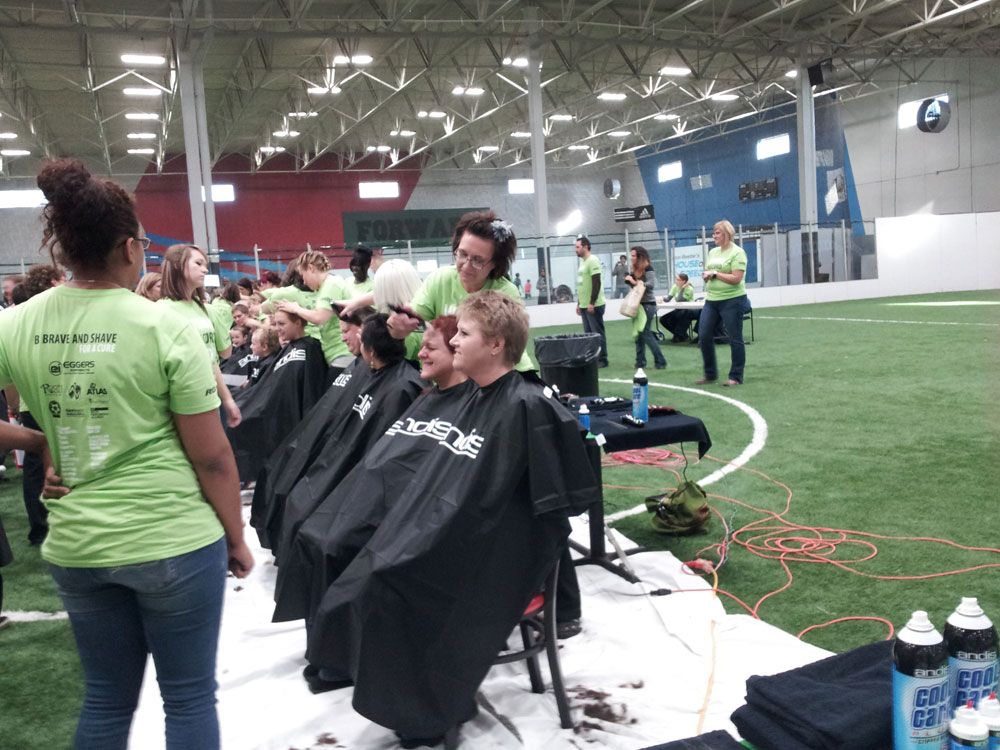 Stylists begin the first round. 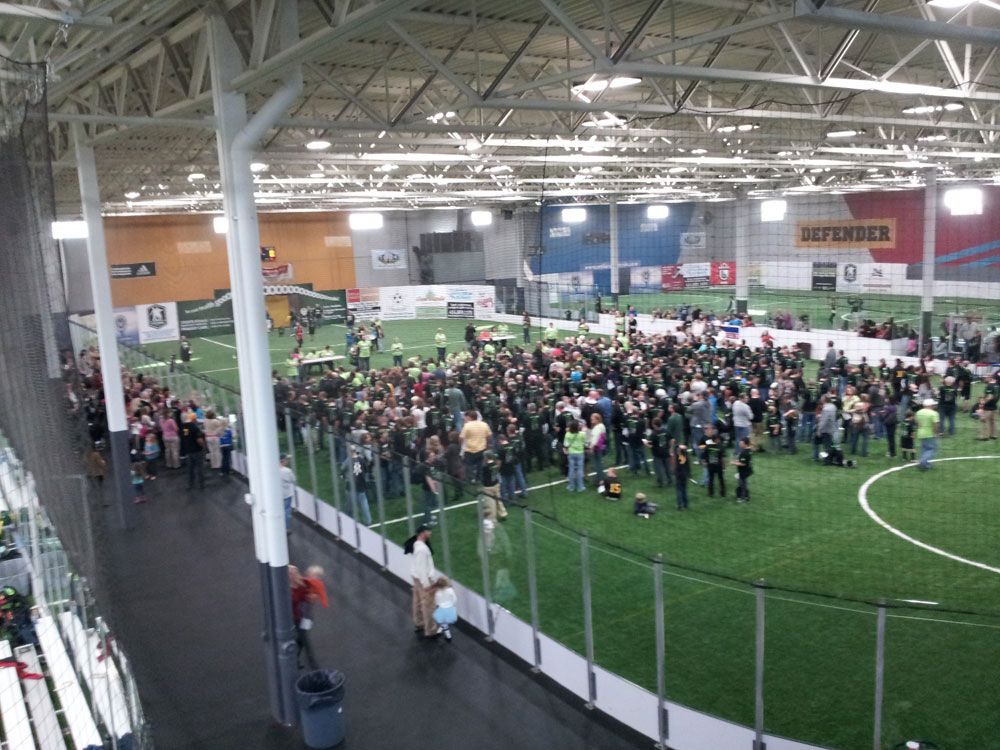 The crowd gathers to participate in Be Brave and Shave for a Cure.
1/7
View all

2/7
Slider
Shannon Lopez and Naomi Prusinski, co-owners of Roots Salon in Milwaukee, organized the Be Brave and Shave fund-raising event for childhood cancers.

5/7
Slider
Lindsay Allard, with teal hair color for ovarian cancer awareness, prepares to shave it all off.

6/7
Slider
Stylists begin the first round.

7/7
Slider
The crowd gathers to participate in Be Brave and Shave for a Cure.

On Sunday October 21, a fun-filled and life-affirming event took place just mere hours after and eight miles from the horrific shooting at Azana Salon and Spa in Brookfield, Wisconsin. At The Brookfield Soccer Complex, in the same Milwaukee suburb, a veritable mob was gathering to eagerly have their heads shaved to fight cancer.

Be Brave and Shave for a Cure was a fund-raising event for cancer research and a successful attempt to break the Guinness “most heads shaved in one hour” world record. The previous record of 318 heads was set in Ireland in February 2011, but on October 21, that number fell when 371 heads were shaved to set a new record for the Guinness book.

At the helm of Be Brave and Shave were Naomi Prusinski and Shannon Lopez, co-owners of Roots Salon, with three locations in the Milwaukee area, and Andis Company who donated all the professional tools.  A team of 10 stylists from Roots were ready for the brave souls who took a seat to shave their heads in support of CureSearch for Children’s Cancer. Breaking the world record was incidental to helping cancer patients like two-year old Haven Anderson who inspired the event and whose mother Erin Anderson is a life-long friend of both Naomi and Shannon.  Milwaukee radio personality Wes McCain emceed the event and gave directions to the crowd that jammed the indoor soccer fields eager to make a difference for Haven and all cancer patients and their families.

“You are all very brave,” said Erin Anderson. “Your hair is a part of you and I can’t thank you enough for giving a part of yourself for Haven.”

None of this could have happened without clippers, and the Guinness Book of World Records is specific about the professional tools that must be used in an official world record attempt. Andis donated all the necessities—Envy Professional Clippers, Experience Cordless Clippers and SuperLiner Trimmers as well as combs, clipper oil and capes.

“We are so grateful to Andis,” said Shannon. “And, it is wonderful that they are a local company, based in nearby Racine.”

Many of the participants were men and boys, but there were also plenty of women who took the buzz, inspired by Haven, by personal friends or family members, or just by a desire to wipe out this devastating illness.

A grassroots effort of social media, a special web site and word of mouth by Roots Salon and a media alert from Andis encouraged generous donations and a contagious community spirit in a community that was reeling from earlier events. Each shaved head was documented by authorized witnesses and each participant’s name will be noted. Visit worldrecordshave.com, myrootssalon.com and andis.com.